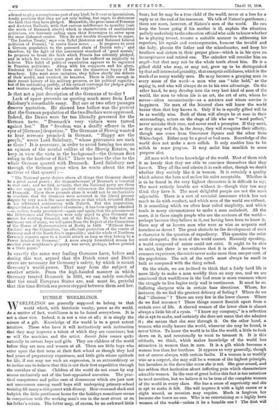 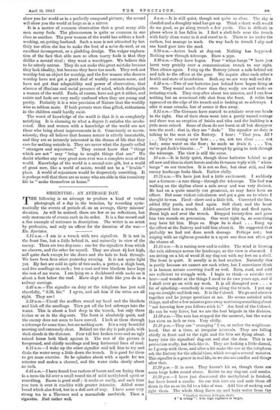 W ORLDLINGS are generally supposed to belong to that world which, with histrionic vanity, poses as the world. As a matter of fact, worldliness is to be found everywhere. It is not a class vice. Indeed, it is not a vice at all ; it is simply the misuse of a gift. Knowledge of the world is to a great extent Intuitive. Those who have it will instinctively seek instruction that they may improve a talent of which they are conscious; but so will the musician and the artist. Savoir faire comes quita naturally to certain boys and girls. They are children of the world before they are men and women at all. There are little boys who enter upon the first term at their first school as though they had had years of preparatory experience, and little girls whose aptitude for life, if one may use such an expression, is so extraordinary as to incline one to believe that this is not their first expedition through the corridors of time. Children of the world do not come by any means exclusively out of the best-appointed nurseries. The prac- tical competence and polite ease of demeanour which are just now not uncommon among small boys still undergoing primary-school training fill many a rich parent with dismay. How cross and slack and babyish the little gentleman home for the holidays sometimes seems In comparison with the working man's son in the next street or on his father's estate. The latter may, of course, be an awkward little boor; but he may be a true child of the world, never at a loss for a reply or at the end of his resources. We talk of Nature's gentlemen ;

there are more, however, of Nature's men of the world. He can keep the house going if his mother is ill, explain the situation politely and calmly to the education official who calls to know whether he is playing truant, assume a suitable manner in addressing his superiors, his equals and contemporaries, humour the invalid and the baby, placate the father and the schoolmaster, and keep his brothers and sisters in their proper place—which is in his eyes an inconspicuous and retired one. The onlooker will consider him an angel—but that may not be the whole truth about him. He is a gifted child who may, or may not, grow up to be distinguished by that sell-interested geniality, that energetic selfishness, which is the

mark of so many worldly men. He m ay become a grasping man in every sense of the word—a man who can "take hold," as the saying is, and who will always do so to his own advantage. On the other hand, he may develop into the very best kind of man of the

world, the man to whom life is an art, the art of arts, whom he serves—often unconsciously—as a mistress and whose service is happiness. No man of the leisured class will know the world better than that boy knows it. Only if he is equally gifted will he be as worldly wise. Both of them will always be at ease in their surroundings, actors on the stage of life who are "word perfect," never mistake their cues, and never need a prompter. If they meet, as they may well do, in the Army, they will recognize their affinity, though one come from Grosvenor Square and the other from Whitechapel. Either may be a good or bad man. Knowledge of the world does not make a man selfish. It only enables him to be selfish to acme purpose. It may make him unselfish to some purpose also.

All men with to have knowledge of the world. Most of them wish it so keenly that they are able to convince themselves that they have it. They all like and admire it in each other, though we doubt whether they entirely like it in women. It is certainly a quality which adorns the hero and makes his valet acceptable. Whether it is to be found in the very highest characters it is difficult to say. The most entirely lovable are without it—though they too may think they have it. The most delightful people are not the most adjustable. There is a sort of essential innocence which has not much to do with conduct, and which men of the world are without. It is something which we often hear called simplicity, and which tends in many circumstances to make a man maladroit. All the same, it is these simple people who are the saviours of the world— perhaps because they believe in it, not having been born to know it. Have any of us known men who were as wise as serpents and harmless as doves ? The great obstacle to the development of such a character is the question of expediency. This question the saint must disregard ; the man of the world cannot. Humanly speaking, a world composed of saints could not exist. It ought to be able to exist, but there is no evidence that it is able. According to common experience, the saints never make more than one per cent. of the population. The salt of the earth must always be small in bulk as compared with the thing salted.

On the whole, we are inclined to think that a fairly hard life is more likely to make a man worldly than an easy one, and we are convinced that worldliness in the bad sense is more common where the struggle to live begins early and is continuous. It must be so. Suffering sharpens wits in certain base directions. Where, for instance, do we find the greatest delicacy of feeling ? Where do we find " illusions " ? There are very few in the lower classes. Where do we find romance ? These things cannot flourish apart from a certain ease of life. A shrewd woman of the lower class is almost always a little bit of a cynic. "I know my company," is a reflection she is apt to make, and certainly she does not mean that she admires it ; she means that she sees through it. On the other hand, a woman who really knows the world, wherever she may be found, is never bitter. To know the world is to like the world, a little to look down on it, and occasionally to want to torment it. It is this attitude, we think, which makes knowledge of the world less attractive in women than in men. It is a gift which becomes a woman less than her brothers. It appears so very generally, though not of course always, with certain faults. If a woman is as worldly wise as a serpent, she may still be a woman of the highest principle, but harmless in the dove-like sense she is not. She goes armed, and has seldom that hesitation about inflicting pain which characterizes adorable women. In the case of great ladies this fact is too notorious to need mention, but we believe it to be true of the complete woman of the world in every class. She has a sense of superiority and she is apt to make it felt. She will impress it with a light caress or a slight wound, as occasion may require. Much is forgiven her because she bores no one. Who is so entertaining as a highly born woman of the world—unless it be a humble one ? The first will

show you her world as in a perfectly composed picture ; the second will show you the world at large as in a mirror.

It is a matter of common observation that a great many able men marry fools. The phenomenon is quite as common in one class as another. The poor woman of the world has seldom a hard- working, on-getting husband. Such a man is not attracted by her. Only too often she has to make the best of a ne'er-do-weel, or an excellent incompetent, or a plodding drudge. The vulgar explana- tion of the fact that able men so often marry fools is that they dislike a mental rival ; they want a worshipper. We believe this to be utterly untrue. They do not make this great mistake because they lack ideality, but because they have too much. They seek not worship but an object for worship, and the few women who deserve worship have not got a great deal of werldly common-sense, and have not got that adaptability and power of observation, that absence of illusions and social presence of mind, which distinguish a woman of the world. Fools, of course, have not got it either, and saints and fools are very easily confused when they are young and pretty. Probably it is a wise provision of Nature that the worldly wise so seldom mate. If both parents were thus gifted, enthusiasm in the children could hardly exist.

The worst of knowledge of the world is that it is so completely satisfying. It is alarming to what a degree it satisfies the unedu- cated. Men and women with a knowledge of the world are not those who bring about improvements in it. Consciously or uncon- soiously, they all believe that human nature is utterly immutable, and they are so intensely interested in the drama of life that they care for nothing outside it. They are never what the Apostle called "strangers and sojourners." They cannot know that "things which are not" may "bring to nought things that are." We doubt whether any very great man ever was a complete man of the world. Knowledge of the world is a second-rate gift, but a world of great men, like a world of saints, would not be a " livable " place. A world of sojourners would be desperately unsettling. It is perhaps well that there are so many who are able in this transitory life to "make themselves at home."