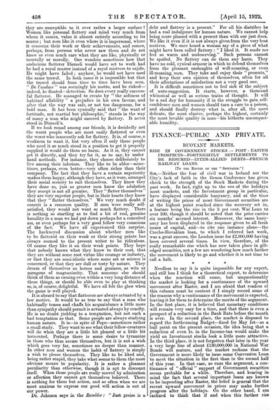 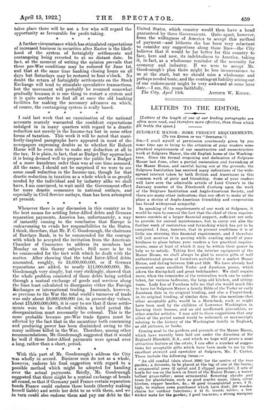 SIR,—Neither the fear of civil war in Ireland nor the City's lack of faith in the Genoa Conference has given check to the strength of the Stock Markets during the past week. In fact, right up to the eve of the holidays most markets, and the Investment group in particular, have displayed considerable buoyancy, and at the time of writing the prices of most Government securities are at the highest point reached since the recovery set in, a feature being the rise in the 5 per cent. War Loan to over 100, though it should be noted that the price carries six months' accrued interest. Moreover, the same buoy- ancy has been displayed in the response given to all fresh issues of capital, and—to cite one instance alone—the Czecho-Slovakian loan, to which I referred last week, was a great success, the London issue for £2,800,000 having been covered several times. In view, therefore, of the really remarkable rise which has now taken place in gilt- edged securities, not a few are wondering how much farther the movement is likely to go and whether it is not time to call a halt.

Needless to say it is quite impossible for any expert, and still less I think for a theoretical expert, to determine when the reaction will come, but unquestionably the market is looking for a continuance of the upward movement after Easter, and I am afraid that readers of this column must be content if I simply record some of the reasons why a continuance of the movement is expected, leaving it for them to determine the merits of the argument. In the first place, it is believed that monetary conditions will remain very easy for a time, and that there is even a prospect of a reduction in the Bank Rate before the month is over. In the second place, the market is disposed to regard the forthcoming Budget—fixed for May lst—as a bull point on the present occasion, the idea being that a reduction of even Is. in the Income-tax would make the yield on Investment stocks look a little more attractive. In the third place, it is not forgotten that later in the year a very large line of about £130,000,000 in National War Bonds will mature, and the market reckons that the Government is more likely to issue some Conversion Loan. to meet the situation in the first than in the second half of this year. In that case, so runs the argument, a con- tinuance of " official " support of Government securities seems probable for a while. Therefore, and bearing in mind the fact that several important loans are known to be impending after Easter, the belief is general that the recent upward movement in prices may make further progress after the holidays. On the other hand, I sin inclined to think that if and when this further rise takes place there will be not a few who will regard the opportunity as favourable for profit-taking. * A further circumstance which has stimulated expectations of increased business in securities after Easter is the lilreli- hood of the system of fortnightly settlements and contangoing being reverted to at no distant date. In fact, at the moment of writing the opinion prevails that these pre-War conditions may be restored by June 1st, and that at the same time banking closing hours on all days but Saturdays may be restored to four o'clock. No doubt the return of fortnightly settlements on the Stock Exchange will tend to stimulate speculative transactions, but the movement will probably be resumed somewhat gradually because it is one thing to restart a system and it is quite another to find all at once the old banking facilities for making the necessary advances on which, of course, the contangoing system is really based. * * * I said last week that an examination of the national accounts scarcely warranted the confident expectations indulged in in many quarters with regard to a drastic reduction not merely in the Income-tax but in some other forma of taxation. This week it will be noted that mani- festly-inspired paragraphs have appeared in most of the newspapers expressing doubts as to whether Sir Robert Horne will be even able to make any deduction at all in the tax. It is plain, in fact, that as Budget Day approaches it is being deemed well to prepare the public for a Budget of a more humdrum order than was at one time assumed. All the same, I should not be surprised if we were to see some snail reduction in the Income-tax, though for that drastic reduction in taxation as a whole which is so greatly needed by the individual and by industry alike we shall have, I am convinced, to wait until the Government effect far more drastic economies in national outlays, and especially in Civil Service outlays, than has been attempted at present. * * * * Whenever there is any discussion in this country as to the best means for settling Inter-Allied debts and German reparation payments, America has, unfortunately, a way of instantly coming to the conclusion that Europe is endeavouring to evade her responsibilities to the States. I think, therefore, that Mr. F. C. Goodenough, the chairman of Barclays Bank, is to be commended for the courage with which he accepted the invitation from the American Chamber of Commerce to address its members last Monday on this thorny subject. Still more is he to be commended for the tact with which he dealt with the matter. After showing that the total Inter-Allied debts amounted, roughly, to £4,000,000,000, or if German reparations are added, to nearly £11,000,000,000, Mr. Goodenough very simply, but very strikingly, showed that the whole problem consisted of those debts being settled through a mutual exchange of goods and services along the lines least calculated to disorganize either the Foreign Exchanges or international trading. Inasmuch, however, as previous to the War the total world's turnover of trade was only about £8,000,000,000 (or, in present-day values, about £15,000,000,000), it is easy to see that if these settle- ments were to be effected within a brief period the disorganization must necessarily be colossal. This is the more probable because pre-War trade figures must be affected by the fact that in the meantime both consuming and producing power has been diminished owing to the many millions killed in the War. Therefore, among other recommendations, Mr. Goodenough suggested that it would be 'well if these Inter-Allied payments were spread over a long, rather than a short, period.

* * * With this part of Mr. Goodenough's address the City 'was wholly in accord. Business men do not as a whole, however, endorse his final suggestion with regard to a possible method which might be adopted for handing over the actual payments. Briefly, Mr. Goodenough suggested that there might be a mutual exchange of bonds all round, so that if Germany paid France certain reparation bonds France could endorse those bonds (thereby making herself liable) and settle her debt to us with them, and we in turn could also endorse them and pay our debt to the United States, which country would then have a bond guaranteed by three Governments. Quite apart, however, from the willingness of America to accept this method of payment—and hitherto she has been very reluctant to consider any suggestions along those lines—the City believes that it would be far better for this country to face, here and now, its indebtedness to America, taking it, in fact, as a wholesome reminder of the necessity for economy and industry. If we were to accept Mr. Goodenough's plan there might be less inconvenience to us at the start, but we should miss a wholesome and perhaps needed tonic, and the contingent liability arising out of our endorsement might be very awkward at some later date.—I am, Sir, yours faithfully, The City, April 11th. ARTHUR W. KIDDY.