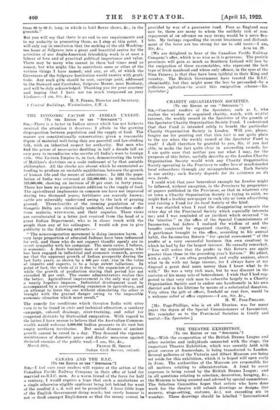 [To THE EDITOR or THE " SPECTATOR."] SIR,—I feel sure your readers will rejoice at the action of the Canadian Pacific Railway Company in their offer of land for married ex-R.I.C. men. As a warm friend of the force for half a century, I would express a hope that such a misfortune as a single otherwise eligible applicant being left behind for want of the needful s. d. will not be permitted. I have little hope of the English Government doing much; but surely honour is not so dead amongst Englishmen as that the money cannot be

provided by way of a guarantee fund. Poor as England may now be, there are many to whom the unlikely risk of non- repayment of an advance on easy terms would be a mere flea- bite. My feelings regarding the recent 'treatment and disband- ment of the force are too strong for me to add more.—I am, [We are delighted to hear of the Canadian Pacific Railway Company's offer, which is as wise as it is generous. The prairie provinces will gain as much as Southern Ireland will lose by the emigration of these ex-constables, who represent the best type of Irish manhood and whose only offence, in the eyes of the Sinn Feiners, is that they have been faithful to their King and country. The British Government have treated the R.I.C. abominably, but they might none the less be persuaded—by a judicious agitation—to assist this emigration scheme.—ED. Spectator.]