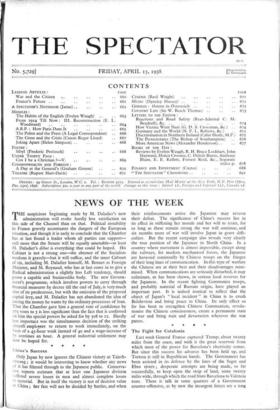 China's Success Only Japan by now ignores the Chinese victory

at Taierh- chwang ; it would be interesting to know whether any news of it has filtered through to the Japanese public. Conserva- tive reports estimate that at least one Japanese division suffered severe losses" in men and almost complete losses in material. But in itself the victory is not of decisive value (0 China ; her fate will not be decided by battles, and when their reinforcements arrive the Japanese may reverse their defeat. The significance of China's success lies in its effect in stiffening her morale and her will to resist, for so long as these remain strong the war will continue, and six months more of war will involve Japan in grave diffi- culties. But the recent campaign also reveals very clearly the true position of the Japanese in North China. In a country where movement is almost impossible, except along the railways, for modern mechanised forces, the Japanese are harassed continually by Chinese troops on the fringes of their long lines of communication. In this type of warfare the Chinese are at their best and their disadvantages mini- mised. When communications are seriously disturbed, it may culminate, as has been shown, in serious local reverses for the Japanese. In the recent fighting Communist troops, and probably material of Russian origin, have played an important part. It is indeed ironical to reflect that the object of Japan's " local incident " in China is to crush Bolshevism and bring peace to China. Its only effect so far has been to strengthen Chinese Communism, revolu- tionise the Chinese consciousness, create a permanent state of war and bring ruin and devastation wherever the war passes.