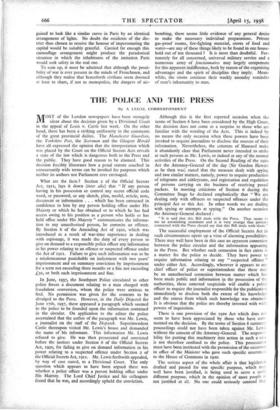 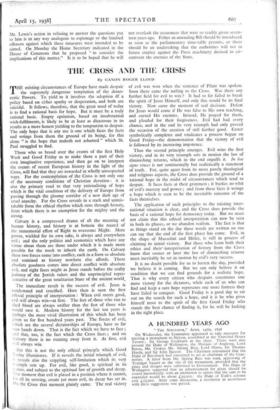 THE POLICE AND THE PRESS

By A LEGAL CORRESPONDENT

MOST of the London newspapers have been strangely silent about the decision given by a Divisional Court in the appeal of Lewis v. Cattle last week. On the other hand, there has been a striking uniformity in the comments of the great provincial dailies. The Manchester Guardian, the Yorkshire Post, the Scotsman and the Glasgow Herald have all expressed the opinion that the interpretation which was placed by the Court on the Official Secrets Acts reveals a state of the law which is dangerous both to the Press and the public. They have good reason to be alarmed. This decision forcibly illustrates how a penal statute couched in unnecessarily wide terms can be invoked for purposes which neither its authors nor Parliament ever envisaged.

What are the facts ? Section 2 of the Official Secrets Act, 1911, lays it down (inter alia) that " If any person having in his possession or control any secret official code word, or password, or any sketch, plan, model, article, note, document or information . . . which has been entrusted in confidence to him by any person holding office under His Majesty or which he has obtained or to which he has had access owing to his position as a person who holds or has held office under His Majesty " communicates the informa- tion to any unauthorised person, he commits an offence. By Section 6 of the Amending Act of 1920, which was introduced as a result of war-time experience in dealing with espionage, it was made the duty of every person to give on demand to a responsible police officer any information in his power relating to an offence or suspected offence under the Act of 191 1. Failure to give such information was to be a misdemeanour punishable on indictment with two years' imprisonment and on summary conviction by imprisonment for a term not exceeding three months or a fine not exceeding £50, or both such imprisonment and fine.

In June, 1937, the Southport Police circulated to other police forces a document relating to a man charged with fraudulent conversion, whom the police were anxious to find. No permission was given for the contents to be divulged to the Press. However, in the Daily Dispatch for June 17th, 1937, there appeared a paragraph which seemed to the police to be founded upon the information contained in the circular. On application to the editor the police ascertained that the author of the paragraph was Mr. Lewis, a journalist on the staff of the Dispatch. Superintendent Cattle thereupon visited Mr. Lewis's house and demanded the name of his informant. This information Mr. Lewis refused to give. He was then prosecuted and convicted before the justices under Section 6 of the Official Secrets Act, 192o, for Failing to give on demand information in his power relating to a suspected offence under Section 2 of the Official Secrets Act, 1911. Mr. Lewis forthwith appealed, by way of case stated, to a Divisional Court. The only question which appears to have been argued there was whether a police officer was a person holding office under His Majesty. The Lord Chief Justice and his colleagues found that he was, and accordingly upheld the conviction. Although this is the first reported occasion when the terms of Section 6 have been considered by the High Court, the decision does not come as a surprise to those who are familiar with the wording of the Acts. This is indeed by no means the only occasion when these powers have been invoked to require journalists to disclose the sources of their information. Nevertheless, the columns of Hansard make it abundantly clear that Parliament never intended to strike at such persons as Mr. Lewis, or indeed at any of the normal activities of the Press. On the Second Reading of the 1920 Act the Attorney-General of the day (Sir Gordon Hewart as he then was) stated that the measure dealt with spying and two similar matters, namely, power to require production of telegrams and cablegrams, and registration and regulation of persons carrying on the business of receiving postal packets. In meeting criticisms of Section 6 during the Committee Stage he declared emphatically that " We are dealing only with offences or suspected offences under the principal Act or this Act. In other words we are dealing with spying or attempts at spying." On another occasion the Attorney-General declared : " It is said that this Bill deals with the Press. That seems to

me an astonishing statement and it is very strange that persons connected with the Press should say that this Bill deals with them."

The successful employment of the Official Secrets Act in such circumstances opens up a vista of alarming possibilities. There may well have been in this case an apparent connexion between the police circular and the information appearing in the Press. But whether such connexion in fact exists is a matter for the police to decide. They have power to require information relating to any " suspected offence " under either Act. Accordingly, wherever it appears to any chief officer of police or superintendent that there may be an unauthorised connexion between matter which has been made public and information in the possession of the authorities, these untested suspiciotts will enable a police officer to require the journalist responsible for the publication immediately to disclose both the extent of his knowledge and the source from which such knowledge was obtained. It is obvious that the police are thereby invested with wide powers of inquisition.

There is one provision of the 192o Act which does not seem to have been appreciated by those who have com- mented on the decision. By the terms of Section 8 summary proceedings could not have been taken against Mr. Lewis without the consent of the Attorney-General. The responsi- bility for putting this machinery into action in such a case is not therefore confined to the police. This prosecution must have been instituted with the permission of the successor in office of the Minister who gave such specific assurances to the House of Commons in 192o.

The serious aspect of the whole affair is that legislation drafted and passed for one specific purpose, which may well have been justified, is being used to serve a quite different purpose, which in the opinion of most people is not justified at all. No one could seriously contend that Mr. Lewis's action in refusing to answer the questions put to him is in any way analogous to espionage or the kindred offences against which these measures were intended to be aimed. On Monday the Home Secretary indicated in the House of Commons that he proposed " to consider the implications of this matter." It is to be hoped that he will not overlook the assurances that were so readily given seven- teen years ago. Either an amending Bill should be introduced as soon as the parliamentary time-table permits, or there should be an undertaking that the authorities will not in future employ against the Press machinery devised to cir- cumvent the enemies of the State.