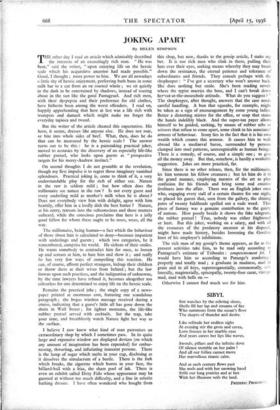 THE other day I read an article which admirably described the interests of an exceedingly rich man. " He was bent," said the writer, " upon enjoying life on the heroic Scale which his acquisitive ancestor had made possible." Good, I thought ; more power to him. We are all nowadays a little shy of heroic enjoyment, preferring bath buns in some milk bar to a cut from an ox roasted whole ; we sit quietly in the dark to be entertained by shadows, instead of roaring about in the sun like the good Pantagruel. And rich men, with their dyspepsia and their preference for old clothes, have hitherto been among the worst offenders. I read on, happily apprehending that here at last was a life rich with trumpets and damask which might make me forget the everyday tapioca and tweed.

But the writer of the article cheated this expectation. His hero, it seems, dresses like anyone else. He does not roar, or bite into whole sides of beef. What, then, does he do that can be measured by the heroic scale ? The answer turns out to be this : he is a painstaking practical joker, moved to ecstasies by the discovery of an especially life-like rubber pretzel, who looks upon guests as " prospective targets for his merry-Andrew instinct."

On second thoughts I do not grumble at the revelation, though my first impulse is to regret those imaginary vanished splendours. Practical joking is, come to think of it, a very understandable ploy for the rich of either sex. Nature in the raw is seldom mild ; but how often does the millionaire see nature in the raw ? Is not every guest and every underling mild as mother's milk when he is about ? Does not everybody view him with delight, agree with him heartily, offer him in a lordly dish the best butter ? Nature, at his entry, retreats into the subconscious and there mutters unheard, while the conscious proclaims that here is a jolly good fellow for whom there ought to be roses, roses, all the way.

The millionaire, being human—a fact which the behaviour of those about him is calculated to deny—becomes impatient with underlings and guests ; which two categories, be it remembered, comprise his world. He sickens of their smiles. He wants somebody to contradict him for once, to loosen up and scream at him, to hate him and show it ; and really he has very few ways of compelling this reaction. He can, of course, affront perfect strangers, kidnap their children or throw darts at their wives from behind ; but the law frowns upon such practices, and the indignation of unknowns, by the time lawyers have refined it, becomes altogether too colourless for one determined to enjoy life on the heroic scale.

Remains the practical joke ; the single copy of a news- paper printed at enormous cost, featuring one scandalous paragraph ; the bogus wireless message received during a cruise, indicating that a guest's little all has gone down the drain in Wall Street ; for lighter moments, the life-like rubber pretzel served with cocktails. Set the trap, take your time, and breathlessly watch Nature fight her way to the surface.

I believe I now know what kind of man patronises an extraordinary shop by which I sometimes pass. In its quite large and expensive window are displayed devices (on which any amount of imagination has been expended) for embar- rassing, thwarting, and infuriating innocent persons. There is the lump of sugar which melts in your cup, disclosing as it dissolves the simulacrum of a beetle. There is the fork which breaks, the cigarette which bursts in your face, the billiard-ball with a bias, the sham pool of ink. There is even an exhibit called Dirty Fido whose appearance may be guessed at without too much difficulty, and a line in soluble bathing dresses. I have often wondered who bought from this shop, but now, thanks to the gossip article, I make my bet. It is our rich men who slink in there, pulling their hats over their eyes, seeking means whereby they may break down the resistance, the eternal patience and tolerance of subordinates and friends. They consult perhaps with the shopkeeper : " I've got a secretary who won't answer back. She does nothing but smile. She's been reading novels where the typist marries the boss, and I can't break down her•cat-at-the-mousehole attitude. What do you suggest ? " The shopkeeper, after thought, answers that the case needs careful handling. A bun that squeaks, for example, might be taken as a sign of encouragement by some young ladies. Better a distorting mirror for the office, or soap that stains the hands indelibly black. And the super-tax payer allows himself to be guided, seeking, by means of rubber nibs or scissors that refuse to come apart, some chink in his associates' armour of behaviour. Irony lies in the fact that it is his own wealth which creates this armour. It causes him to walk abroad like a mediaeval baron, surrounded by persons clamped into steel patterns, unrecognisable as human beings. There is a remedy, of course, and a simple one ; to give all the money away. But that, somehow, is hardly a workable suggestion. Jokes are more practical, far.

Since there is no other release, then, for the millionaire, let him torment his fellow creatures ; but let him do it in the grand manner, employing masters of the art to plan confusion for his friends and bring some real creative liveliness into the affair. There was an English joker once who, engaging every stall of a certain theatre for one night, so placed his guests that, seen from the gallery, the shining pates of twenty baldheads spelled out a rude word. That piece of fantasy was a genuine contribution to the gaiety of nations. How poorly beside it shows the fake telegram, the rubber pretzel ! True, nobody was either frightened or hurt. But this joker, working on a salary, and with all the resources of the predatory ancestor at his disposal, might have made history, besides loosening the Gordian knot of his employer's inhibitions.

The rich man of my gossip's theme appears, as far as his present activities take him, to be mad only according to Pantagruel's estimate of Triboulet : competentattent fol. would have him so according to Panurge's rendering : properly and totally mad ; a graduate in madness, mad in grain and in all keys, supererogatorially, commensally, col- laterally, magisterially, episcopally, twenty-four carat, vintage mad, mad with bells on - Otherwise I cannot find much use for him.