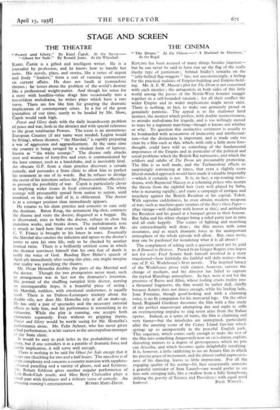 KIPLING has been accused of many things besides jingoism— but he can never be said to have run up the flag of the really slushy type of patriotism ; behind Stalky's remarks on the " jelly-bellied flag-waggers " lies, not unconvincingly, a feeling for the practical realities of Empire-building and Empire-hold- ing. Mr. A. E. W. Mason's plot for The Drum is not concerned with such niceties ; the antagonists in both sides of this little world among the passes of the North-West frontier snuggle together in a self-bounded vacuum ; for all their conflict the wider Empire and its wider implications might never exist. There is nothing, in fact, to make one genuinely proud or genuinely patriotic. The appeal is to the shallower herd instinct, the instinct which prefers, with double instinctiveness, to mistake melodrama for tragedy, and is too willingly moved to tears by a regiment marching—though it knows not whither or why. To question this instinctive sentiment is usually to be bombarded with accusations of insincerity and intellectual- ism—but the distinction is important, and is made only too clear by a film such as this, which, with only a little more fore- thought, could have told us something of the fundamental importance of the Empire and in particular of the political and social problems which the British Raj represents, and which the soldiers and sahibs of The Drum are presumably protecting. The film is so well made, and the Technicolour effects so surprisingly convincing at times, that even a slightly more liberal-minded approach would have made it valuable Imperially —which it certainly is not. It is, in fact, a rip-roaring melo- drama, with Raymond Massey as a scheming prince who usurps the throne from the rightful heir (very well played by Sabu, who is maturing rapidly), and starts a campaign of intrigue and treachery against the British Resident at his capital, Tokot. With supreme caddishness, he even obtains modern weapons of war, such as machine-guns (readers of the Boy's Own Paper- 1890 vintage—will shudder with horror at this), and ambushes the Resident and his guard at a banquet given in their honour. But Sabu and his white charger bring a relief party just in time and all ends happily. The scenes of fighting and marching are extraordinarily well done ; the film moves with some assurance, and as much dramatic force as the unimportant atmosphere of the whole episode will allow. But, once more, may one be pardoned for wondering what it is all about ?

The compliment of asking such a question need not be paid to A Damsel in Distress. Parted from Ginger Rogers (one hopes not for ever) Fred Astaire finds himself involved in a story transferred—how faithfully the faithful will duly notice—from one of P. G. Wodehouse's finer novels. The inspired lunacy of the Wodehouse prose style cannot, however, survive the change of medium, and the director has failed to capture the typical Blandings atmosphere. In fact, were it not for the presence of Burns and Allen, whose fooling cracks reality into a thousand fragments, the film would be rather dull, chiefly because Astaire does not dance enough, while his leading lady, Joan Fontaine, though good-looking and with a charming voice, is no fit companion for his mercurial legs. On the other hand, Reginald Gardiner decorates the film with a fine study of the perfect manservant attempting day and night to stifle an overmastering impulse to sing tenor arias from the Italian operas. Indeed, as a series of turns, the film is charming and very funny—but the interludes are uninspired, particularly after the amazing scene of the Coney Island fun-fair which springs up so unexpectedly in the peaceful English park. This sequence, which comes early enough to make the rest of the film into something dangerously near an En'l-climax, exploits distorting mirrors to a degree of grotesqueness which no pen can describe, and which becomes quite delightfully terrifying. It is, however, a little saddening to see an Astaire film in which his precise grace of movement, and the almost verbal expressive- ness of his dancing, leaves so little impression. For all the engaging quality of his acting—his face occasionally unmasks a grateful reminder of Stan Laurel—one would prefer to see him with swinging tails, like a swallow from a Silly Symphony, defying the gravity of Science and Providence with equal good