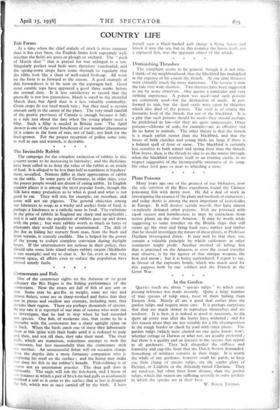 The complaint seems to be general, though it is not true, I think, of my neighbourhood, that the blackbird has multiplied at the expense of his cousin the thrush. At one time thrushes were certainly much the more numerous. The reverse is now the rule over wide districts. Two theories have been suggested to me by acute observers. One quotes a particular and very striking experience. A poison was used—and such poisons are commonly used—for the destruction of snails. It per- formed its task, but the dead snails were eaten by thrushes which also died of the poison. The snail is of course the favourite food of the thrush, but not of the blackbird. It is a pity that such poisons should be used—they should perhaps be prohibited in law—for they are quite unnecessary. Other poisons—chlorate of soda, for example—are as effective and do no harm to animals. The other theory is that the thrush is a much earlier nester than the blackbird, and that the losses of both clutches and young birds are large if there is a belated spell of frost or snow. The blackbird is certainly less sensitive to both winter and spring frost than the thrush. How brave, then, is the thrush to sing to us the winter through, when the blackbird restricts itself to an evening cackle, in no respect suggestive of the incomparable sweetness of its song. No other bird goes so near to whistling a tune.