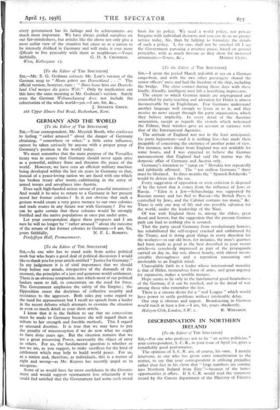 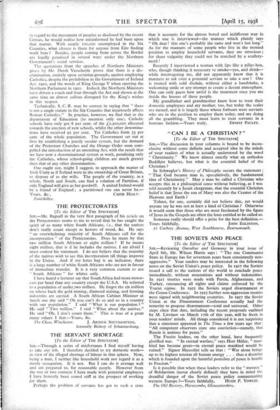 [To the Editor of THE SPECTATOR] SIR,—For one who professes not to be " an active politician," your correspondent, S. C. R., in your issue of April 1st, gives a remarkably good performance.

The opinions of S. C. R. arc, of course, his own. I merely intervene, as one who has given some consideration to the matter, to say that your correspondent is utilising prejudice rather than fact in his claim that " large numbers are coming into Northern Ireland from Eire "—because of the better opportunities it offers. If S. C. R. would read the statement issued by the Census department of the Ministry of Finance in regard to the movement of peoples as disclosed by the recent Census, he would realise how misinformed he had been upon that matter. With nearly ioo,000 unemployed in the Six Counties, what chance is there for anyone from Eire finding work here ? Besides, people coming from across the Border are legally penalised in several ways under the Northern Government's social services.

The quotations from the speeches of Northern Ministers given by Mr. Derek Verschoyle prove that there is a dis- crimination, entirely upon sectarian grounds, against employing Catholics, despite the prohibition in the Government of Ireland Act, 1920, and the words of King George V when opening the Northern Parliament in 1921. Indeed, the Northern Ministers have driven a coach and four through the Act and shown at the same time an almost callous disregard for the King's wishes in this respect.

Technically, S. C. R. may be correct in saying that "there is not a single statute in the Six Counties that injuriously affects Roman Catholics." In practice, however, we find that in the department of Education (to mention only one), Catholic schools have only got 8 per cent. of the £1,5oo,000 allocated towards the erection of new schools, whilst the other denomina- tions have received 92 per cent. Yet Catholics form 33 per cent. of the whole population. The Government set out at first by establishing a purely secular system, but the demand of the Protestant Churches and the Orange Order soon com- pelled the introduction of an amending Act, with the result that we have now a denominational system at work, penalising only the Catholics, whose school-going children are much greater than that of any other denomination.

One ought not, might I suggest, to approach the matter of Irish Unity as if Ireland were in the ownership of Great Britain, to dispose of as she wills. The people of the country, as a whole, North and South, can find a solution of Partition, if only England will give us her goodwill. A united Ireland would be a friend of England ; a partitioned one can never be.—