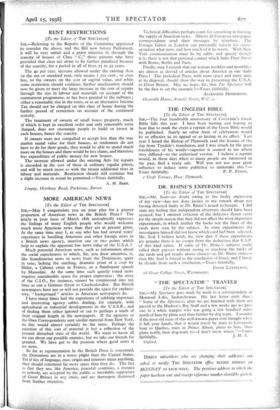 " THE SPECTATOR " TRAVELS [To the Editor of THE

SPECTATOR] SIR,—My Spectator goes week by week to a correspondent at Montreal Lake, Saskatchewan. His last letter ends thus : " Some of the Spectators after we are finished with them are passed to the Hudson's Bay Staff and a few weeks ago we gave one to a white trapper who was going a few hundred miles north of here by plane and then further by dog team. I wonder if the poor old issue of this well-known paper ever thought when it left your hands, that it would travel by train to Liverpool, boat to Quebec, train to Prince Albert, plane to here, then plane north, then dog-team to—I don't know where."—Yours