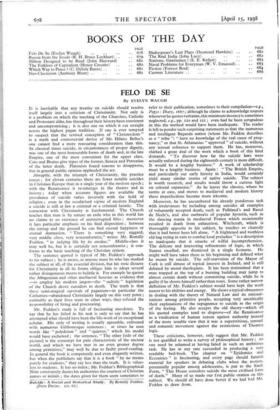 The Folklore of Capitalism (Honor Croome) ..

By EVELYN WAUGH Ir is inevitable that any treatise on suicide should resolve itself largely into a criticism of Christianity. Not only is it a problem on which the teaching of the Churches, Catholic and Protestant alike, has throughout their history been consistent and uncompromising ; it is also one on which it cut straight across the highest pagan tradition. If one is ever tempted to suspect that the revived conception of " Christendom " is a myth and controversial device of Mr. Hilaire Belloc's one cannot find a more reassuring consideration than this. In classical times suicide, in circumstances of proper dignity, was one of the most honourable forms of death and, in the late Empire, one of the most convenient for the upper class. Cato and Brutus give types of the former, Seneca and Petronius of the latter death. Platonists found reasons to disapprove, but in general public opinion applauded the act.

Abruptly, with the triumph of Christianity, the practice ceases ; for eleven centuries there are fewer notable suicides in Christian Europe than in a single year of the modern epoch ; with the Renaissance it re-emerges in the theatre and in history ; today when accurate figures are available the prevalence of suicide varies inversely with the hold of religion ; even in the secularised regime of modem England a suicide is still at law a criminal or a criminal lunatic. The connexion with Christianity is fundamental. The Church teaches that man is by nature an exile who in this world has no claims to an existence of uninterrupted bliss ; moreover it lays particular emphasis on his final disposition ; between the stirrup and the ground he can find eternal happiness or eternal damnation. " There is something very niggard, very middle class, very nonconformist," writes Mr. Romilly Fedden, " in judging life by its exodus." Middle-class it may well be, but it is certainly not nonconformist ; it con- forms to the basic teaching of the Christian system.

The sentence quoted is typical of Mr. Fedden's approach to his subject ; he is aware, as anyone must be who has studied the subject at all, of the essential division, but his stoic distaste for Christianity in all its forms obliges him to adopt several rather disingenuous means to belittle it. For example he quotes the Albigensian and other mediaeval heresies as evidence that —to employ his modern jargon—the " sadistic " legislation of the Church drove outsiders to death. The truth is that these semi-magical survivals of paganism—in particular the Catharists—abandoned Christianity largely on this very point ; estimable as their lives were in other ways, they refused the responsibility of living and procreating.

Mr. Fedden's study is full of fascinating anecdotes. To say that he has failed in his task is only to say that he has attempted what should have been the life-work of an exceptional scholar. His style of writing is usually agreeable, enlivened with numerous Gibbonesque sentences ; at times he uses words like " polydeism " and " quieten," which his model would have eschewed ; the sentence, " The other [side of the picture) is the contempt for pain characteristic of the ancient world, and which we have met in an even greater degree among primitives," may well be due to faulty proof-reading. In general the book is competently and even elegantly written, but when the publishers say that it is a book " by no means purely for students," they say less than the truth. It is value- less to students. It has no index; Mr. Fedden's Bibliographical Note consistently denies his authorities the courtesy of Christian names or initials ; the dates given for them seem sometimes to Suicide : A Social and Historical Study. By Romilly Fedden. (Peter Davies. 12s. 6d.) refer to their publication, sometimes to their compilation—e.g., Pepys : Diary, 1667; although he claims to acknowledge sources

whenever he quotes verbatim, this minimum decencyis sometimes neglected, e.g., pp. 120 and 121; even had he been scrupulous in this the method would have been inadequate. The reader is left to ponder such surprising statements as that the numerous and intelligent Baganda nation (whom Mr. Fedden describes as a " tribe ") " have no knowledge of the real cause of preg- nancy," or that St. Athanasius " approved " of suicide, without any textual reference to support them. He has, moreover, shirked a great deal of the work which a book of this kind demands. " To discover how far the suicide laws were

actually enforced during the eighteenth century is more difficult. It would be a lengthy business." A work of scholarship must be a lengthy business. Again : " The British Empire, and particularly our early history in India, would certainly yield many similar stories of native suicide. The subject is worth research, and results would throw a curious light on colonial expansion." As he leaves the classics, where he seems at ease, and moves to mediaeval and modem history these imperfections become more irksome.

Moreover, he has encumbered his already ponderous task with irrelevances by including among suicides all examples of voluntarily accepted death, such as Falkland's and Raoul de Neele's, and also outbreaks of popular hysteria, such as the dancing mania in mediaeval France which occasionally resulted in death from exhaustion. Witchcraft, which is thoroughly apposite to his subject, he touches so clumsily that it had better been left alone. " A frightened and toothless old hag trying in vain to combat local prejudice " is a description so inadequate that it smacks of wilful incomprehension. The delicate and interesting refinements of logic, in which Suarez excelled, are dismissed in a single footnote. He might well have taken these as his beginning and defined what he meant by suicide. The self-starvation of the Mayor of Cork is still almost of topical interest in Ireland, and is still debated by moral theologians. It has been maintained that a man trapped at the top of a burning building may jump to almost certain death without committing suicide, while he is guilty if he shoots himself rather than roast. Some rather narrow definition of Mr. Fedden's subject would have kept the work nearer to his abilities and energy. He shows a typical obtuseness in dealing with the theory of Natural Law and its rational- isations among primitive people, accepting very uncritically their explanations of the repugnance to suicide as the origin of the feeling. He also accepts the old theory—which all his quoted examples tend • to disprove—of the Renaissance

as a vindication of human reason against authority instead of the more tenable view that it was a superstitious, sensual and romantic movement against the restrictions of Thomist logic.

These criticisms, however, only suggest that Mr. Fedden is not qualified to write a survey of philosophical history ; no one need be ashamed at having failed in such an ambitious task. He has at any rate succeeded in producing a very readable bed-book. The chapter on " Epidemics and Eccentrics " is fascinating, and every page should furnish material for speakers in debating clubs when the motion, perennially popular among adolescents, is put to the Sixth

Form, " This House considers suicide the most civilised form of death." Many of us made our first public oration on this subject. We should -all have done better if we had had Mr. Fedden to draw from.