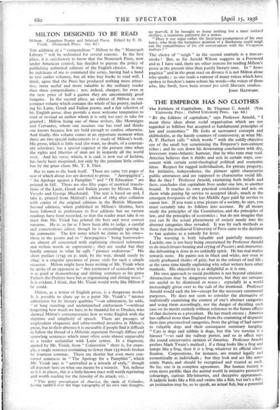 MILTON DESIGNED TO BE READ

THE addition of a " compendious " Milton to the " Nonesuch Library " will be welcomed for several reasons. In the first place, it is satisfactory to know that the Nonesuch Press, now under American control, has decided to pursue the policy of publishing unlimited editions of the English classics. It may be indelicate of me to commend the series, having had a hand in two earlier volumes, but all who buy books to read will, I think, agree that the Press has produced nothing more attrac- tive, more useful and more valuable to the ordinary reader than these compendiums ; nor, indeed, cheaper, for even at the new price of half a guinea they are uncommonly good bargains. In the second place, an edition of Milton in one compact volume which contains the whole of his poetry, includ- ing his Latin, Greek and Italian poems, and a fair selection of his English prose, does provide a most welcome temptation to read or re-read an author whom it is only too easy to take for granted ; Milton being one of those writers, like Montaigne and Cervantes, whom one assumes one has read and thinks one knows because few are bold enough to confess otherwise. And finally, this volume comes at an opportune moment when there are two special inducements to a study of Milton's work. His prose, which is little read (for want, no doubt, of a conveni- ent selection), has a special cogency at the present time when the rights and liberties of man are in jeopardy all the world over. And his verse, which, it is said, is now out of fashion, has lately been misprized, not only by the petulant little critics but by the great cham Mr. T. S. Eliot.

But to turn to the book itself. There are some 75o pages of text of which about 200 are devoted to prose. " Areopagitica", " An Apology against a Pamphlet " and " Of Education " are printed in full. There are also fifty pages of metrical transla- tions of the Latin, Greek and Italian poems by Messrs. Skeat, Vesselo and George Macdonald. The text is based on and, I take it, printed from Mitford's edition of 1863 after collation with copies of the original editions in the British Museum. Second editions, when published in Milton's lifetime, have been followed in preference to first editions but no variant readings have been recorded, so that the reader must take it on trust that Mr. Visiak has printed the best and most correct versions. He is, as far as I have been able to judge, a careful and conscientious editor, though he is exceedingly sparing in his comments. The few notes which he claims as his own— those to the poems and to " Areopagitica " being borrowed— are almost all concerned with explaining classical references and archaic words or expressions ; they are useful but they hardly amount to what he calls " pioneer endeavour." His short preface (1743 on p. xxiii, by the way, should surely be 1694) is a singular specimen of prose style for such a simple occasion. Milton might have been writing of Mr. Visiak when he spoke of an opponent as " this tormentor of semicolons who is as good at dismembring and slitting sentences as his grave Fathers the Prelates have bin at stigmatizing and slitting noses." It is evident, I think, that Mr. Visiak would write like Milton if he could.

Milton, as a writer of English prose, is a dangerous model. It is possible to share up to a point Mr. Visiak's `-` intense admiration for its literary qualities "—an admiration, he adds, " of long standing and undiminished enthusiasm "—without forgetting how much we have to be thankful for to Dryden, who showed Milton's contemporaries how to write English with the rhythms and simplicity of speech. There are passages of resplendent eloquence and sabre-toothed invective in Milton's prose, but in their absence it is excusable if people find it difficult to follow the thread of a Miltonic argument through diffuse and sprawling sentences which must often seem almost unparsable to a reader unfamiliar with Latin syntax. In a fragment, quoted by Mr. Visiak, from " Colasterion " there is, for exam- ple, a single sentence containing no fewer than 133 words broken by fourteen commas. There are shorter but even more con- torted sentences in " The Apology for a Pamphlet ", which Mr. Visiak says is " unrivalled as a miracle of .style," though all depends here on what one means by a miracle. Yet, tedious as it is in places, this is a little-known tract well worth reprinting and worth reading for the ferocity of its attack, viz.: "This petty prevaricator of America, the •zanie of Columbus, having rambl'd over the huge topography of his own vain thoughts,

no marvel, if he brought us home nothing but a meer tankard drollery, a venereous parjetory for a stewes.

" Does it not argue rather the lascivious promptnesse of his own fancy, who from the harmlesse mention of a Sleekstone could neigh out the remembrance of his old conversations with the Viraginian trollops ? "

The choice of " neigh " in the second example is a master- stroke ! But, as Sir Arnold Wilson suggests in a Foreword and as I have said, there are other reasons for reading Milton's

prose at the present time than purely literary ones. In " Arco- pagitica " and in the great tract on divorce it is not Milton alone who speaks ; as one reads a rumour of many voices which have spoken in freedom's name echoes his words—the voices of those who, like Swift, have been strenui pro virili libertatis vindices.