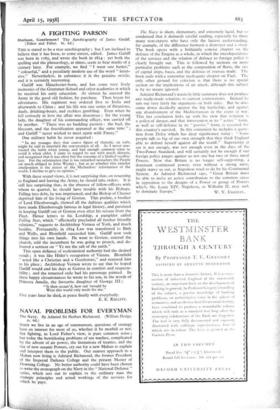 SINCE we live in- an age of rearmament, questions of strategy have an interest for most of us, whether it be morbid or not. Sea fighting, in Lord Fisher's view, is pure common sense ; but today the bewildering problems of sea warfare, complicated by the advent of air power, the limitations of treaties, and the rise of new oceanic Powers, cry out for a new Mahan to explain and interpret them to the public. Our nearest approach to a Mahan now living is Admiral Richmond, the former President of the Imperial Defence College and the present Master of Downing College. No better authority could have been chosen to write the monograph on the Navy in the " National Defence " series, which sets out to explain to the ordinary man the strategic principles and actual workings of the services for which he pays. The Navy is short, elementary, and extremely lucid, but so condensed that it demands careful reading, especially by those many non-experts who have only the haziest understanding, for example, of the difference between a destroyer and a sloop. The book opens with a brilliantly concise chapter on the defence of the Empire as a whole, in which the interdependence of the services and the relation of defence to foreign policy is clearly brought out. This is followed by sections on more particular problems such as the composition of fleets, the size of capital ships, bases, and the defence of oversea trade. The book ends with a somewhat inadequate chapter on Fuel. The only other ground for criticism is that there is no special section on the implications of air attack, although this subject is by no means ignored.

Admiral Richmond's masterly little summary does not produce any ready-made solutions to current controversies. Instead he sets out very fairly the arguments on both sides. But he does come down decidedly against the big battleship, and against any abandonment of the Mediterranean in the event of war. This last conclusion links up with his view that isolation is a policy of danger, and that intervention in its " active " form, as well as self-defence in its " passive " form, is essential for this country's survival. In this connexion he includes a quota- tion from Defoe which has deep significance today : " Some people talk so big of our own strength that they think England able to defend herself against all the world." Superiority at sea is not enough, was not enough even in the days of the Two-Power Standard, and will certainly not be enough if our foreign policy ranges against us not one but two or three naval Powers. Now that Britain is no longer self-supporting, a dominant continental power, even without a strong navy, might starve us out, as Napoleon tried to do by his Continental System. As Admiral Richmond says, " Great Britain must be able to make an active contribution to the common cause in opposition to the designs of a Power or group of Powers which, like Louis XIV, Napoleon, or Wilhelm II, may seek