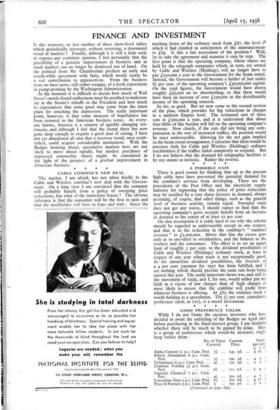 A POSSIBLE GAIN There is good reason for thinking that

up to the present high cable rates have prevented the potential demand for the combine's services from developing. There are the precedents of the Post Office and the electricity supply industry for supposing that the policy of price reductions may be justified by a very sharp increase in demand, always assuming, of course, that other things, such as the general level of business activity, remain equal. Provided trade does not get any worse, I should expect to find that the operating company's gross receipts benefit from an increase in demand to the extent of at least to per cent.

On that assumption it is really hard to see why the scheme should be regarded as unfavourable except in one respect, and that is in the reduction in the combine's " standard revenue " to £1,200,000. Above that line the excess goes only as to one-third to stockholders, and the balance to the workers and the consumers. The effect is to set an upper limit of roughly 5 per cent. to the dividend possibilities of Cable and Wireless (Holdings) ordinary stock, at least in respect of any year when trade is not exceptionally good. As for immediate dividend' possibilities, the forecast of a 4 per cent. payment for 1937 has been fulfilled, and I see nothing which should prevent the same rate from being earned this year. The really important factor was, and still is, the movement of trade, and I, for one, would rather pin my faith in a regime of low charges than of high charges as most likely to ensure that the combine will profit from whatever business is offering. At £63 the ordinary stock is worth holding as a speculation. The 5 per cent. cumulative preference stock, at lora, is a sound investment. * * * *