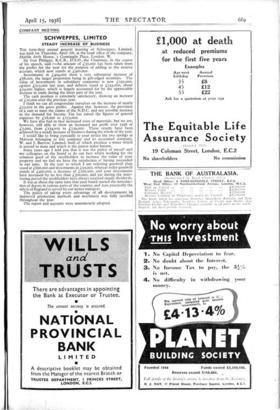 Investments at £404,000 show a very substantial increase of £68,000, the larger proportion being in gilt-edged securities. The value of investments in subsidiary companies is now £195,000, aglinst £215,000 last year, and debtors stand at £243,000, about £24,000 higher, which is largely accounted for by the appreciable increase in trade during the latter part of the year.

The cash position is extremely satisfactory, showing an increase of £ao,000 over the previous year.

I think we can all congratulate ourselves on the increase of nearly £23,000 in the gross profits. Against this, however, the provision of a sum to meet the claims of the N.D.C. and any possible increase in the demand for Income Tax has raised the figures of general expenses by £18,000 to £153,000.

We have also had to face increased costs of materials, but we are, however, still able to show an increased net profit over 1936 of £5,000, from £134,000 to £139,000. These results have been achieved by a steady increase of business during the whole of the year.

I would like to bring especially to your notice the two springs at Malvern belonging to this company and its associated company, W. and J. Burrow, Limited, both of which produce a water which is second to none and which is the purest water known.

Some years ago I told you that it was the policy of myself and my colleagues on the board to do our best whilst working for the common good of the stockholders to increase the value of your property and we feel we have the satisfaction of having succeeded in our aims. In the year to which I am referring goodwill then stood at £600,000 and investments at £93,000, whereas today goodwill stands at £400,00o, a decrease of £200,000, and your investments have increased by no less than £300,000, and yet during the inter- vening period the stockholders have always received steady dividerds. It was at about the same time that your board started the introduc- tion of depots in various parts of the country, and now practically the whole of England is served by our motor transport.

The policy of taking every advantage of all developments in improved production methods and machinery was fully justified throughout the year.