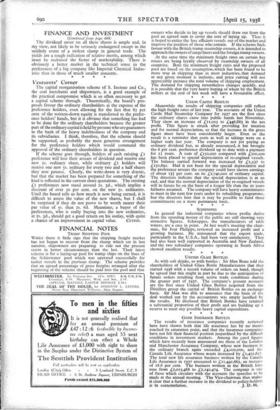 The capital reorganisation scheme of S. Instone and Co., the coal merchants and shipowners, is a good example of the practical compromise which is so often necessary to get a capital scheme through. Theoretically, the board's pro- posals favour the ordinary shareholders at the expense of the preference holders, even allowing for the fact that 85 per cent. of the written-down equity is transferred to the prefer- ence holders' hands, but it is obvious that something has had to be done for the ordinary shareholders because the greater part of the ordinary capital is held by persons who are guarantors to the bank of the heavy indebtedness of the company. and its subsidiaries. I think, therefore, that the scheme should be supported, as probably the most generous arrangement for the preference holders which would command the approval of the ordinary shareholders in question.

If the scheme goes through, holders of each existing Li preference will lose their arrears of dividend and receive one new 5s. ordinary share, while ordinary El holders will receive one new 5s. ordinary for every two and a half shares they now possess. Clearly, the write-down is very drastic, but that the market has been prepared for something of the kind is reflected in the current share quotations. The existing £i preferences now stand around 2s. 3d., which implies a discount of over 5o per cent. on the new 5s. ordinaries. Until the board tells us how much is now being earned, it is difficult to assess the value of the new shares, but I shall be surprised if they do not prove to be worth nearer their par value of 5s. than 2S. 6d. Meantime, a buyer of the preferences, who is really buying into the new ordinaries, at 25. 3d., should get a good return on his outlay, with quite a chance of an improvement in capital value. Cusros.