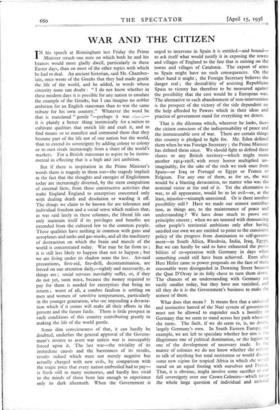 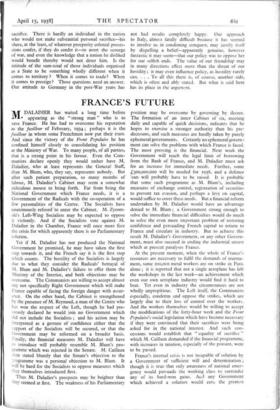 WAR AND THE CITIZEN

IN his speech at Birmingham last Friday the Prime Minister struck one note on which both he and his hearers would more gladly dwell, particularly in these Easter days, than on most of the other topics with which he had to deal. An ancient historian, said Mr. Chamber- lain, once wrote of the Greeks that they had made gentle the life of the world, and he added, in words whose sincerity none can doubt : " I do not know whether in these modem days it is possible for any nation to emulate the example of the Greeks, but I can imagine no nobler ambition for an English statesman than to win the same tribute for his own country." Whatever the word be that is translated " gentle "—perhaps it was el'ItEr4s- it is plainly a better thing intrinsically for a nation to cultivate qualities that enrich life and exalt it, and to find means so to manifest and commend them that they become part of the life not of one nation but the world, than to extend its sovereignty by adding colony to colony or to oust rivals increasingly from a share of the world's markets. For a British statesman to aspire to be instru- mental in effecting that is a high and just ambition.

But if there is inspiration in the Prime Minister's words there is tragedy in them too—the tragedy implicit in the fact that the thoughts and energies of Englishmen today are increasingly diverted, by the stern compulsion of external facts, from those constructive activities that make England England to enterprises concerned only with dealing death and desolation or warding it off. The things we claim to be known for are tolerance and individual freedom and a social sense which realises that, as was said lately in these columns, the liberal life can only maintain itself if its privileges and benefits are extended from the cultured few to the common people. Those qualities have nothing in common with guns and aeroplanes and tanks and gas-masks, and all the machinery of destruction on which the brain and muscle of the world is concentrated today. War may be far from us ; it is still less likely to happen than not to happen ; but we are living under its shadow none the less. Air-raid precautions, first-aid, fire-drill, decontamination, are forced on our attention daily,—rightly and necessarily, as things are ; social services inevitably suffer, or, if they do not yet, soon must, because the money required to pay for them is needed for enterprises that bring no return ; worst of all, a sombre fatalism is settling on men and women of sensitive temperament, particularly in the younger generation, who see impending a devasta- tion which if it comes will make all their efforts in the present and the future futile. There is little prospect in such conditions of this country contributing greatly to making the life of the world gentle.

Some dim consciousness of that, it can hardly be doubted, underlies the general approval of the Govern- ment's resolve to avert war unless war is inescapably forced upon it. The last war—the triviality of its immediate causes and the barrenness of its results, results indeed which were not merely negative but actually charged with new evils, by comparison with the tragic price that every nation embroiled had to pay— is fresh still in many memories, and hardly less vivid to the minds of those born late enough to experience only its dark aftermath. When the Government is urged to intervene in Spain it is entitled—and bound— to ask itself what would justify it in exposing the towns and villages of England to the fate that is raining on the towns and villages of Catalonia. The export of arms to Spain might have no such consequences. On the other hand it might ; the Foreign Secretary believes the danger real ; the desirability of assisting Republican Spain to victory has therefore to be measured against the possibility that the cost would be a European war. The alternative to such abandonment of non-intervention is the prospect of the victory of the side dependent on the help afforded by Powers which in their ideas and practice of government stand for everything we detest.

That is the dilemma which, wherever he looks, faces the citizen conscious of the indispensability of peace and the immeasurable cost of war. There are certain things this country is pledged to fight for. Mr. Eden defined them when he was Foreign Secretary ; the Prime Minister has defined them since. We should fight to defend these shores or any British territory—which might mean another 1914-1918, with every horror multiplied un- imaginably, for the sake of the rock we took once from Spain—or Iraq or Portugal or Egypt or France or Belgium. For any one of them; as for us, the war would be a blasting devastation, no matter who was the nominal victor at the end of it. Yet the alternative to war, to all appearance, would be to let evil—or, at the least, injustice—triumph unresisted. Or is there another possibility still ? Have we made our utmost contribu- tion, as things are, to the maintenance of peace and understanding ? We have done much to prove our principles sincere ; when we are taunted with denouncing other people's territorial ambitions only after having satisfied our own we are entitled to point to the consistent policy of the progress from domination to self-govern- ment—in South Africa, Rhodesia, India, Iraq, Egypt. But we can hardly be said to have exhausted the possi- bilities of co-operation with Germany in days when something could still have been achieved. Even after Herr Hitler came to power proposals on the face of them reasonable were disregarded in Downing Street because the Quai D'Orsay in its folly chose to turn them down. The chances of an understanding with Germany are vastly smaller today, but they have not vanished, and till they do it is the Government's business to make the utmost of them.

What does that mean ? It means first that a universal and instinctive hatred of the Nazi system of government must not be allowed to engender such a hostility to Germany that we seem to stand across her path wherever she turns. The fault, if we do seem to, is, no doubt, largely Germany's own. In South Eastern Europe, for example, we are left to speculate whether her aim is the illegitimate one of political domination, or the legitimate one of the development of necessary trade. In the matter of colonies we do not know whether she rethses to talk of anything but total restitution or would discuss some new regime for tropical Africa in which she would stand on an equal footing with ourselves and France. That, it is obvious, might involve some sacrifice of our full sovereignty over our Crown Colonies—which raises the whole large question of individual and national sacrifice. There is hardly an individual in the nation who would not make substantial personal sacrifice—his share, at the least, of whatever prosperity colonial posses- sions confer, if they do confer it—to avert the scourge of war, and even the knowledge that a nation he disliked would benefit thereby would not deter him. Is the attitude of the sum-total of those individuals organised as a State to be something wholly different when it comes to territory ? When it comes to trade ? When it comes to prestige? Those questions need an answer. Our attitude to Germany in the post-War years has not had results completely happy. Our approach to Italy, almost fatally difficult because it has seemed to involve us in condoning conquest, may justify itself by dispelling a belief—apparently genuine, however fantastic it may seem—that our policy was to oppose her for our selfish ends. The value of our friendship may in many directions effect more than the threat of our hostility; it may even influence policy, as hostility rarely can. . . . To all this there is, of course, another side, which is often and ably stated. But what is said here has its place in the argum°nt.