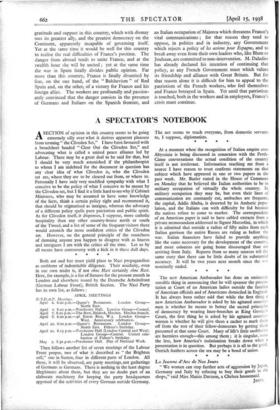 The new American Ambassador has done an eminently sensible thing

in announcing that he will sponsor the presen- tation at Court of no American ladies outside the families of American officials and of Americans domiciled in England. It has always been rather odd that while the first thing a new American Ambassador is asked by his agitated country- men is whether he means to betray the sacred principles of democracy by wearing knee-breeches at King George's Court, the first thing he is asked by his agitated country- women is whether he will give them a cachet to mark them off from the rest of their fellow-democrats by getting them presented at that same Court. Many of life's little snobberies are harmless enough—this among them ; it is singular, none the less, how America's isolationism breaks down when a presentation is in question. But perhaps it is all to the good.