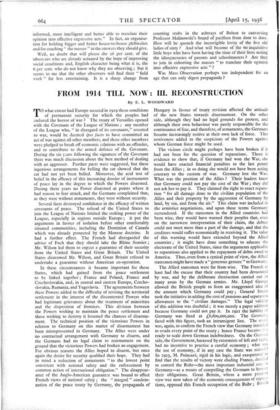 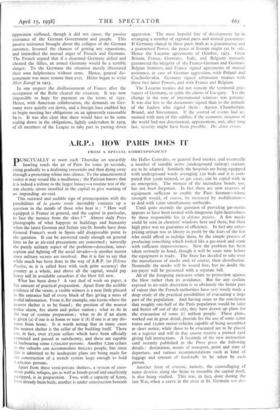 TO what extent had Europe secured in 1919 those conditions of permanent security for which the peoples had endured the horror of war ? The treaty of Versailles opened with the Covenant of the League of Nations ; any member of the League who, " in disregard of its covenants," resorted to war, would be deemed ipso facto to have committed an act of war against all other members, and these other members were pledged to break off economic relations with an offender, and to contribute to the armed defence of the Covenant. During the six years following the signature of the Covenant there was much discussion about the best method of dealing with an aggressor. Further pacts were suggested, but these ingenious arrangements for belling the cat showed that the cat had not yet been belled. Moreover, the acid test of belief in the efficacy of this increasing dossier of instruments of peace lay in the degree to which the Powers disarmed. During these years no Power disarmed at points where it had reason to fear attack, and the Germans complained that, as they were without armaments, they were without security.

Several facts destroyed confidence in the efficacy of written covenants of peace. The refusal of the United States to join the League of Nations limited the striking power of the League, especially in regions outside Europe ; it put the arguments in favour of isolation before other comfortably situated communities, including the Dominion of Canada which was already protected by the Monroe doctrine. It had a further effect. The French had disregarded the advice of Foch that they should take the Rhine frontier ; Mr. Wilson led• them to expect a guarantee of their security from the United States and Great Britain. The United States disavowed Mr. Wilson, and Great Britain refused to undertake a guarantee without American co-operation.

In these circumstances it became important for those States, which had gained from the peace settlement to be linked together ; France and Poland, France and Czechoslovakia, and, in central and eastern Europe, Czecho- slovakia, Rumania, and Yugoslavia. The agreements between these Powers added to the difficulty of revising the territorial settlement in the interest of the discontented Powers who had legitimate grievances about the treatment of minorities and the disposition of frontiers. This division between the Powers wishing to maintain the peace settlement and those wishing to destroy it lessened the chances of disarma- ment. The technical position of the victorious Powers in relation to Germany on this matter of disarmament has been misrepresented in Germany. The Allies were under no contractual arrangement with Germany to disarm, and the Germans had no legal claim to rearmament on the ground that the victorious Powers had broken an engagement. For obvious reasons the Allies hoped to disarm, but once again the desire for security qualified their hope. They had in mind a reduction of armaments " to the lowest point consistent with national safety and the enforcement by common action of international obligation." The disappear- ance of the Anglo-American guarantee was bound to affect French views of national safety ; the " integral " condem- nation of the peace treaty by Germany, the propaganda of Hungary in favour of treaty revision affected the attitude of the new States towards disarmament. On the other side, although they had no legal grounds for protest, and although their own behaviour was partly responsible for the continuance of fear, and therefore, of armaments, the Germans became increasingly restive at their own lack of force. This restiveness added to the suspicions of the Powers against whom German force might be used.

The vicious circle might perhaps have been broken if it had not been for the question of reparations. There is evidence to show that, if Germany had won the War, she would have exacted financial penalties to the last penny from the Allies ; in so doing she would not have been acting contrary to the custom of war. Germany lost the War. What was the position of the Allies ? Their leaders knew that Germany could not pay the cost of the War ; they did not ask her to pay it. They claimed the right to exact repara- tion " for all damage done to the civilian population of the Allies and their property by the aggression of Germany by land, by sea, and from the air." This claim was included in the armistice negotiations, and upon these terms Germany surrendered. If the statesmen in the Allied countries had been wise, they would have warned their peoples that, even on the narrowest interpretation of their claim, the debtor could not meet more than a part of the damage, and that the creditors would suffer economically in receiving it. The value of this warning would have extended beyond the Allied countries ; it might have done something to educate the electorate of the United States, since the arguments applicable to reparations also applied to the repayment of debts owed to America. Thus, even from a cynical point of view, the Allied statesmen might have made a " generous gesture " to Germany.

The Allied statesmen were far from wise. The French at least had the excuse that their country had been devastated by war, and by the deliberate destruction carried out in many areas by the German armies. Mr. Lloyd George allowed the British people to form an exaggerated idea of the amount which Germany could pay ; General Smuts took the initiative in adding the cost of pensions and separation allowances to the " civilian damages." The legal validity of this addition was doubtful ; it was merely a paper addition because Germany could not pay it. In 1921 the liability of Germany was fixed at £6,600,000,000. The German', faced with this figure, took an intransigent line. The resulz was, again, to confirm the French view that Germany intended to evade every point of the treaty ; hence France became Ict-s ready to scale down German indebtedness. On the German side, the Government, harassed by extremists of left and right, had no incentive to practise a careful economy ; what was the use of economy, if in any case the State was ruined ? In 1923, M. Poincare, rigid in his logic, and exasperated to find that the results of victory were eluding France, decided to control the Ruhr—the most important industrial area in Germany—as a means of compelling the Germans to honour their obligations. Great Britain, where a more prudent view was now taken of the economic consequences of repal dons, opposed this French occupation, of the Ruhr ; British opposition stiffened, though it did not cause, the passive resistance of the German Government and people. This passive resistance brought about the collapse of the German currency, lessened the chances of getting any reparations, and intensified the mutual anger of French and Germans. The French argued that if a disarmed Germany defied and cheated the Allies, an armed Germany would be a terrible danger. To the Germans the situation merely illustrated their own helplessness without arms. Hence, general dis- armament was more remote than ever. Hitler began to write Mein Kampf in 1923.

In one respect the disillusionment of France after the occupation of the Ruhr cleared the situation. It was now impossible to hope for payment on the terms of 1921. Hence, with American collaboration, the demands on Ger- many were quietly cut down, and a foreign loan enabled her to begin meeting her obligations on an apparently reasonable basis. It was also clear that there would have to be some scaling down in the obligations, lightly undertaken in 1919, of all members of the League to take part in putting down aggression. The most hopeful line of development lay in arranging a number of regional pacts and mutual guarantees. If Germany shared in these pacts both as a guaranteeing and a guaranteed Power, the peace of Europe might yet be safe. Hence the Locarno agreements of October, 1925. Great Britain, France, Germany, Italy, and Belgium mutually guaranteed the integrity of the Franco-German and German- Belgian frontiers, and France signed agreements of mutual assistance, in case of German aggression, with Poland and Czechoslovakia. Germany signed arbitration treaties with these two latter Powers, and with France and Belgium.

The Locarno treaties did not remedy the territorial grie- vances of Germany, or settle the claims of Eu agary. Yet the change in the tone of international relations was genuine. It was due less to the documents signed than to the attitude of the leaders who signed them : Austen Chamberlain, Briand, and Stresemann. If the control of events had re- mained with men of this calibre, if the economic situation of the world had not deteriorated, appeasement, and, after long last, security might have been possible. Dis aliter viswn.