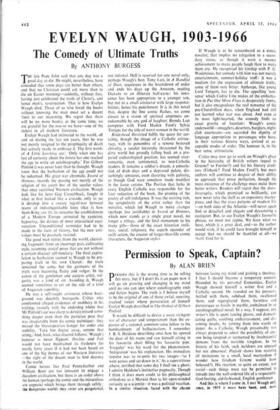 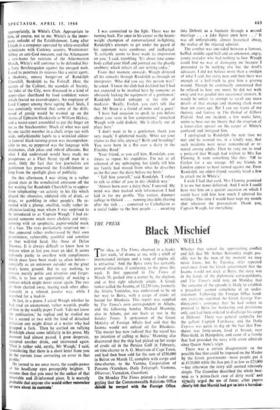 ERHAPS this is the wrong time to be telling r this story, but if I don't fix it on paper now it will go on growing and changing in my mind until no one can spot where autobiography ends and fiction begins. The truth is I believe myself to be the original of one of those awful, sneering, cracked voices whose persecution of himself Evelyn Waugh described in The Ordeal of Gilbert Pinfold.

It would be difficult to devise a more stringent test of character and temperament than the ex- posure of a rational, common-sense fellow to the bombardment of hallucinations. I remember J. B. S. Haldane describing once how he opened the door of his room and saw himself sitting in his favourite chair filling his favourite pipe. 'Irregular' was his word for the phenomenon. 'Indigestion' was his explanation. His immediate impulse was to re-unite his two images—`so I went across and sat down in it.' As a superstitious atheist, terrified that some day I shall see a ghost, I admire Haldane's instinctive pugnacity. Though I think it does more credit to his philosophical orthodoxy as a Marxist than to his open-minded curiosity as a scientist—it was a political reaction. In a similar situation, faced with the choice between losing my mind and gaining a theology. I fear I should become a temporary convert. Hounded by his personal Eumenides, Evelyn Waugh showed himself a writer first and a Catholic second. He rounded on his pursuers, battled with them, subdued theth, swallowed them, and regurgitated them, harmless and picturesque as fossils in marble, embalmed in an autobiographical novel. In a way, I suppose, any writer's life is spent taming ghosts, and domesti- cating guilts, soothing embarrassment, and dis- arming insults, by turning them into words on paper. As a Catholic, Waugh presumably was always prepared to admit the possibility of any- one being tempted or tormented by insubstantial demons from the invisible kingdom. In the history of his faith, such incidents are unusual but not abnormal. Pinfold shows him resisting all invitations to a small, local martyrdom II wonder how Graham Greene would have behaved?). His reaction, to quite an extent, was :social—such things must not be permitted to . intrude into the well-ordered life of a respectable, God-fearing, old-fashioned, English gentleman. And this is where I come in. I met Waugh oth once, in 1955 it must have been, and, most appropriately, in White's Club. Appropriate to him, of course, not to me. White's is the inner- most redoubt of the Establishment. Long after Lloyds is a computer operated by white-overalled technicians with Cockney accents, Westminster Abbey an anti-God museum, and the Athenaeum a rest-home for veterans of the Aldermaston March, White's will continue to be defended. like a Tory Berchtesgaden against the enraged mob. I used to penetrate its recesses like a secret agent, a shadowy, uneasy hanger-on of Randolph Churchill, Bardolph to his Falstaff. Here the secrets of the Cabinet, the scandals of Society, the tides of the City, were discussed in a kind of upper-class shorthand by loud confident voices which feared no eavesdroppers. An employee of Lord Copper among these ageing Basil Seals, I was constantly worried that some of the drift- wood of gossip would be washed up on the shores of Ephraim Hardcastle or William Hickey, and a noose-court assembled to put the finger on me as the beachcomber. Much of what was said by one scarlet member in a chalk- stripe suit with wide, unfashionable lapels to a wrinkled oldster in funeral black-turning-green was incomprehen- sible to me, so peppered was the language with nicknames, club jokes and inbred allusions. But what I did understand would have made me prosperous as a Fleet Street tip-off man in a week. Only the fact that few journalists are gentlemen has preserved the Establishment so long from the spotlight glare of publicity.

On this afternoon, I was sitting in a Lather glazed state in the armchaired anteroom off the bar waiting for Randolph Churchill to re-appear from telephoning—an activity in his life which played the obsessive, addicted role of drink, or drugs, or gambling in other people's. He re- turned with a plump, smallish, really rather in- offensive-looking man whom I was surprised to be introduced to as 'Captain Waugh.' I had ex- pected someone much more choleric and testy- seeming with an apoplectic, papier-mfiché mask of a face. The eyes particularly surprised me— they appeared rather embarrassed by their own prominence, vulnerable, youthful and sensitive in that well-fed head, like those of Dylan Thomas. It is always difficult to know how to behave when at last you meet an idol. It seems tediously pushy to overflow with compliments which must have been made so often before— especially as an unknown outsider on the great man's home ground. But to say nothing, to remain merely polite and attentive and forget- table, is to lose an opportunity of making a contact which might never occur again. The two of them chatted away, teasing each other affec- tionately in a relaxed, jocular way, while I searched for a lead-in.

At last, in a pause, I asked Waugh whether he had read an anonymous, rather waspish, profile of him in the weekly paper Truth. 'I do not know the publication,' he replied and he studied me for a second or two with the kind of detached irritation one might direct at a waiter who had dropped a fork. Then he carried on rallying Randolph about some infelicity in his prose. My moment had almost passed. I grew desperate, accepted another drink, and intervened again. `That is rather odd, surely, Mr Waugh,' I said, 'considering that there is a short letter from you in the current issue correcting an error in that profile.'

He turned to me once more, the candle-power of his headlamp eyes perceptibly brighter. 'I assume then that you must be the author of that miserable and .ill-informed piece. It is scarcely Probable that anyone else would either remember or care about its content*: . •

I was committed to the fight. There was no turning back. For once in his career as the heavy- weight champion of conversational in-fighting, Randolph's attempts to get under the guard of his opponent were cumbrous and ineffectual. `It certainly seems to have made its impression on you,' I said, trembling. 'It's about time some- body called your bluff and pointed out the ghastly snobbery which infects all our writing today.'

From that moment onwards, Waugh directed all his remarks through Randolph as through an interpreter. 'Who did you say this person was?' he asked. 'I knew the club had declined but I had not expected to be insulted here by someone so obviously lacking the equipment of a gentleman.' Randolph looked unhappy at the role of mediator. 'Really, Evelyn, you can't talk like that. Mr Brien is a friend of mine and a guest.'

'I have had occasion to speak to you before about your taste in low companions,' remarked Waugh with cold disdain. 'He is clearly out of place here.'

'I don't want to be a gentleman, thank you very much,' I spluttered nastily. 'What are your claims to that title, anyway? Birth and breeding? You were born in a flat over a dairy in the Finchley Road.'

`Your friend, as you call him, Randolph, con- tinues to repeat his stupidities. I'm not at all ashamed of my upbringing, but kindly tell him my family had moved from what he describes as the flat over the dairy before my birth.'

Tell him yourself,' said Randolph. 'I refuse to talk to either of you in this childish way.'

'Almost born over a dairy then,' I sneered. My mind was then packed with information I had laid in for my profile. 'The wettest, dimmest college in Oxford . . . running into debt chasing after the rich . . . converted to Catholicism as a social ladder to the best people . . . sneaking

into Debrett as a footnote through a second marriage . . . a joke figure even here . . .' It was all unforgivable, almost hysterical abuse, the malice of the rejected admirer.

The combat was one-sided between a famous, baffled, middle-aged bull and an unknown, angry, young matador who had nothing to lose. Waugh could find no way of damaging me because I pretended to be nothing else but the devil's advocate. I did not believe more than a smidgin of what I said, but every now and then there was enough of a half-truth to give him a grazing wound. Though he continually announced that he refused to hear any more, he did not walk away and was goaded into occasional answers. It would be unfair to attempt to recall any more details of that strange and shaming clash more than ten years ago. But I can see traces of my rhetoric and fantasy in The Ordeal of Gilbert Pinfold. And one incident, a few weeks later, seems to bear out my theory that the eruption of a lower-class upstart on the carpet of White's confused and intrigued him.

I apologised to Randolph the next time we met and he assured me, in a kindly way, that such incidents were never remembered or re- sented among adults. Then he rang me to read a postcard that Waugh had written to Mrs Ian Fleming. It went something like this: 'Off to Ceylon for a sea voyage. All my friends in London appear to have turned against me. Even Randolph. my oldest friend, recently hired a Iew to attack me in White's.'

I wish I had that card. Mrs Fleming promised it to me but never delivered. And I wish I could have met him on a quieter occasion on which I could have told him how much I admired his writings. This time I would have kept my month shut whatever the provocation. Thank you, Captain Waugh. for everything.