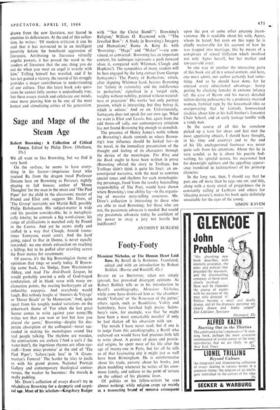 Sage and Mage of the Steam Age

WE all want to like Browning, but we find it very hard.

On the surface, be seems to have every- thing in his favour—impetuous lover who rescued Ba from the dragon (read Professor Devane here on Browning as Perseus), nightly playing to full houses; author of 'Home Thoughts' for the man in the street and The Pied Piper' for the child in the classroom; master of Pound and Eliot and, suggests Mr. Drew, of 'The Group' (certainly not Martin Bell; possibly Philip Hobsbaum). His subject-matter is wide and his passion considerable; he is metaphysi- cally knotty; he controls a big word-circus; his range of civilisations is matched only by Pound in the Cantos. And yet he seems stuffy and stuffed in a way that Clough, Arnold (some- times Tennyson, even) aren't. And the hard going, equal to that in Donne, is never equally rewarded: no one minds exhaustion on reaching a hilltop, but to be puffed after crawling across the floor makes for resentment.

Of course, it's the big Browningian theme of optimism that rings so sourly today. If Brown- ing came back, via Sludge, from Westminster Abbey, and read The Anti-Death League, he would probably unwind a mile of God-troped confutation, all in blank verse with many ex- clamation points, the roaring borborygms of an unhealthy eupepsia. And everybody would laugh. But nobody laughs at 'Amours de Voyage' or 'Dover Beach' or 'In Memoriam.' And, quite apart from his toughly noded variations on the pokerwork theme of 'For when the last great Scorer comes to write against your name/He writes not that you won or lost but how you played the game,' Browning—despite his des- perate absorption of the colloquial—never suc- ceeded in making his monologues sound like real people talking. The rhythms are wooden, the contractions are archaic (`And a cat's i' the water-butt'), the ingenious rhymes are often eye- stuff—`from mice/promise' at the end of The Pied Piper'; 'failure/pale lure' in 'A Gram- marian's Funeral.' The harder he tries to jostle us with his grand pianos, National Portrait Gallery and contemporary theological contro- versies, the weaker he becomes : the muscle. is really padding.

Mr. Drew's collection of essays doesn't try to rehabilitate Browning for a dyspeptic and scepti- cal age.. Most of his scholars—Kingsbury Badger

with "See the Christ Stand!": Browning's Religion,' William 0. Raymond with "'The Jewelled Bow": A Study in Browning's Imagery and Humanism,' Roma A. King Jr. with 'Browning: "Mage" and "Maker" '—are con- vinced, or convicted : Browning has an important content, his technique represents a push forward (does it, compared with Whitman, Clough and Hopkins?). The sympathies of many readers will be best engaged by the long extract from George Santayana's 'The Poetry of Barbarism,' which, after slapping Whitman hard, berates Browning for 'failure in rationality and the indifference to perfection,' signalised in a 'turgid style, weighty without nobility, pointed without natural- ness or precision.' His works 'not only portray passion, which is interesting, but they betray it, which is odious.' And so on. Unfortunately, Santayana does not speak for our own age. What we want is Eliot and Leavis, but, apart from the odd throw-off sally, our contemporary criticism has not found Browning big enough to demolish.

The presence of Henry James's noble tribute on Browning's death reminds us where Brown- ing's true influence should be looked for—in the novel, in the immediate presentation of the thought and feeling of its characters through the device of the monologue. The Ring and the Book ought to have been written in prose (Browning offered the story to Trollope, but Trollope didn't think it quite his line): an un- constipated narrative, with the need to contrive special tones and rhythms for each monologuis- ing personage, freed from the tawdry bejewelling responsibility of The Poet, would have shown where Browning's true ability lay—in the organis- ing of massive story-telling structures. Mr. Drew's collection is interesting to those who are able to read Browning; for those who are not, the passionate advocate is needed. But would any passionate advocate today be confident of his power to sway a jury not hostile but indifferent?