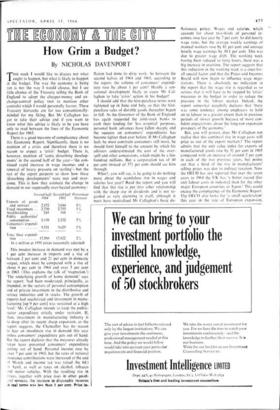 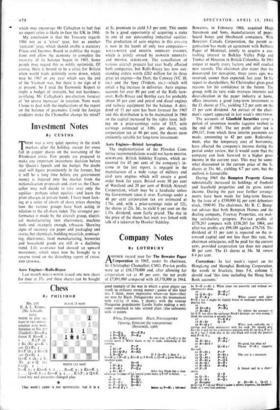 HE NOHOW a M OrTV

How Grim a Budget?

'Tit's week I would like to discuss not what I ought to happen, but what is likely to happen in the budget. The way the economy is being run is not the way I would choose, but I see little chance of the Treasury telling the Bank of England to adopt the cheaper-money and ex- change-control policy (not to mention other controls) which I would personally favour. These Treasury hierarchs are far too conventionally- minded for my liking. But Mr Callaghan has got to take their advice and if you want to know what this advice is likely to be you have only to read between the lines of the Economic Report for 1965.

There is a good measure of complacency about this Economic Report. Significantly, there is no mention of a crisis and therefore there is no reason to expect a 'crisis' budget. There is, however, mention of 'some disturbing develop- ments' in the second half of the year—`the con- tinued rapid increase in wage incomes and a renewal of heavy pressure on sterling'—but the rest of the report purports to show how these 'disturbing developments' were met and over- come. This is how they estimate the change in demand in our supposedly over-heated economy :

In million at 1958 prices (seasonally adjusted)

This modest increase in demand was met by a 1 per cent increase in imports and a rise of between 2 per cent and 2+ per cent in domestic output, which must be compared with a rise of about 4 per cent in 1964 and over 5 per cent in 1963. (This explains the talk of `stagnation.') 'The underlying growth of home demand,' says the report. 'had been moderated, principally, as intended, in the sectors of personal consumption and of private investment in the distributive and service industries and in stocks. The growth of exports had accelerated and investment in manu- facturing [up 9 per cent] was sustained at a high level.' Mr. Callaghan intends to keep the public- sector expenditure strictly under restraint. If, then, investment in manufacturing industry is to drop after its recent sharp expansion, as the report suggests, the Chancellor has no reason to fear an inordinate rise in demand this year unless consumers' expenditure gets out of hand. But the report declares that the measures already taken have prevented consumers' expenditOre getting out of hand. Personal income rose by over 7 per cent in 1965, but the rates of national insurance contributions were increased at the end of March and income tax was raised (by 6d.) i April, as well as taxes on alcohol, tobacco Ind motor vehicles. With the resulting rise in Prices, together with price rises in other goods . nd services, the increase in disposable incomes .n real terms was less than I per cent. Price in-

1% flation had done its dirty work. So between the second halves of 1964 and 1965, according to the report, the volume of consumers' expendi- ture rose by about 1 per cent! Hardly a sen- sational development likely to cause Mr Cal- laghan to take 'crisis' action in his budget!

I should add that the hire-purchase terms were tightened up in June and July, so that the hire- purchase sales of durable goods thereafter began to fall. As the Governor of the Bank of England has again requested the joint-stock banks to curb their lending for 'less essential' purposes, personal bank advances have fallen sharply and the squeeze on consumers' expenditures has become tighter than ever before. If Mr Callaghan feels he must constrain consumers still more, he should limit himself to the amount by which his advisers underestimated the cost of the over- spill and other concessions, which might be a few hundred millions. But a corporation tax of 40 per cent instead of 371 per cent should see him through.

What!, you will say, is he going to do nothing more about the scandalous rise in wages and salaries last year? Read the report and you will find that this rise is put into sober relationship with the sharp rise in dividends and is not re- garded as very alarming in itself, although it must have neutralised Mr Callaghan's basic de- flationary policy. Wages and salaries, which account for about two-thirds of personal in- comes, rose last year by 7 per cent. So did hourly wage rates, but the average weekly earnings of manual workers rose by 81 per cent and average hourly wage earnings by 10.1 per cent. This was due to greater wage drift. The working week having been reduced to forty hours, there was a big increase in overtime. The report suggests that this reduction in the working week is a once-for- all special factor and that the Prices and Incomes Board will now begin to influence wage nego- tiations. There is absolutely no indication in the report that the wage rise is regarded as so serious that it will have to be stopped by 'crisis' measures in the budget in order to reduce the pressure in the labour market. Indeed, the report somewhat naughtily declares that 'there was some tendency among employers to hold on to labour to a greater extent than in previous periods of slower growth because of more con- fident expectations about the long-run expansion prospects of the economy.'

But, you will protest, does Mr Callaghan not realise that this continual rise in wage costs will price us out of the export markets? The report admits that the unit value index for exports of manufactured goods rose by 31 per cent in 1965 compared with an increase of around 2 per cent in each of the two previous years, but points out that a third of the rise in manufacturers' selling prices was due to indirect taxation. Now the OECD has just reported that over the seven years to 1964 the UK has 'a better record [for unit labour costs in industry] than for the other major European countries or Japan.' This could excuse the complacency of the Economic Report. The OECD also looks for 'a small acceleration' this year in the rate of European expansion,

• which may encourage Mr Callaghan to feel that

no export crisis is likely to face the UK in 1966.

My conclusion is that the Treasury regards 1966 not as a 'crisis' year, but as another `restraint' year, which should enable a statutory Prices and Incomes Board to stabilise the wages front and allow the economy to complete the recovery of its balance begun in 1965. Some people may regard this as wildly optimistic. Of course, there is bound to be a crisis for Britain when world trade definitely turns down, which may be 1967 or any year which sees the end of the Vietnam war, but there is no sign of it at present. So I read the Economic Report to imply a budget of restraint, but not harshness, justifying Mr Callaghan's pre-election forecast of 'no severe increases' in taxation. Next week I hope to deal with the implications of the report on the balance of payments. Could the foreign creditors make the Chancellor change his mind?