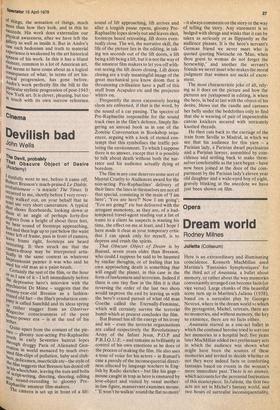 Ihe Devil, probably I hat Obscure Object of Desire (Academy) I dutifully went to see, before it came off, Robert Bresson's ;nuch-praised Le Diable, Probab/ement — 'a miracle' The Times. It °ccurred to me, shortly before I very reveresIlY walked out, on your behalf that he 'ost use very short cameramen. A typical shot shows floorboards, looking down at ,thelo at an angle of perhaps forty-five uegrees from a height of about three feet, sYe hear sound of footsteps approaching.

leet and then legs up to just below the waist

rIter left of frame, pass in front of camera, caVe frame right, footsteps are heard retreating. It then struck me that the ,e.anlera-droop may be interpreted artis ',Ically in the same context as whatever 4111pressionist painter it was who said he

used his old man as a paint-brush.

O Certainly the rest of the film, or the hour SO I saw of it — I left immediately before "le depressive hero's interview with the PsYchiatrist Dr Mime — suggests that the seventy-year-old Bresson as a fashioncrazed old fart — the film's production comPanY is called Sunchild and its ideas spring °11,* rather stagger from an Observer agazine consciousness of the post "°wer-power era — is at the end of his tether.

The camera is set up in front of a lift: sound of lift approaching, lift arrives and after a longish pause opens, gloomy PreRaphaelite lopes slowly out and leaves shot, footsteps heard retreating, lift doors eventually close. The wit, the narrative skill, the life of the picture lies in the editing, in taking ten seconds out of the lift doors, a lift being a lift being a lift, but it is not the way of the amateur film makers to let you off without seeing the lift doors closing. Lift doors closing are a truly meaningful image of the great mechanical you know doom that is threatening civilisation have a puff of this stuff from Acapulco etc and the projector whirrs on.

The film in any case deserves some sort of Mental Cruelty to Audiences award for the non-acting Pre-Raphaelites' delivery of their lines: the lines in themselves are not all that special, consisting in the main of `I am here'; `You are here?' Now I am going'; `You are going?' etc but delivered with the arrogant monotony, as they are, of a badtempered travel-agent reading out a list of trains to a client he suspects is wasting his time, the effect on me at least, and I hope I have made it clear as your temporary critic that I can speak only for myself, is to depress and crush the spirits.

That Obscure Object of Desire is by

Bunuel, seven years older than Bresson, who could I suppose be said to be haunted by similar thoughts, or of feeling that his own approaching death is something that will engulf the planet, in this case in the form of lawlessness and terrorism. Indeed if there is one tiny flaw in the film it is that reversing the order of the last two shots would improve the end by leaving us with the hero's crazed pursuit of what old man Goethe called the Eternally-Feminine, which will certainly survive the terrorist bomb which at present concludes the film. But Bunuel has all the energy of his irony and wit — even the terrorist organisations are called respectively the Revolutionary Army of the Infant Jesus, P.O.P and P.R.I.Q.U.E. —and remains as brilliantly in control of his own emotions as he does of the process of making the film. He also uses a tone of voice for his actors — in Bunuel's case a parody of the inconsequential direct ness affected by language teachers in English by Radio sketches — but like his gage — mouse caught in trap as hero is ensnared by love-object and visited by venal motherin-law figure, manservant examines mouse, 'E won't be walkin' round the flat no more' — it always comments on the story or the way of telling the 'story. Any statement is so hedged with shrugs and winks that it can be taken as seriously or as flippantly as the audience pleases. It is the hero's servant's German friend we never meet who is quoted quoting Nietzsche on `Man, when thou goest to woman do not forget the horsewhip,' and another the servant's friends we never meet who makes the moral judgment that women are sacks of excrement.

The most characteristic joke of all, relying as it does on the picture and how the pictures are juxtaposed in editing, is when the hero, in bed at last with the object of his desire, blows out the candle and caresses her belly under the bedclothes only to find that she is wearing of pair of impenetrable canvas knickers secured with intricately knotted threads.

He then cuts back to the carriage of the train from Seville to Madrid, in which we see that his audience for this yarn — a Parisian lady, a Parisian dwarf psychiatrist and a Parisian lawyer, assembled by coincidence and settling back to make themselves Comfortable as the yarn began — have now been joined at the door of the compartment by the Parisian lady's eleven year old daughter and a wide-eyed boy of eight, gravely blinking at the anecdote we have just been shown on film.