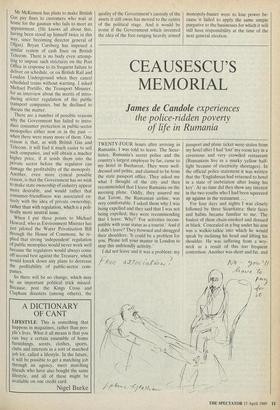 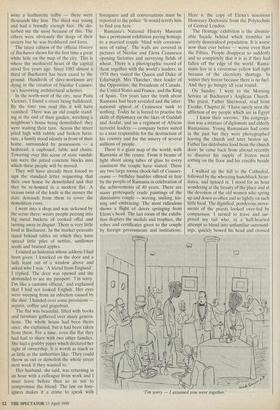 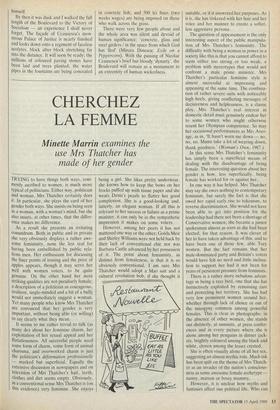 TWENTY-FOUR hours after arriving in Rumania, I was told to leave. The Sicur- itatea, Rumania's secret police and the country's largest employer by far, came to my hotel in Bucharest. They were well- dressed and polite, and claimed to be from the state passport office. They asked me what I thought of the city and then recommended that I leave Rumania on the morning plane. Oddly, they assured me that Tarom, the Rumanian airline, was very comfortable. I asked them why I was being expelled and they said that I was not being expelled; they were recommending that I leave. Why? 'For activities incom- patible with your status as a tourist.' And if I didn't leave? They frowned and shrugged their shoulders: 'It could be a problem for you. Please tell your master in London to stop this unfriendly activity.'

I did not leave and it was a problem: my

passport and plane ticket were stolen from my hotel after .I had 'lost' my room key in a cavernous and very crowded restaurant (Rumanians live in a murky yellow half- light because of electricity shortages). In the official police statement it was written that the 'Englishman had returned to hotel in a state of inebriation after losing his key'. At no time did they show any interest in the two youths who I had been squeezed up against in the restaurant....

For four days and nights I was closely followed by three Sicuritatea: their faces and habits became familiar to me. The foulest of them chain-smoked and dressed in black. Concealed in a bag under his arm was a walkie-talkie into which he would speak by inclining his head and lifting his shoulder. He was suffering from a wry- neck as a result of this too frequent contortion. Another was short and fat, and wore a leatherette trilby — there were thousands like him. The third was young and had a friendly enough face. He dis- turbed me the most because of this. The others were obviously the dregs of their society but he was freshfaced and keen.

The latest edition of the official History of Bucharest shows for the first time a great white hole on the map of the city. This is where the mediaeval heart of the capital stood five years ago. Since 1985 almost a third of Bucharest has been razed to the ground. Hundreds of slave-workmen are dying in the creation of Nicolae Ceauses- cu's harrowing architectural schemes.

In the north-west of the city, near Piata Victorei, I found a street being bulldozed. By the time you read this it will have vanished. There was an old couple stand- ing at the end of their garden, watching a neighbour's house being demolished: they were waiting their turn. Across the street piled high with rubble and broken furni- ture, a family stood silently in front of their home, surrounded by possessions — a bedstead, a cupboard, table and chairs. Towering over this scene of state vandal- ism were the pitted concrete blocks into which these people will be moved.

They will have already been forced to sign the standard letter requesting that their own house be demolished and that they be re-housed in a modern flat. A vicious twist of the knife is the money the state demands from them to cover the demolition costs.

I went into a shop and was sickened by the scene there: weary people peering into big metal buckets of cooked offal and turning away in disgust. There is very little food in Bucharest. In the market peasants stand behind tables on which they have spread little piles of nettles, sunflower seeds and bruised apples.

I visited an historian whose address I had been given. I knocked on the door and a lady leant out of a window above and asked who I was: 'A friend from England', I replied. The door was opened and she demanded to see my passport: 'I'm sorry. I'm like a customs official,' and explained that I had not looked English. Her eyes were weeping from an infection caused by the dust. I handed over some provisions aspirin, coffee and grapefruit.

The flat was beautiful, filled with books and furniture gathered over many genera- tions. The whole house had been theirs once, she explained, but it had been taken from them. For a time, even the flat they had had to share with two other families. She had a grubby paper which declared her right of ownership. It is worth as much or as little as the authorities like: 'They could throw us out or demolish the whole street next week if they wanted to.'

Her husband, she said, was returning in an hour with a colleague from work and I must leave before then so as not to compromise the friend. The law on fore- igners makes it a crime to speak with

foreigners and all conversations must be reported to the police: 'It would terrify him to find you here.'

Rumania's National History Museum has a permanent exhibition paying homage to a married couple 'blind with covetous- ness of ruling'. The walls are covered in pictures of Nicolae and Elena Ceausescu opening factories and surveying fields of wheat. There is a photographic record of them together with the world's leaders; in 1978 they visited the Queen and Duke of Edinburgh, Mrs Thatcher, then leader of the Opposition, the Presidents of Canada, the United States and France, and the King of Spain. Ten years later the truth about Rumania had been revealed and the inter- national appeal of Ceausescu sunk to nothing. Today he is forced to practise his skills of diplomacy on the likes of Gaddafi and Arafat, and on a regiment of African terrorist leaders — company better suited to a man responsible for the destruction of his country and for the misery of several millions of people.

There is a giant map of the world, with Rumania at the centre. From it beams of light shoot along tubes of glass to every continent the couple have visited. There are two large rooms chock-full of Ceauses- ceana — birthday baubles offered in fear by the people of Rumania in celebration of the achievements of 40 years. There are many grotesquely crude paintings of the diminutive couple — waving, smiling, kis- sing and embracing. The most ridiculous shows a flight of doves springing from Elena's head. The last room of the exhibi- tion displays the medals and trophies, the robes and certificates given to the couple by foreign governments and institutions.

Here is the copy of Elena's notorious Honorary Doctorate from the Polytechnic of Central London.

The Homage exhibition is the abomin- able façade behind which trembles an utterly demoralised population. It is worse now than ever before — worse even than the Fifties. People disappear so suddenly and so completely that it is as if they had fallen off the edge of the world. Ruma- nians live in a cavernous yellow half-light because of the electricity shortage. In winter they freeze because there is no fuel. And they go hungry all year round.

On Sunday, I went to the Morning Service at Bucharest's Anglican Church. The priest, Father Sherwood, read from Exodus, Chapter iii: 'I have surely seen the affliction of my people which are in Egypt . . . I know their sorrows.' His congrega- tion was a mixture of diplomats and elderly Rumanians. Young Rumanians had come in the past but they were photographed leaving the church and later beaten up. Father Ian distributes food from the church door; he came back from abroad recently to discover his supply of frozen meat rotting on the floor and his crucifix beside it.

I walked up the hill to the Cathedral, followed by the wheezing hunchback Sicur- itatea, and tiptoed in. I stood for an hour wondering at the beauty of the place and at the devotion of the old women who spring up and down so often and so lightly on such little food. The dignified, ponderous move- ments of the priests looked over-fed by comparison. I turned to leave and sur- prised my tail who, in a half-hearted attempt to blend into unfamiliar surround- ings, quickly bowed his head and crossed 'I'm sorry — 1 assumed you were together.' himself.

By then it was dusk and I walked the full length of the Boulevard to the Victory of Socialism — an experience I shall never forget. The façade of Ceausescu's mon- strous Palace of Justice is nearly finished and looks down onto a regiment of faceless acolytes, bloCk after block stretching far into the distance. It will soon be ready; the millions of coloured paving stones have been laid and trees planted; the water pipes in the fountains are being concealed in concrete fish; and 500 lei fines (two weeks wages) are being imposed on thoSe who walk across the grass.

There were very few people about and the whole area was silent and devoid of human significance: 'concrete, glass and steel girders / in the space from which God has fled' (Mircea Dinescu: Exile on a Peppercorn). With the passing of Nicolae Ceausescu's brief but bloody 'dynasty', the Boulevard will remain as a monument to an extremity of human wickedness.