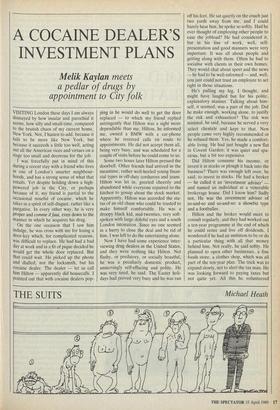 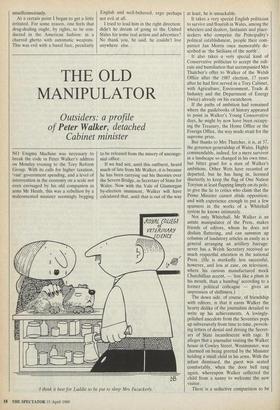 a pedlar of drugs by appointment to City folk

VISITING London these days I am always dismayed by how insular and parochial it seems, how silly and small-time, compared to the brutish chaos of my current home, New York. Not, I hasten to add, because it fails to be more like New York, but because it succeeds a little too well, acting out all the American vices and virtues on a stage too small and decorous for the job.

I was forcefully put in mind of this during a recent stay with a friend who lives in one of London's smarter neighbour- hoods, and has a strong sense of what that entails. Yet despite holding down a high- powered job in the City, or perhaps because of it, my friend is partial to the occasional noseful of cocaine, which he takes in a spirit of self-disgust, rather like a purgative. In every other way, he is very proper and comme it faut, even down to the manner in which he acquires his drug.

On the one occasion that I saw him indulge, he was cross with me for losing a door-key which, for complicated reasons, was difficult to replace. He had had a bad day at work and in a fit of pique decided he would get the whole door replaced. But that could wait. He picked up the phone and dialled, not the locksmith, but his cocaine dealer. The dealer — let us call him Hilton — apparently did housecalls. I pointed out that with cocaine dealers pop- ping in he would do well to get the door replaced — to which my friend replied astringently that Hilton was a sight more dependable than me. Hilton, he informed me, owned a BMW with a car-phone where he received calls en route to appointments. He did not accept them all, being very busy, and was scheduled for a couple of visits before he could come to us.

Some two hours later Hilton pressed the doorbell. Other friends had arrived in the meantime, rather well-heeled young finan- cial types in off-duty corduroys and jeans. Hilton was let in, greeted cheerily and abandoned while everyone repaired to the kitchen to gossip about the stock market. Apparently, Hilton was accorded the sta- tus of an old chum who could be trusted to make himself comfortable. He was a droopy black kid, mid-twenties, very soft- spoken with large doleful eyes and a south London intonation. Since no one seemed in a hurry to close the deal and be rid of him, I was left to do the entertaining alone.

Now I have had some experience inter- viewing drug dealers in the United States, and they were nothing like Hilton. Not flashy, or predatory, or socially boastful, he was a peculiarly domestic product, unnervingly self-effacing and polite. He was very tired, he said. The Easter holi- days had proved very busy and he was run off his feet. He sat quietly on the couch just two yards away from me, and I could barely hear him, he spoke so softly. Had he ever thought of employing other people to ease the jobload? He had considered it, but in his line of work, well, self- presentation and good manners were very important. It was all about people and getting along with them. Often he had to socialise with clients in their own homes. They would chat about sport and the news — he had to be well-informed — and, well, you just could not trust an employee to act right in those situations.

He's pulling my leg, I thought, and might have laughed but for his polite, explanatory manner. Talking about him- self, it seemed, was a part of the job. Did he make enough, working alone, to justify the risk and exhaustion? The risk was minimal, he said, because he served a very select clientele and kept to that. New people came very highly recommended or he refused them. Yes, he made a comfort- able living. He had just bought a new flat in Covent Garden; it was quiet and spa- cious, but a bit too expensive.

Did Hilton consume his income, or invest it in stocks or plough it back into the business? There was enough left over, he said, to invest in stocks. He had a broker — he called it an 'investment adviser' and named an individual at a venerable brokerage house. Did I know him? Sadly not. He was the investment adviser of so-and-so and so-and-so: a showbiz type and a footballer.

Hilton and the broker would meet to consult regularly, and they had worked out a ten-year programme at the end of which he could retire and live off dividends. I wondered if he had an ambition to be or do a particular thing with all that money behind him. Not really, he said softly. He planned to open other businesses, a fine foods store, a clothes shop, which was all part of the ten-year plan. The trick was to expand slowly, not to alert the tax man. He was looking forward to paying taxes but not quite yet. All this he volunteered unselfconsciously.

At a certain point I began to get a little irritated. For some reason, one feels that drug-dealing ought, by rights, to be con- ducted in the American fashion: in a charred ghetto with automatic weapons. This was evil with a banal face, peculiarly English and well-behaved, ergo perhaps not evil at all.

I tried to lead him in the right direction: didn't he dream of going to the United States for some real action and adventure? No thank you, he said, he couldn't live anywhere else.