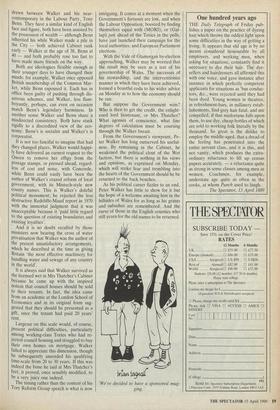 THE Daily Telegraph of Friday pub- lishes a paper on the practice of dyeing hair which throws the oddest light upon some difficulties in the way of getting a living. It appears that old age is by no means considered honourable by all employers, and working men, when asking for situations, constantly find it necessary to dye their hair. The dye- sellers and hairdressers all affirmed this with one voice, and gave instance after instance in which perfectly competent applicants for situations as 'bus conduc- tors, &c., were rejected until they had been dyed. Young women in theatres, in refreshment-bars, in millinery estab- lishements, find grey hair fatal, and are compelled, if that misfortune falls upon them, to use dye, cheap bottles of which are sold to working folk literally by the thousand. So great is the dislike to employ the middle-aged, that a dread of the feeling has penetrated into the entire servant class, and it is this, and not vanity, which produces the extra- ordinary reluctance to fill up census papers accurately, — a reluctance quite as strong in some classes among men as women. Coachmen, for example, understate age quite as often as the cooks, at whom Punch used to laugh.