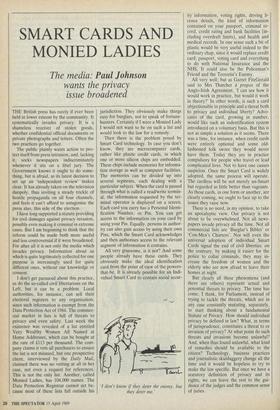 THE British press has rarely if ever been held in lower esteem by the community. It systematically invades privacy. It is a shameless receiver of stolen goods, whether confidential official documents or private photographs and letters. Often the two practices go together.

The public plainly wants action to pro- tect itself from press intrusion, and, lacking it, socks newspapers indiscriminately whenever it sits on a libel jury. The Government knows it ought to do some- thing, but is afraid, as its latest decision to set up an independent review' makes clear. It has already taken on the television duopoly, thus inviting a steady trickle of hostile propaganda on all four channels, and feels it can't afford to antagonise the press also, this side of the election.

I have long supported a statute providing for civil damages against privacy invasion, possibly even making it criminal in extreme cases. But I am beginning to think that the reform could be made both more useful and less controversial if it were broadened. For after all it is not only the media which invades privacy. Information about us which is quite legitimately collected for one purpose is increasingly used for quite different ones, without our knowledge or consent.

I don't get paranoid about this practice, as do the so-called civil libertarians on the Left, but it can be a problem. Local authorities, for instance, can sell their electoral registers to any organisation, since such information is exempt from the Data Protection Act of 1984. The commer- cial market in lists is full of threats to privacy and even safety. Last week the existence was revealed of a list entitled Very Wealthy Women All Named at Home Addresses, which can be bought at the rate of £113 per thousand. The com- pany claims it vets all purchasers to ensure the list is not misused, but one prospective client, interviewed by the Daily Mail, claimed there was no vetting at all in her case, not even a request for references. This is not the only list. Another, called Monied Ladies, has 104,000 names. The Data Protection Registrar cannot act be- cause most of these lists fall outside his

jurisdiction. They obviously make things easy for burglars, not to speak of fortune- hunters. Certainly if I were a Monied Lady I would not want to be on such a list and would look to the law for a remedy.

Then there is the problem posed by Smart Card technology. In case you don't know, they are microcomputer cards, rather like plastic credit cards, in which one or more silicon chips are embedded. These chips include memories for informa- tion storage as well as computer facilities. The memories can be divided up into several segments, each dealing with a particular subject. When the card is passed through what is called a read/write termin- al, the information requested by the ter- minal operator is displayed on a screen. Each card you carry has a Personal Identi- fication Number, or Pin. You can get access to the information on your card by using your Pin. Equally, persons in author- ity can also gain access by using their own Pins, which the Smart Card acknowledges and then authorises access to the relevant segment of information it contains.

All very gruesome, is it not? And some people already have these cards. They obviously make the ideal identification card from the point of view of the powers- that-be. It is already possible for an Indi- vidual Smart Card to contain social secur- 1 don't know if they deter the enemy, but they deter me.' ity information, voting rights, driving li- cence details, the kind of information contained on your passport, criminal re- cord, credit rating and bank facilities (in- cluding overdraft limits), and health and medical records. In one sense such a bit of

plastic would be very useful indeed to the ordinary chap, since it would replace credit

card, passport, voting card and everything to do with National Insurance and the NHS. It could also be the Policeman's Friend and the Terrorist's Enemy.

All very well; but as Garret FitzGerald said to Mrs Thatcher a propos of the

Anglo-Irish Agreement, 'I can see how it would work in practice, but would it work in theory?' In other words, is such a card objectionable in principle and a threat both to privacy and individual liberty? Advo- cates of the card, growing in number, would like such an indentification system introduced on a voluntary basis. But this is not as simple a solution as it seems. There was a time, for instance, when credit cards were entirely optional and some old- fashioned folk swore they would never have them. Today they are in practice compulsory for people who travel or lead complicated lives. Not to have one causes suspicion. Once the Smart Card is widely adopted, the same process will operate. The cardless will be not merely un-Smart but regarded as little better than vagrants. As these cards, in one form or another, are clearly coming, we ought to face up to the issues they raise now.

There is no need, in my opinion, to take an apocalyptic view. Our privacy is not about to be overwhelmed. Not all news- papers invade privacy all the time. Not all commercial lists are 'Burglar's Bibles' or 'Con-Men's Charters'. Nor will even the universal adoption of individual Smart Cards signal the end of civil liberties: on the contrary, by making it easier for the police to collar criminals, they may in- crease the freedom of women and the elderly who are now afraid to leave their homes at night.

But clearly all these phenomena (and there are others) represent actual and potential threats to privacy. The time has come, I think, for Parliament, instead of trying to tackle the threats, which are in any case constantly mutating, separately, to start thinking about a fundamental Statute of Privacy. How should individual privacy be defined in law? What, in terms of jurisprudence, constitutes a threat to or invasion of privacy? At what point do such threats and invasions become unlawful?

And, when thus found unlawful, what kind of remedies should be available to the citizen? Technology, business practices and journalistic skulduggery change all the time and it would be hopeless to try to make the law specific. But once we have a statutory definition of privacy and its rights, we can leave the rest to the gui- dance of the judges and the common sense of juries.