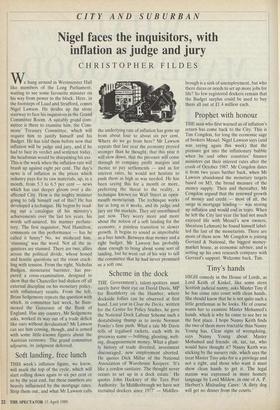 Nigel faces the inquisitors, with inflation as judge and jury

We hang around in Westminster Hall like members of the Long Parliament, waiting to see some favourite minister on his way from power to the block. Here, in the footsteps of Laud and Strafford, comes Nigel Lawson. He strides up the stone stairway to face his inquisitors in the Grand Committee Room. A suitably grand com- mittee is there to examine him, the Com- mons' Treasury Committee, which will require him to justify himself and his Budget. He has told them before now that inflation will be judge and jury, and if he had to face its verdict and sentence today, the headsman would be sharpening his axe. This is the week when the inflation rate will brush up against eight per cent. The day's news is of inflation in the prices which industry pays for its raw materials, up, in a month, from 5.3 to 6.5 per cent — news which has cast deeper gloom over a dis- affected City. How is the mighty minister going to talk himself out of this? He has developed a technique. He begins by read- ing out a catalogue of his ministry's achievements over the last ten years, his words self-assured, his manner perfunc- tory. The first inquisitor, Neil Hamilton, comments on this performance — has he called it funny? No, we misheard him, 'stunning' was the word. Not all the in- quisitors are stunned. There are two, allies across the political divide, whose honed and hostile questions set the room crack- ling with tension. From the right, Nicholas Budgen, monetarist barrister, has pre- pared a cross-examination, designed to show that the Chancellor had shaken off all external discipline on his monetary policy, with inflationary results. From the left, Brian Sedgemore repeats the question with which, in committee last week, he flum- moxed the Governor of the Bank of England. Has any country, Mr Sedgemore asks, worked its way out of a trade deficit like ours without devaluation? Mr Lawson can see him coming, though, and is armed with some little-known figures about the Austrian economy. The grand committee adjourns, its judgment deferred.