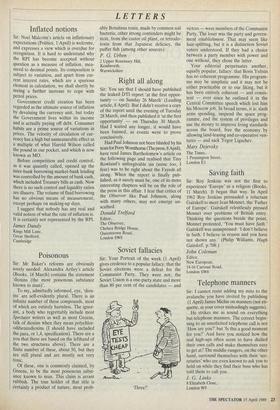 Sir: Noel Malcolm's article on inflationary expectations (Politics, 1 April) is welcome, and expresses a view which is overdue for recognition. It is hard to understand why the RPI has become accepted without question as a measure of inflation, mea- sured to decimal points. Its composition is subject to variation, and apart from cur- rent interest rates, which are a spurious element in calculation, we shall shortly be seeing a further increase to cope with petrol prices.

Government credit creation has been regarded as the ultimate source of inflation by devaluing the currency unit, but today the Government lives within its income and is actually paying off debt. Consumer habits are a prime source of variations in prices. The velocity of circulation of cur- rency has a high but unmeasurable effect as a multiple of what Harold Wilson called the pound in our pocket, and which is now known as MO.

Before competition and credit control, as it was quaintly called, opened up the inter-bank borrowing market-bank lending was controlled by the amount of bank cash, which included Treasury bills as cash. Now there is no such control and liquidity ratios are illusory. The volume of fluid borrowing has no obvious means of measurement, except perhaps on making-up days.

I suggest that nobody has any real and valid notion of what the rate of inflation is. It is certainly not represented by the RPI. James Dandy