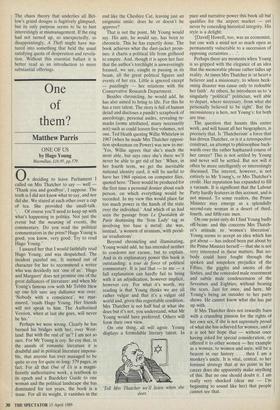 ONE OF US by Hugo Young

0 n deciding to leave Parliament I called on Mrs Thatcher to say — well 'Thank you and goodbye', I suppose. The truth is I did not know what to say, and nor did she. We stared at each other over a cup of tea. She provided the small-talk.

. . Of course you'll need to keep up with what's happening in politics. Not just the events but the meaning of events, the commentary. Do you read the political commentators in the press? Hugo Young is good, you know, very good. Try to read Hugo Young.'

I assured her that I would faithfully read Hugo Young, and was despatched. The incident puzzled me. It seemed out of character for her to recommend a writer who was decidedly not 'one of us'. 'Hugo and Margaret' does not promise one of the great dalliances of literature: and when Mr Young's famous row with Mr Tebbit blew up one felt sure any dalliance was over. 'Nobody with a conscience', we mur- mured, 'reads Hugo Young. Her friends will not speak to him. The Authorised Version, when at last she goes, will never be his.'

Perhaps we were wrong. Clearly he has burned his bridges with her, over West- land. But with the rest of `us'? I am not so sure. For Mr Young is coy. So coy that, in the annals of romantic literature it is doubtful and in political literature impossi- ble, that anyone has ever managed to be quite so coy for quite so long: 579 pages, in fact. For all that One of Us is a magni- ficently authoritative work, a textbook to its epoch and a Baedeker Guide to one woman and the political landscape she has dominated for ten years, the book is a tease. For all its weight, it vanishes in the end like the Cheshire Cat, leaving just an enigmatic smile: does he or doesn't he approve?

That is not the point, Mr Young would say. His aim, he would say, has been to chronicle. This he has expertly done. The book achieves what the dust-jacket prom- ises: it charts a political life from girlhood to empire. And, though it is upon her face that the author's torchlight is unwaveringly focused, we see, caught in passing in its beam, all the great political figures and events of her era. Little is ignored except — puzzlingly — her relations with the Conservative Research Department.

Besides chronicling, he would add, he has also aimed to bring to life. For this he has a rare talent. The story is full of human detail and discloses a pundit's scrapbook of anecdotage, personal asides, revealing re- marks (some attributed, many necessarily not) such as could leaven five volumes, not one. Ted Heath quoting Willie Whitelaw in 1967 (when he made Mrs Thatcher opposi- tion spokesman on Power) was new to me: 'Yes, Willie agrees that she's much the most able, but says once she's there we'll never be able to get rid of her.' When, in her fourth term, we get the inevitable national identity card, it will be useful to have her 1968 opinion on computer files, quoted here: 'There would be produced for the first time a personal dossier about each person, on which everything would be recorded. In my view this would place far too much power in the hands of the state over the individual.' And which of us had seen the passage from Le Quotidien de Paris dismissing the 'Iron Lady' tag as involving too base a metal: she was, instead, 'a women of uranium, with pecul- iar irradiations'.

Beyond chronicling and illuminating, Young would add, he has intended neither to condemn nor excuse, but to explain. And in its explanatory power this book is outstanding: a tour de force of political commentary. It is just that — to me — a full explanation can hardly fail to bring with it an adjudication, however implicit, however coy. For what it's worth, my reading is that Young thinks we are all rather vulgar and that it's a vulgar old world and, given this regrettable condition, Mrs Thatcher is not half bad at what she does but it's not, you understand, what Mr Young would have preferred. Others will form their own view.

On one thing, all will agree. Young displays a formidable literary talent. In

'Tell Mrs Thatcher we'll listen when she does.'

pace and narrative power this book all but qualifies for the airport market — yet never by conceding historical integrity. His style is a delight: '[David] Howell, too, was an economist, but one with a mind not so much open as permanently vulnerable to a succession of opposing certainties . .

Perhaps there are moments when Young is so gripped with the elegance of an idea that the memorable phrase rather tidies up reality. At times Mrs Thatcher is 'at heart a believer and a missionary, to whom beck- oning disaster was cause only to redouble her faith'. At others, he introduces us to 'a singularly "political" politician, well able to depart, where necessary, from what she personally believed to be right'. But the inconsistency is hers, not Young's: for both are true.

The question that haunts this entire work, and will haunt all her biographers, is precisely that. Is 'Thatcherism' a force that has driven Thatcher, or is it a retrospective construct, an attempt to philosophise back- wards over the rather haphazard course of her career? This is not settled by Young and never will be settled. But nor will it often be more intelligently or interestingly discussed. The interest, however, is not entirely to Mr Young's, or Mrs Thatcher's credit. Her reputation has expanded to fill a vacuum. It is significant that the Labour Party hardly features in this account, and is not missed. To some readers, the Prime Minister may emerge as a splendidly second-rate woman in a desert of third, fourth, and fifth-rate men.

On one point only do I find Young badly off-beam: and this concerns Mrs Thatch- er's attitude to 'women's liberation'. Young seems to accept an idea which has got about — has indeed been put about by the Prime Minister herself — that she is not very interested in these matters. But no- body could have fought through the spoken and unspoken prejudice of the Fifties, the giggles and sneers of the Sixties, and the concealed male resentment and subtle male condescension of the Seventies and Eighties, without bearing the scars. Just for once, and here, Mr Young's being an outsider to her party shows. He cannot know what she has put up with.

If Mrs Thatcher does not inwardly burn with a crusading passion for the rights of her own sex, if she is not supremely proud of what she has achieved for women, and if it is not her hope that — without once having asked for special consideration, or offered it to other women — her example as a woman, to women and men, will be a beacon in our history . . . then I am a monkey's uncle. It is vital, central, to her feminist strategy that at no point in her career does she apparently make anything of this. But no one should doubt it. I am really very shocked (dear me — I'm beginning to sound like her) that people cannot see that.