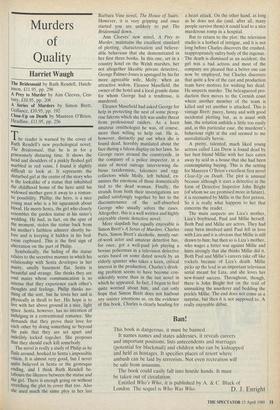 The reader is warned by the cover of Ruth Rendell's new psychological novel, The Bridesmaid, that he is in for a gruesomely disturing time. It shows the head and shoulders of a pinkly fleshed girl marbled in red veins. I found it slightly difficult to look at. It represents the disturbed girl at the centre of the story who is the lookalike of a statue that inhabited the childhood home of the hero until his widowed mother gave it away to a roman- tic possibility. Phillip, the hero, is a nice young man who is a bit squeamish about blood. He meets Senta, the girl who closely resembles the garden statue at his sister's wedding. He had, in fact, on the spur of the moment, stolen the statue back from his mother's faithless admirer shortly be- fore and is keeping it hidden in his bed- room cupboard. This is the first sign of aberration on the part of Philip.

Symbolically, the hiding of the statue relates to the secretive manner in which his relationship with Senta developes in her musty, smelly basement flat. Senta is beautiful and strange. She thinks they are soul mates whose communication is so intense that they experience each other's thoughts and feelings. Philip thinks no- thing of the sort, but he loves her and is physically in thrall to her. His hope is to live with her above ground in a nice, light space. Senta, however, has no intention of indulging in a conventional romance. She demands that they prove their love for each other by doing something so beyond the pale that they are set apart and indelibly locked together. She proposes that they should each kill somebody.

The novel is really a study of Philip as he flails around, hooked to Senta's impossible vision. It is almost very good, but I never quite believed in Senta or the grotesque ending, and I think Ruth Rendell be- labours the likeness between the statue and the girl. There is enough going on without stretching the plot to cover that too. Also she used much the same ploy in her last Barbara Vine novel, The House of Stairs. However, it is very gripping and once started you are unlikely to put The Bridesmaid down.

Ann Cleeves' new novel, A Prey to Murder, maintains the excellent standard of plotting, characterisation and believe- able behaviour that she demonstrated in her first three books. In this one, set in a country hotel on the Welsh marshes, her not altogether likeable private detective, George Palmer-Jones is upstaged by his far more agreeable wife, Molly, when an attractive widow, Eleanor Masefield, the owner of the hotel and a local grande dame for whom George had a tendresse, is murdered.

Eleanor Masefield had asked George for help in protecting the nest of some pereg- rine falcons which she felt was under threat from professional raiders. As a keen amateur ornithologist he was, of course, more than willing to help out. He is, however, distinctly put out when she is found dead, horribly mutilated about the face during a falcon display on her lawn. So George races around the countryside, in the company of a police inspector, in a state of moral outrage interviewing du- bious taxidermists, falconers and egg- collectors while Molly, left behind, ex- amines the emotions of those domestically tied to the dead woman. Finally, the strands from both their investigations are pulled satisfyingly together by her to the discountenance of the self-absorbed George who usually solves the cases. Altogether, this is a well written and highly enjoyable classic detective novel.

More slapdash but equally enjoyable is Simon Brett's A Series of Murders. Charles Paris, Simon Brett's alcoholic, mostly out- of-work actor and amateur detective has, for once, got a well-paid job playing a bovine policeman in a television detective series based on some dated novels by an elderly spinster who takes a keen, critical interest in the production. Charles's drink- ing problem seems to have become con- siderably worse than in the last novel in which he appeared. In fact, I began to feel quite worried about him, and can only hope that Simon Brett does not harbout any sinister intentions as, on the evidence of this book, Charles is clearly heading for

a heart attack. On the other hand, as long as he does not die (and, after all, many people survive them) it could lead to a nice murderous romp in a hospital.

But to return to the plot: the television studio is a hotbed of intrigue, and it is not long before Charles discovers the crushed, inappropriately sultry body of the ingenue. The death is dismissed as an accident; the girl was a bad actress and most of the company are pleased that a better one can now be employed, but Charles discovers that quite a few of the cast and production team have motives for wishing her dead. He suspects murder. The beleaguered pro- duction then moves to the Cornish coast where another member of the team is killed and yet another is attacked. This is vintage Brett: pacey, funny and with good incidental plotting but, as is usual with him, the solution unfolds a little too easily and, in this particular case, the murderer's behaviour right at the end seemed to me unrealistically heroic.

A pretty, talented, much liked young actress called Liza Drew is found dead by her best friend Millie with her face eaten away by acid in a house that she had been contemplating buying. This is the setting for Maureen O'Brien's excellent first novel Close-Up on Death. The plot is unusual because although it stars a detective in the form of Detective Inspector John Bright (of whom we are promised more in future), it is recounted by Millie in the first person. So it is really what happens to her that concerns the reader.

The main suspects are Liza's mother, Liza's boyfriend, Paul and Millie herself. Both Paul and Millie are actors. They had once been involved until Paul fell in love with Liza and it is obvious that Millie is still drawn to him; but then so is Liza's mother, who wages a bitter war against Millie and hints strongly that she thinks Millie did it. Both Paul and Millie's careers take off like rockets because of Liza's death. Millie picks up the lead in an important television serial meant for Liza, and she loves her new-found success. Throughout, though, there is John Bright hot on the trail of unmasking the murderer and bedding the prickly Millie. The end does not come as a surprise, but then it is not supposed to. A really enjoyable debut.