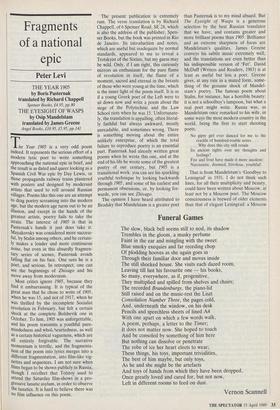 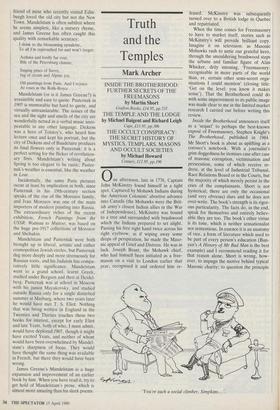 Fragments of a national epic

THE YEAR 1905 by Boris Pasternak translated by Richard Chappell

THE EYESIGHT OF WASPS by Osip Mandelstam translated by James Greene

Thhe Year 1905 is a very odd poem indeed. It represents the serious effort of a modern lyric poet to write something approaching the national epic in brief, and the result is as dated and queer looking as a Spanish Civil War epic by Day Lewis, or those propaganda railway trains plastered with posters and designed by modernist artists that used 'to roll around Russian villages. Poems like this one are an attempt to drag poetry screaming into the modern age, but the modern age turns out to be an illusion, and except in the hands of the greatest artists, poetry fails to take the strain. The interest of 1905 is that in Pasternak's hands it just does take it. Mayakovsky was considered more success- ful, by Stalin among others, and he certain- ly makes a louder and more continuous noise, but even in this absurdly fragmen- tary series of scenes, Pasternak avoids falling flat on his face. One sees he is a poet, and serious. In retrospect, one can see the beginnings of Zhivago and his move away from modernism.

. Most critics ignore 1905, because they find it embarrassing. It is typical of the great man that he chose to write of 1905, when he was 15, and not of 1917, when he was thrilled by the incomplete Socialist revolution in February, but felt a certain shock at the complete Bolshevik one in October. To him, 1905 was unforgettable, and his poem transmits a youthful pure- mindedness and whol,heartedness, as well as a certain historical vagueness, which are all entirely forgivable. The narrative momentum is terrific, and the fragmenta- tion of the poem into lyrics merges into a different fragmentation, into film-like vig- nettes and sequences. I am not sure when films began to be shown publicly in Russia, though I recollect that Tolstoy used to attend the Saturday film-shows in a pro- gressive lunatic asylum, in order to observe the lunatics. It is hard to believe there was no film influence on this poem. The present publication is extremely rum. The verse translation is by Richard Chappell, of 6 Spenser Road, SE 24, which is also the address of the publisher, Spen- ser Books, but the book was printed in Rio de Janeiro. Its introduction and notes, which are useful but inadequate by normal standards, appeared to me to reveal a Trotskyist of the Sixties, but my guess may be wild. Only, if I am right, this curiously mirrors an enthusiasm for the pure flame of revolution in itself, the flame of a moment, sacred and eternal in the breasts of those who were young at the time, which is the inner light of the poem itself. It is as if a young Greek poet of the Left were to sit down now and write a poem about the siege of the Polytechnic and the Law School riots when he was 15. Unfortunate- ly, the translation is appalling, often literal- ly faithful but always awkward, mostly unreadable, and sometimes wrong. There is something moving about the entire unlikely enterprise, of which the total failure to reproduce poetry is an essential part. Pasternak had already written great poems when he wrote this one, and at the end of his life he wrote some of the greatest poetry of our century, but 1905 is a transitional work: you can see his sparkling youthful technique by looking backwards through 1905, and some of his earliest and permanent obsessions, or, by looking for- wards, you can see Zhivago.

The opinion I have heard attributed to Brodsky that Mandelstam is a greater poet than Pasternak is to my mind absurd. But The Eyesight of Wasps is a generous selection by the best Russian translator that we have, and contains greater and more brilliant poems than 1905. Brilliance • and an extreme sharpness of focus are Mandelstam's qualities. James Greene conveys his subtle music extremely well, and the translations are even better than his indispensible version of Pet'. David McDuff (Writers and Readers, 1983) is at least as useful but less a poet. Greene gives, at any rate in a muted form, some- thing of the genuine shock of Mandel- stam's poetry. The famous poem about Stalin, for instance, has a horrible beauty: it is not a schoolboy's lampoon, but what a real poet might write. Russia was, as Mandelstam once remarked to his wife, in some ways the most modern country in the world, being the first to start shooting poets:

No gipsy girl ever danced for me to the crackle of hundred-rouble notes . . . . • . Why does this city still retain Its ancient rights over my thoughts and feelings?

Fire and frost have made it more insolent: Narcissistic, doomed, frivolous, youthful!

That is from Mandelstam's 'Goodbye to Leningrad' in 1931. I do not think such lines, for all their multiplicity and beauty, could have been written about Moscow, at least not by a Moscow poet. The Moscow consciousness is brewed of older elements than that of elegant Leningrad: a Moscow friend of mine who recently- visited Edin burgh loved the old city but not the New Town. Mandelstam is often subtlest where he seems simplest, like a nursery rhyme, and James Greene has often caught this quality with remarkable accuracy:

I drink to the blossoming epaulette, To all I'm reproached for and won't forget: Asthma and lordly fur coat, Bile of the Petersburg climate, Singing pines of Savoy, Jug of cream and Alpine joy, Oil paintings from Paris. And I rejoice At roses in the Rolls-Royce . . .

Mandelstam (or is it James Greene?) is irresistible and easy to quote. Pasternak in 1905 is memorable but hard to quote, and virtually untranslatable. The noises of the sea and the sight and smells of the city are wonderfully netted in a verbal music unre- peatable in any other language. Dickens was a hero of Tolstoy's, who heard him lecture once and kept his portrait, but the city of Dickens and of Baudelaire produces its final flowers only in Pasternak: it is a perfect setting for the flicker of revolution- ary fires. Mandelstam's writing about Spring is too elegant to be rustic; Paster- nak's weather is essential, like the weather in Lear.

Incidentally, the same Paris pictures occur at least by implication in both, since Pasternak in his 19th-century section speaks of the rise of the Morozov family, and Ivan Morozov was one of the main importers of modern painting into Russia. The extraordinary riches of the recent exhibition, French Paintings from the USSR: Watteau to Matisse, was based on the huge pre-1917 collections of Morozov and Shchukin.

Mandelstam and Pasternak were both brought up in liberal, artistic and rather cosmopolitan Jewish circles, but Pasternak dug more deeply and more strenuously for Russian roots, and his Judaism has compa- ratively little significance. Mandelstam went to a grand school, learnt Greek, studied under Bergson and then at Heidel- berg. Pasternak was at school in Moscow with his junior Mayakovsky, and studied outside Russia only for a single disturbed summer at Marburg, where two years later he would have met T. S. Eliot. Nothing that was being written in England in the Twenties and Thirties touches these two books for interest, except for early Eliot and late Yeats, both of who, I must admit, would have deplored 1905, though it might have excited Yeats, and neither of whom would have been overwhelmed by Mandel- stam's sharpness of focus. They would have thought the same thing was available in French, but there they would have been wrong.

James Greene's Mandelstam is a huge expansion and improvement of an earlier book by him. When you have read it, try to get hold of Mandelstam's prose, which is almost more amazing than his sleek poems.