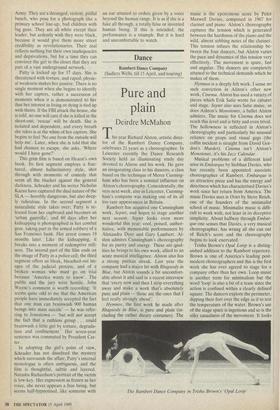 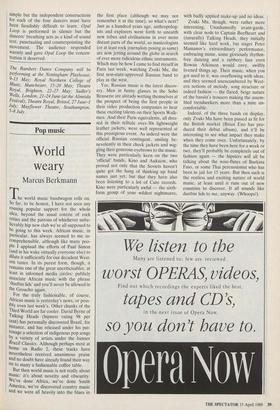 This year Richard Alston, artistic direc- tor of the Rambert Dance Company, celebrates 21 years as a choreographer. In Leicester recently the Dance Research Society held an illuminating study day devoted to Alston and his work. He gave an invigorating class to his dancers, a class based on the technique of Merce Cunning- ham who has been a seminal influence on Alston's choreography. Coincidentally, the very next week, also in Leicester, Cunning- ham's company was making one of its all too rare appearances in Britain.

Rambert has acquired one Cunningham work, Septet, and hopes to stage another next season. Septet looks even more wonderful this year: cool, poised, author- itative, with memorable performances by Alexandra Dyer and Gary Lambert. Al- ston admires Cunningham's choreography for its purity and energy. These are qual- ities he brings to his own work, allied to an acute musical intelligence. Alston also has a strong puritan streak. Last year the company had a major hit with Rhapsody in Blue, but Alston sounds a bit uncomfort- able about it and said in a recent interview that 'every now and then I strip everything away and make a work that's absolutely pure and plain — those are the ones that I feel really strongly about'.

Hymnos, the first work he made after Rhapsody in Blue, is pure and plain (in- cluding the rather dreary costumes). The music is the eponymous .score by Peter Maxwell Davies, composed in 1967 for clarinet and piano. Alston's choreography captures the tension which is generated between the harshness of the piano and the wild, almost sobbing notes of the clarinet. This tension infuses the relationship be- tween the four dancers, but Alston varies the pace and dynamics of this tension very effectively. The movement is spare, fast and angular. The dancers are completely attuned to the technical demands which he makes of them.

Hymnos is a deeply felt work. I sense no such conviction in Alston's other new work, Cinema. Alston has used a variety of pieces which Erik Satie wrote for cabaret and stage. Septet also uses Satie music, as does Ashton's Monotones, a ballet Alston admires. The music for Cinema does not reach this level and is bitty and even trival. The hollowness is reflected in Alston's choreography and particularly his unusual reliance on props and visual gags (the coffin incident is straight from David Gor- don's Murder). Cinema isn't Alston's Monotones, it's his Jazz Calendar.

Musical problems of a different kind arise in Embarque by Siobhan Davies, who has recently been appointed associate choreographer of Rambert. Embarque is an attractive piece and has the energy and directness which has characterised Davies's work since her return from America. The music Davies uses is Octet by Steve Reich, one of the founders of the minimalist school of music. Minimalist music is diffi- cult to work with, not least in its deceptive simplicity. About halfway through Embar- que one senses that Davies, a very musical choreographer, has wrung all she can out of Reich's score and the choreography begins to look enervated.

Trisha Brown's Opal Loop is a disting- uished addition to the Rambert repertory. Brown is one of America's leading post- modern choreographers and this is the first work she has ever agreed to stage for a company other than her own. Loop music is another term for minimalism but the word 'loop' is also a bit of a tease since the action is confined within a clearly defined square. The dancers explore the perimeter, dipping their feet over the edge as if to test the temperature of the water. Brown's use of the stage space is ingenious and so is the silky casualness of the movement. It looks The Rambert Dance Company in Trisha Brown's 'Opal Loop' simple but the independent constructions for each of the four dancers must have been fiendishly difficult to learn. Opal Loop is performed in silence but the dancers' breathing acts as a kind of sound text, punctuating and counterpointing the movement. The audience responded warmly and gave Opal Loop the concen- tration it deserved.