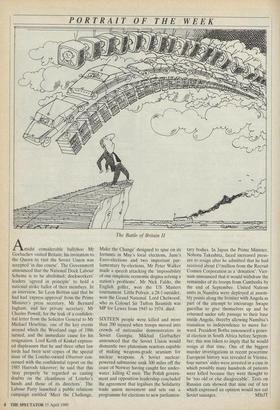 The Battle of Britain II Amidst considerable ballyhoo Mr Gorbachev visited Britain; his invitation to the Queen to visit the Soviet Union was accepted 'in due course'. The Government announced that the National Dock Labour Scheme is to be abolished; dockworkers' leaders 'agreed in principle' to hold a national strike ballot of their members. In an interview, Sir Leon Brittan said that he had had 'express approval' from the Prime Minister's press secretary, Mr Bernard Ingham, and her private secretary, Mr Charles Powell, for the leak of a confiden- tial letter from the Solicitor General to Mr Michael Heseltine, one of the key events around which the Westland saga of 1986 turned, and the immediate cause for his resignation. Lord Keith of Kinkel express- ed displeasure that he and three other law lords had been sent copies of the special issue of the Lonrho-owned Observer con- cerned with the confidential report on the 1985 Harrods takeover; he said that this 'may properly be regarded as casting doubts on the cleanliness of Lonrho's hands and those of its directors'. The Labour Party launched a public relations campaign entitled 'Meet the Challenge, Make the Change' designed to spur on its fortunes in May's local elections, June's Euro-elections and two important par- liamentary by-elections. Mr Peter Walker made a speech attacking the 'impossibility of one simplistic economic dogma solving a nation's problems'. Mr Nick Faldo, the English golfer, won the US Masters tournament. Little Polveir, a 28-1 outsider, won the Grand National. Lord Chelwood, who as Colonel Sir Tufton Beamish was MP for Lewes from 1945 to 1974, died.

SIXTEEN people were killed and more than 200 injured when troops moved into crowds of nationalist demonstrators in Soviet Georgia. Mikhail Gorbachev announced that the Soviet Union would dismantle two plutonium reactors capable of making weapons-grade uranium for nuclear weapons. A Soviet nuclear- powered submarine sank 300 miles off the coast of Norway having caught fire under- water, killing 42 men. The Polish govern- ment and opposition leadership concluded the agreement that legalises the Solidarity trade union movement and sets out a programme for elections to new parliamen- tary bodies. In Japan the Prime Minister, Noboru Takeshita, faced increased, press- ure to resign after he admitted that he had received about /million from the Recruit Cosmos Corporation as a 'donation'. Viet- nam announced that it would withdraw the remainder of its troops from Cambodia by the end of September. United Nations units in Namibia were deployed at assem- bly points along the frontier with Angola as part of the attempt to entourage Swapo guerillas to give themselves up and be returned under safe passage to their base inside Angola, thereby allowing Namibia's transition to independence to move for- ward. President Botha announced a gener- al election in South Africa before Septem- ber; this was taken to imply that he would resign at that time. One of the biggest murder investigations in recent peacetime European history was revealed in Vienna; four nurses' aides were arrested in a case in which possibly many hundreds of patients were killed because they were thought to be 'too old or else disagreeable'. Tests on Russian cats showed that nine out of ten which expressed an opinion would not eat