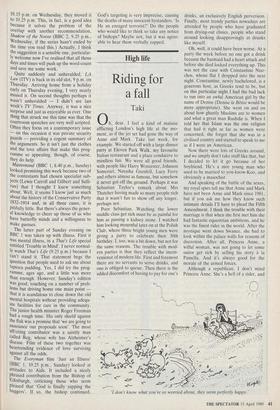 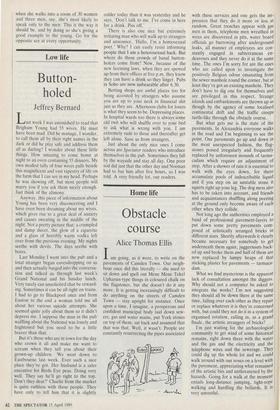 Riding for a fall

Poor Sebastian. Watching the lower middle class get rich must be as painful for him as passing a kidney stone. I watched him looking mournful later on at the Polish Club, where three bright young men were giving a party to celebrate their 30th birthday. I, too, was a bit down, but not for the same reasons. The trouble with mod- ern parties is that they reflect the incon- venience of modern life. First and foremost there are no servants to serve drinks, and one is obliged to queue. Then there is the added discomfort of having to pay for one's drinks, an exclusively English perversion. Finally, most trendy parties nowadays are attended by people who have graduated from drying-out clinics, people who stand around looking disapprovingly at drunks like myself.

Oh, well, it could have been worse. At a party the week before no one got a drink because the barmaid had a heart attack and before she died locked everything up. This was not the case with Constantine Niar- chos, whose flat I dropped into the next night. Constantine, newly bachelored, is a generous host, as Greeks tend to be, but on this particular night I had the bad luck to run into an awful American girl by the name of Denise (Denise la Betise would be more appropriate). She went on and on about how ghastly Muslims are to women and what a great man Rushdie is. When I told her that Islam was the one religion that had it right as far as women were concerned, she forgot that she was in a civilised country and started to speak to me as if I were an American.

Now there were lots of Greeks around, and we simply don't take stuff like that, but I decided to let it go because of her boyfriend. He's a nice young man who used to be married to you-know-Koo, and obviously a masochist.

And speaking of the battle of the sexes, my royal spies tell me that Anne and Mark have not been Anne and Mark since 1981, but if you ask me how they know such intimate details I'll have to plead the Fifth Amendment. I think the trouble with their marriage is that when she first met him she had fantastic equestrian ambitions, and he was the finest rider in the world. After the mystique went down Swanee, she had to look within the palace walls for reasons of discretion. After all, Princess Anne, a wilful woman, was not going to let some suitor get rich by selling his story a la Pamella. And it's always good for the morale of the armed forces.

Although a republican, I don't mind Princess Anne. She's a hell of a rider, and '1 don't know what you're so worried about, they seem perfectly happy.' when she walks into a room of 30 women and three men, say, she's most likely to speak only to the men. This is the way it should be, and by doing so she's giving a good example to the young. Go for the opposite sex at every opportunity.