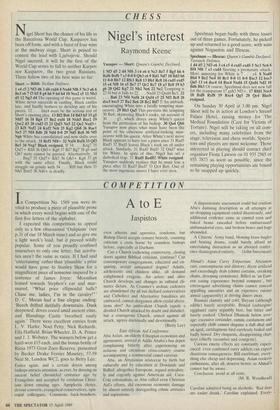 Nigel Short has the chance of his life in the Barcelona World Cup. Kasparov has been off form, and with a burst of four wins at the midway stage, Short is poised to contest the lead with Ljubojevic. Should Nigel succeed, it will be the first of the World Cup series to fall to neither Karpov nor Kasparov, the two great Russians. There follow two of his best wins so far: Short — Ribli: Sicilian Defence.

Speelman began badly with three losses out of three games. Fortunately, he picked up and returned to a good score, with wins against Nogueiras and Illescas.

On Sunday 30 April at 3.00 pm, Nigel Short will be in action at London's Strand Palace Hotel, raising money for The Medical Foundation (Care for Victims of Torture). Nigel will be taking on all com- ers, including many celebrities from the stage, television and chess worlds. Specta- tors and players are most welcome. Those interested in playing should contact chief organiser Fiona Lawson on 01 935 2565 or 935 7873 as soon as possible, since the remaining playing opportunities are bound to be snapped up quickly.