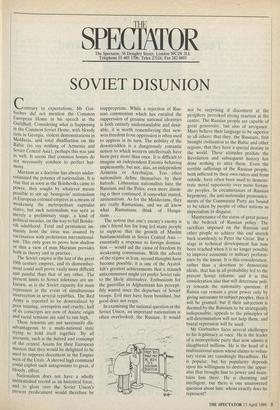 SPECT Thff AT OR

Contrary to expectations, Mr Gor- bachev did not mention the Common European Home in his speech at the Guildhall. Considering what is happening in the Common Soviet Home, with bloody riots in Georgia, violent demonstrations in Moldavia, and total disaffection on the Baltic (to say nothing of Armenia and Soviet Central Asia), perhaps this was just as well. It seems that common homes do not necessarily conduce to perfect har- mony.

Marxism as a doctrine has always under- estimated the potency of nationalism. It is true that as soon as the Bolsheviks came to power, they sought by whatever means possible to stir up 'bourgeois' nationalism in European colonial empires as a means of weakening the metropolitan capitalist states; but such nationalism was seen as merely a preliminary stage, a kind of political measles, on the way to full Bolshe- vik adulthood. Total and permanent im- munity from the virus was assured by vaccination with proletarian international- ism. This only goes to prove how shallow or thin a view of man Marxism provides both in theory and in practice.

The Soviet empire is the last of the great 19th century empires, and its dismember- ment could well prove vastly more difficult and painful than that of any other. The present limits to Soviet tolerance are un- known, as is the Soviet capacity for mass repression in the event of simultaneous insurrection in several republics. The Red Army is reported to be demoralised by poor training, corruption and cruelty; half of its conscripts are now of Asiatic origin and racial tensions are said to run high.

These tensions are not necessarily dis- advantageous to a multi-national state trying to hold itself together. By all accounts, such is the hatred and contempt of the central Asians for their European masters that they would be delighted to be used to suppress discontent in the Empire west of the Urals. A shrewd high command could exploit such antagonisms to great, if bloody, effect.

Nationalism does not have a wholly unblemished record as an historical force, and to gloat over the Soviet Union's• present predicament would therefore be

inappropriate. While a rejection of Rus- sian communism which has entailed the suppression of genuine national identities is both entirely understandable and desir- able, it is worth remembering that new- won freedom from oppression is often used to oppress in its turn. The nobility of the downtrodden is a dangerously romantic notion to which western intellectuals have been prey more than once. It is difficult to imagine an independent Estonia behaving unpleasantly, but not, alas, an independent Armenia or Azerbaijan. Too often nationalists define themselves by their hatreds. Lithuanian nationalists hate the Russians and the Poles; even more alarm- ing is their continued, if somewhat muted, antisemitism. As for the Moldavians, they are really Rumanians, and we all know what Rumanians think of Hunga- rians . . . •

The notion that one's enemy's enemy is one's friend has for long led many people to suppose that the growth of Muslim fundamentalism in Soviet Central Asia essentially a response to foreign domina- tion — would aid the cause of freedom by weakening communism. With the advent of the regime in Iran, second thoughts have become, possible; it is one of the Ayatol- lah's greatest achievements that a staunch anticommunist might yet prefer Soviet rule to the likely alternative. Enthusiasm for the guerrillas in Afghanistan has percept- ibly waned since the departure of Soviet troops. Evil may have been banished, but good does not reign.

In examining the national question in the Soviet Union, an important nationalism is often overlooked: the Russian. It would

not be surprising if discontent at the periphery provoked strong reaction at the centre. The Russian people are capable of great generosity, but also of arrogance. Many believe their language to be superior to all others; that they, the Russians, first brought civilisation to the Baltic and other regions; that they have a special destiny in the world. These attitudes predate the Revolution and subsequent history has done nothing to alter them. Even the terrible sufferings of the Russian people, both inflicted by their own rulers and from outside, have often been used to demons- trate moral superiority over more fortun- ate peoples. In circumstances of Russian hegemony, the anti-nationalist pronounce- ments of the Communist Party are bound to be taken by people of other nations as imperialism in disguise.

Maintenance of the status of great power is the bedrock of Russian policy. The sacrifices imposed on the Russian and other people to achieve this end stretch back seamlessly. to Peter the Great. But a stage in technical development has now been reached when it is no longer possible to improve economic or military perform- ance by the knout. It is this consideration, rather than a devotion to democratic ideals, that has in all probability led to the present Soviet reforms; and it is this consideration also that will determine poli- cy towards the nationality question. If Russia can remain a great power only by giving autonomy to subject peoples, then it will be granted; but if their subjection is deemed by the Russians to be strategically indispensible, appeals to the principles of self-determination will not help them, and brutal repression will be used.

Mr Gorbachev faces several challenges to his legitimacy at once. He is the leader of a monopolistic party that now admits it slaughtered millions. He is the head of a multinational union whose claims to volun- tary status are vanishingly threadbare. He is popular, but his popularity depends upon his willingness to destroy the appar- atus that brought him to power and main- tains him there. He is charming and intelligent, but there is one unanswered question about him: whom exactly does he represent?