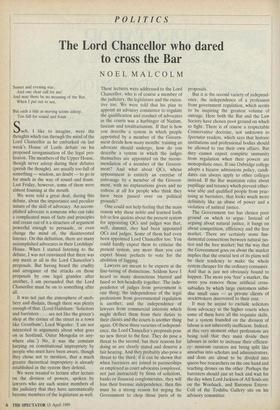 The Lord Chancellor who dared to cross the Bar

Sunset and evening star, And one clear call for me!

And may there be no moaning of the Bar, When I put out to sea, But such a tide as moving seems asleep, Too full for sound and foam . . .

Such, I like to imagine, were the thoughts which ran through the mind of the Lord Chancellor as he embarked on last week's House of Lords debate on his proposed reorganisation of the legal pro- fession. The members of the Upper House, though never asleep during their debates (perish the thought), are usually too full of something — wisdom, no doubt — to go in for much in the way of sound and foam. Last Friday, however, some of them were almost foaming at the mouth.

We were told a great deal, during this debate, about the importance and peculiar nature of the skill of advocacy. An accom- plished advocate is someone who can take a complicated mass of facts and principles and create out of it a structure of argument powerful enough to persuade, or even change the mind of, the disinterested listener. On this definition, there are many accomplished advocates in their Lordships' House. When I started listening to the debate, I was not convinced that there was any merit at all in the Lord Chancellor's proposals. But having heard the crudity and arrogance of the attacks on those proposals by one legal grandee after another, I am persuaded that the Lord Chancellor must be on to something after all.

It was not just the atmosphere of snob- bery and disdain, though there was plenty enough of that. (Lord Hailsham: 'Solicitors and barristers . . . are not like the grocer's shop at the corner of the street in a town like Grantham'; Lord Wigoder: 'I am not interested in arguments about what goes on in Scotland, Outer Mongolia or any- where else.') No, it was the constant harping on constitutional impropriety by people who must have been aware, though they chose not to mention, that a much greater theoretical impropriety is already established in the system they defend.

We were treated to lecture after lecture on the division of powers, spoken by lawyers who are such senior members of the judiciary that they have automatically become members of the legislature as well. These lectures were addressed to the Lord Chancellor, who is of course a member of the judiciary, the legislature and the execu- tive too. We were told that his plan to appoint an advisory committee to regulate the qualification and conduct of advocates in the courts was a harbinger of Nazism, fascism and totalitarianism. If that is how you describe a system in which people _appointed by a member of the Govern- ment decide how many months' training an advocate should undergo, how do you describe a system in which the judges themselves are appointed on the recom- mendation of a member of the Govern- ment? And what about QCs, whose appointment is entirely an exercise of patronage by a member of the Govern- ment, with no explanations given and no redress at all for people who think they have been passed over on political grounds?

One could not help feeling that the main reason why these noble and learned lords felt so few qualms about the present system for appointing QCs and judges was that, well, dammit, they had been appointed QCs and judges. Some of them had even been appointed Lord Chancellor too. You could hardly expect them to criticise the present system, any more than you can expect house prefects to vote for the abolition of fagging.

Lawyers are meant to be experts at the fine-tuning of distinctions. Seldom have I heard so many distinctions blurred and fused so hot-headedly together. The inde- pendence of judges from government is one thing; the independence of the legal professions from governmental regulation is another; and the independence of lawyers from commercial interests which might deflect them from their duties to their clients and the courts is another thing again. Of these three varieties of independ- ence, the Lord Chancellor's proposals pose no new threat to the first. They do pose a threat to the second, but their reasons for doing so are clearly stated and deserve a fair hearing. And they probably also pose a threat to the third; if it can be shown that when barristers are joined in partnerships or employed as court advocates (employed, not just instructed) by firms of solicitors, banks or financial conglomerates, they will lose their forensic independence, then this must be a strong reason for urging the Government to chop those parts of its proposals.

But it is the second variety of independ- ence, the independence of a profession from government regulation, which seems to be inspiring the greatest volume of outrage. Here both the Bar and the Law Society have chosen poor ground on which to fight. There is of course a respectable Conservative doctrine, not unknown to Spectator readers, which says that historic institutions and professional bodies should be allowed to run their own affairs. But they cannot expect complete immunity from regulation when their powers are monopolistic ones. If one Oxbridge college adopts a bizarre admissions policy, candi- dates can always apply to other colleges instead. If the Bar maintains rules about pupillage and tenancy which prevent other- wise able and qualified people from prac- tising as barristers, that looks much more definitely like an abuse of power and a violation of natural justice.

The Government too has chosen poor ground on which to argue. Instead of arguing about natural justice, it bangs on about competition, efficiency and the free market. There are certainly some fun- damental connections between natural jus- tice and the free market; but the way that the Government goes on about the market implies that the crucial test of its plans will be their tendency to make the whole system cheaper for the ordinary consumer. And that is just not obviously bound to happen. The more you 'free' a market, the more you remove those artificial cross- subsidies by which large customers subsi- dise small ones — as private clients of stockbrokers discovered to their cost.

It may be unjust to exclude solicitors from advocacy in the higher courts when some of them have all the requisite skills, but a system founded on the division of labour is not inherently inefficient. Indeed, at this very moment other professions are being told that they must divide their labours in order to increase their efficien- cy: museum curators are being split like amoebas into scholars and administrators, and dons are about to be divided into queen bee researchers on the one hand and teaching drones on the other. Perhaps the barristers should just sit back and wait for the day when Lord Jackson of All Souls sits on the Woolsack, and Baroness Esteve- Coll of the Toshiba Gallery sits on his advisory committee.