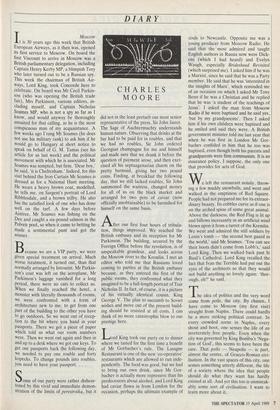 CHARLES MOORE t is 30 years ago this week that British European Airways, as it then was, opened its first service to Moscow. On board the first Viscount to arrive in Moscow was a British parliamentary delegation, including Captain Henry Kerby MP, a blimpish Tory who later turned out to be a Russian spy. This week the chairman of British Air- ways, Lord King, took Concorde here to celebrate. On board was Mr Cecil Parkin- son (who was opening the British trade fair), Mrs Parkinson, various editors, in- cluding myself, and Captain Nicholas Soames MP, who is not a spy so far as I know, and would anyway be thoroughly unsuited for that calling, as he is the most conspicuous man of my acquaintance. A few weeks ago I rang Mr Soames (he does not use his military rank) to ask him if he would go to Hungary at short notice to speak on behalf of G. M. Tamas (see his article for us last week) and the political movement with which he is associated. Mr Soames was tempted, but firm. `Dear boy,' he said, `it is Cheltenham.' Indeed, for this visit behind the Iron Curtain Mr Soames is dressed as for a National Hunt meeting. He wears a heavy brown coat, modelled, he tells me, on Sargent's portrait of Lord Ribblesdale, and a brown trilby. He also has the satisfied look of one who has done well on the turf. A few days before Aintree, Mr Soames was fishing on the Dee and caught a six-pound salmon in the Polveir pool, so when it came to betting he made a sentimental punt and got the winner.

Because we are a VIP party, we were given special treatment on arrival. Much worse treatment, it turned out, than that normally arranged by Intourist. Mr Parkin- son's coat was left on the aeroplane, Mr Parkinson's luggage vanished for a long period, there were no cars to collect us. When we finally reached the hotel, a monster with literally thousands of rooms, we were confronted with a form of architecture new to me: to get from one part of the building to the other you have to go outdoors. So we went out of recep- tion to the bit where you hand in your passports. There we got a piece of paper which told us what our room numbers were. Then we went out again and then in and up to a desk where we got our keys. To get our passports back the following day, we needed to pay one rouble and forty kopecks. To change pounds into roubles, you need to have your passport. . . . • Some of our party were rather dishear- tened by this vivid and immediate demon; stration of the limits of perestroika, but it

did not in the least perturb our most senior representative of the press, Sir John Junor. The Sage of Auchtermuchty understands human nature. Observing that drinks at the bar had to be paid for in roubles, and that we had no roubles, Sir John ordered Georgian champagne for me and himself and made sure that we drank it before the question of payment arose, and then exer- cised all his septuagenarian charm on the pretty barmaid, giving her two pound coins. Finding, at breakfast the following day, that we still lacked roubles, Sir John summoned the waitress, changed money for all of us on the black market and arranged for two pots of caviar (now officially unobtainable) to be furnished for himself on the same basis.

After our first four hours of tribula- tion, things improved. We reached the British embassy and its reception for Mr Parkinson. The building, secured by the Foreign Office before the revolution, is of unspeakable grandeur, and looks across the Moscow river to the Kremlin. I met an editor who told me that Russians loved coming to parties at the British embassy because, as they entered the first of the public rooms, they confronted what they imagined to be a full-length portrait of Tsar Nicholas II. In fact, of course, it is a picture of his virtually identical cousin, King George V. The plan to succumb to Soviet wishes and move out of the present build- ing should be resisted at all costs. I can think of no more catastrophic blow to our prestige here.

Lord King took our party on to dinner where we tasted for the first time a benefit of Mr Gorbachev's rule. The Lasagne Restaurant is one of the new `co-operative' restaurants which are allowed to run inde- pendently. The food was good, but we had to bring our own drink, since Mr Gor- bachev is actually more repressive than his predecessors about alcohol, and Lord King had caviar flown in from London for the occasion, perhaps the ultimate example of coals to Newcastle. Opposite me was a young producer from Moscow Radio. He said that the most admired and taught English authors in Russia now were Dick- ens (which I had heard) and Evelyn Waugh, especially Brideshead Revisited (which surprised me). I asked him if he was a Marxist, since he said that he was a Party member. He said that he was `interested in the insights of Marx', which reminded me of an occasion on which I asked Mr Tony Benn if he was a Christian and he replied that he was `a student of the teachings of Jesus'. I asked the man from Moscow Radio if he were baptised and he said yes, 'but by my grandparents'. Then I asked him if his own children were baptised and he smiled and said they were. A British government minister told me last year that when he was first in London Mr Gor- bachev confided in him that he too was baptised, even though both his parents and grandparents were firm communists. It is an insurance policy, I suppose, the only one that provides for acts of God.

We left the restaurant noisily, throw- ing a few muddy snowballs, and went and walked in the emptiness of Red Square. People had not prepared me for its extraor- dinary beauty. Its cobbles curve as if one is on the arched spine of some great animal. Above the darkness, the Red Flag is lit up and billows incessantly in an artificial wind blown upon it from a turret of the Kremlin. We went and admired the still soldiers by Lenin's tomb — `the second best guard in the world,' said Mr Soames. `You can see their boots didn't come from Lobb's,' said Lord King. Then we walked back past St Basil's Cathedral. Lord King recalled the fact that Ivan the Terrible had put out the eyes of the architects so that they would not build anything so lovely again: `thor- ough, eh?' he said.

The idea of politics and the very word come from polls, the city. By chance, I have come to Moscow (my first visit) straight from Naples. There could hardly be a more striking political contrast. In every crowded scene in Naples, every shout and hoot, one senses the life of an inveterately free people. Even when the city was governed by King Boniba's `Nega- tion of God', this seems to have been the case. That polis — Neapolis — is part, almost the centre, of Graeco-Roman civi- lisation. In the vast spaces of this city, one senses something utterly different, the life of a society where the idea that people should do what they want has hardly existed at all. And yet this too is unmistak- ably some sort of civilisation. I want to learn more about it.