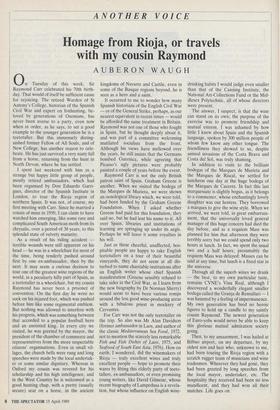 Homage from Rioja, or travels with my cousin Raymond

n Tuesday of this week, Sir 0 Raymond Carr celebrated his 70th birth- day. That would of itself be sufficient cause for rejoicing. The retired Warden of St Antony's College, historian of the Spanish Civil War and expert on foxhunting, be- loved by generations of Oxonians, has never been averse to a party, even now when in order, as he says, to set a good example to the younger generation he is a teetotaller. But this immensely disting- uished former Fellow of All Souls, and of New College, has another reason to cele- brate. He has just survived a very nasty fall from a horse, returning from the hunt in North Devon, where he has settled.

I spent last weekend with him in a strange but happy little group of people, mostly retired ambassadors, which had been organised by Don Eduardo Garri- gues, director of the Spanish Institute in London, to tour the Rioja region of northern Spain. It was not, of course, my first meeting with Carr. Since he married a cousin of mine in 1950, I can claim to have watched him emerging, like some rare and complicated South American moth from its chrysalis, over a period of 38 years, to this splendid state of velvety maturity.

As a result of his riding accident terrible wounds were still apparent on his head — he was in a wheelchair for most of the time, being tenderly pushed around first by one ex-ambassador, then by the next. It may seem a curious decision to tour one of the greatest wine regions of the world, in a peculiarly hilly part of Spain, as a teetotaller in a wheelchair, but my cousin Raymond has never been a prisoner of convention. On the first day he wore no sock on his injured foot, which was pushed before him like some regimental emblem. But nothing was allowed to interfere with his progress, which was something between that accorded to a popular football hero and an anointed king. In every city we visited, he was greeted by the mayor, the president of the chamber of commerce and representatives from the more respectable citizens' organisations. Even in small vil- lages, the church bells were rung and long speeches were made by the local undertak- er or some similar dignitary. Whereas in Oxford my cousin was revered for his scholarship and his high intelligence, and in the West Country he is welcomed as a good hunting chap, with a pretty (usually secure) seat on a horse, in the ancient

kingdoms of Navarre and Castile, even in some of the Basque regions beyond, he is seen as a hero and a saint.

It occurred to me to wonder how many Spanish historians of the English Civil War — or of the General Strike, perhaps, as our nearest equivalent in recent times — would be afforded the same treatment in Britain. Raymond was not one of those who fought in Spain, but he thought deeply about it, and was part of a committee welcoming mutilated socialists from the front. Although his views have mellowed over the years, he still insists that the Germans bombed Guernica, while agreeing that Picasso's ugly pictures were probably painted a couple of years before the event.

Raymond Carr is not the only British patron saint of Spain. Graham Greene is another. When we visited the bodega of the Marques de Murieta, we were shown an oenological library which, we were told, had been funded by the Graham Greene Foundation. When I asked whether Greene had paid for this foundation, they said no, but he had lent his name to it. All over Spain, libraries and institutions of learning are springing up under its aegis. Perhaps he will leave it some royalties in his will.

Just as these cheerful, unaffected, hos- pitable people are happy to take English teetotallers on a tour of their beautiful vineyards, they do not seem at all dis- turbed to name charitable institutions after an English writer whose chief Spanish manifestation (Greene sensibly refused to take sides in the Civil War, as I learn from the new biography by Dr Norman Sherry) would seem to have been various romps around the less good wine-producing areas with a bibulous priest in mockery of Cervantes.

For Carr was not the only teetotaller on the trip. So also was Mr Alan Davidson (former ambassador in Laos, and author of the classic Mediterranean Sea Food, 1972, not to mention the scarcely less remarkable Fish and Fish Dishes of Laos, 1975, and Seafood of South East Asia, 1976). How on earth, I wondered, did the winemakers of Rioja — truly excellent wines and truly excellent people — hope to promote their wares by feting this elderly party of teeto- tallers, ex-ambassadors, or even promising young writers, like David Gilmour, whose recent biography of Lampedusa is a revela- tion, but whose influence on English wine-

drinking habits I would judge even smaller than that of the Canning Institute, the National Art-Collections Fund or the Mid- dlesex Polytechnic, all of whose directors were present.

The answer, I suspect, is that the wine can stand on its own; the purpose of the exercise was to promote friendship and mutual esteem. I was ashamed by how little I knew about Spain and the Spanish language, spoken by 300 million people of whom few know any other tongue. The friendliness they showed to us, despite annual invasions of the Costa Brava and Costa del Sol, was truly shaming.

In addition to visits to the brilliant bodegas of the Marques de Murieta and the Marques de Riscal, we settled for luncheon one day at the huge bodega of the Marques de Caceres. In fact this last marquessate is slightly bogus, as it belongs to a commoner, whose enchantingly lovely daughter was our hostess. They borrowed a marques to give the wine style. When we arrived, we were told, in great embarrass- ment, that the universally loved general manager of this huge concern had died the day before, and as a requiem Mass was planned for him that afternoon they were terribly sorry but we could spend only two hours at lunch. In fact, we spent the usual two and a half hours; presumably the requiem Mass was delayed: Masses can be said at any time, but lunch is a fixed star in the universe.

Through all the superb wines we drank — the best, to my own particular taste, remains CVNE's Vina Real, although I discovered a wonderfully elegant smaller bodega called the Granja de Remulluri — I was haunted by a feeling of impermanence. My own generation has bred no heroic figures to hold up a candle to my saintly cousin Raymond. The newest generation of Euro-yobs would never be able to keep this glorious mutual admiration society going.

Then, to my amazement, I was hailed at Bilbao airport, on my departure, by my oldest son and heir who, unknown to me, had been touring the Rioja region with a scratch rugger team of musicians and wine tradesmen. Wherever they had gone, they had been greeted by long speeches from the local mayor, undertaker, etc. The hospitality they received had been no less munificent, and they had won all their matches. Life goes on.