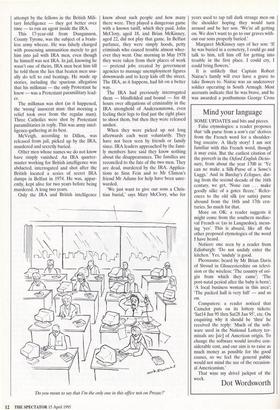 SOME UPDATES and bits and pieces.

False etymologies: a reader proposes that 'silk purse from a sow's ear' derives from the French word for a shoulder- bag souziere. A likely story! I am not familiar with this French word, though it may exist. But the earliest citation of the proverb in the Oxford English Dictio- nary, from about the year 1700 is: 'Ye can ne make a Silk-Purse of a Sowe's Luggs.' And in Barclay's Eclogues, dat- ing from the second decade of the 16th century, we get, 'None can . . . make goodly silke of a gotes fleece.' Refer- ences to the old silk (or satin) purse abound from the 16th and 17th cen- turies. So much for that.

More on OK: a reader suggests it might come from the southern mediae- val French oc (as in Languedoc), mean- ing 'yes'. This is absurd, like all the other proposed etymologies of the word I have heard.

Notices: one seen by a reader from Edinburgh: 'Do not unduly enter the kitchen.' Yes, 'unduly' is good.

Pleonasms: heard by Mr Brian Davis of Stroud in Gloucestershire on televi- sion or the wireless: 'The country of ori- gin from which they came'; 'The post-natal period after the baby is born'; 'A local business woman in this area'; The packed hall is very full' — and so on.

Computers: a reader noticed that Camelot puts on its lottery tickets: Sat14 Jan 95 thru Sat28 Jan 95', etc. On enquiring why it should be `thru' he received the reply: 'Much of the soft- ware used in the National Lottery ter- minals are [sic] of American origin. To change the software would involve con- siderable cost, and our aim is to raise as much money as possible for the good causes, so we feel the general public would not mind the use of the occasion- al Americanism.'

That wins my drivel jackpot of the week.