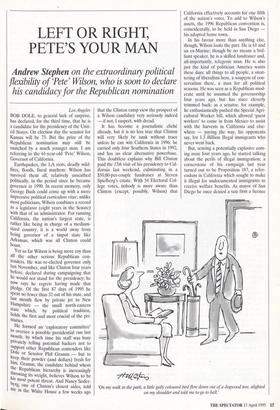 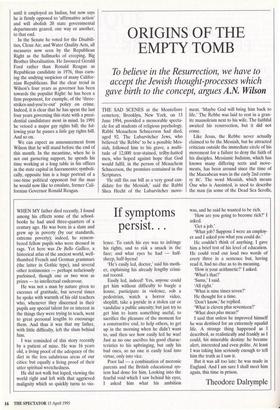 LEFT OR RIGHT, PETE'S YOUR MAN

Andrew Stephen on the extraordinary political

flexibility of 'Pete' Wilson, who is soon to declare his candidacy for the Republican nomination

Los Angeles BOB DOLE, to general lack of surprise, has declared, for the third time, that he is a candidate for the presidency of the Unit- ed States. On election day the senator for Kansas will be 73. But the prize of the Republican nomination may still be snatched by a much younger man. I am referring to the 61-year-old 'Pete' Wilson, Governor of California.

Earthquakes, the LA riots, deadly wild- fires, floods, fiscal mayhem: Wilson has survived them all, relatively unscathed politically, in the period since he became governor in 1990. In recent memory, only George Bush could come up with a more impressive political curriculum vitae; unlike most politicians, Wilson combines a record as a legislator (eight years in the Senate) With that of an administrator. For running California, the nation's largest state, is rather like being in charge of a medium- sized country; it is a world away from being governor of a tinpot state like Arkansas, which was all Clinton could boast.

Yet so far Wilson is being more coy than all the other serious Republican con- tenders. He was re-elected governor only last November, and like Clinton four years before, declared during campaigning that he would not stand for the presidency; he Bow says he regrets having made that Pledge. Of the first 87 days of 1995 he Spent no fewer than 32 out of his state, and last month flew by private jet to New Hampshire — the small north-eastern state which, by political tradition, holds the first and most crucial of the pri- maries.

He formed an 'exploratory committee' to oversee a possible presidential run last Month, by which time his staff was busy Privately telling potential backers not to support other Republican contenders like Dole or Senator Phil Gramm — but to keep their powder (and dollars) fresh for him. Gramm, the candidate behind whom the Republican hierarchy is increasingly throwing its weight, believes Wilson to be !us most potent threat. And Nancy Soder- ° erg, one of Clinton's closest aides, told me in the White House a few weeks ago that the Clinton camp view the prospect of a Wilson candidacy very seriously indeed — if not, I suspect, with dread.

It has become a journalistic cliche already, but it is no less true that Clinton will very likely be sunk without trace unless he can win California in 1996; he carried only four Southern States in 1992, and has no clear alternative powerbase. This doubtless explains why Bill Clinton paid the 17th visit of his presidency to Cal- ifornia last weekend, culminating in a $50,00-per-couple fundraiser at Steven Spielberg's estate. With 54 Electoral Col- lege votes, nobody is more aware than Clinton (except, possibly, Wilson) that

California effectively accounts for one fifth of the nation's votes. To add to Wilson's assets, the 1996 Republican convention is, coincidentally, to be held in San Diego — his adopted home town.

In his favour more than anything else, though, Wilson looks the part. He is 61 and an ex-Marine; though by no means a bril- liant speaker, he is a skilled fundraiser and, all-importantly, telegenic man. He is also just the kind of politician America wants these days: all things to all people, a smat- tering of liberalism here, a soupcon of con- servatism there, a man for all political seasons. He was seen as a Republican Mod- erate until he assumed the governorship four years ago, but has since cleverly trimmed back: as a senator, for example, he enthusiastically pushed the Special Agri- cultural Worker bill, which allowed 'guest workers' to come in from Mexico to assist with the harvests in California and else- where — paving the way, his opponents say, for 1.3 Nihon illegal immigrants who never went back.

But, sensing a potentially explosive com- ing issue four years ago, he started talking about the perils of illegal immigration; a cornerstone of his campaign last year turned out to be Proposition 187, a refer- endum in California which sought to make it illegal for undocumented immigrants to receive welfare benefits. As mayor of San Diego he once denied a taxi firm a licence 'On my walk in the park, a little gaily coloured bird flew down out of a dogwood tree, alighted on my shoulder and told me to go to hell.' until it employed an Indian, but now says he is firmly opposed to 'affirmative action' and will abolish 20 state governmental departments geared, one way or another, to that end.

In the Senate he voted for the Disabili- ties, Clean Air, and Water Quality Acts, all measures now seen by the Republican Right as the hallmarks of creeping, Big Brother liberalisation. He favoured Gerald Ford rather than Ronald Reagan as Republican candidate in 1976, thus earn- ing the undying suspicion of many Califor- nian Republicans. But the clear trend in Wilson's four years as governor has been towards the populist Right: he has been a firm proponent, for example, of the 'three- strikes-and-you're-out' policy on crime. Indeed, it is clear that he has spent the last four years governing this state with a presi- dential candidature most in mind. In 1991 he vetoed a major gay rights bill; the fol- lowing year he passes a little gay rights bill. And so on.

We can expect an announcement from Wilson that he will stand before the end of this month. In the meantime, when he is not out garnering support, he spends his time working at a long table in his offices in the state capital in Sacramento; symboli- cally, opposite him is a huge portrait of a one-time political opponent but the man he would now like to emulate, former Cali- fornian Governor Ronald Reagan.