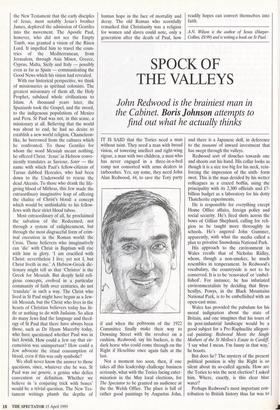 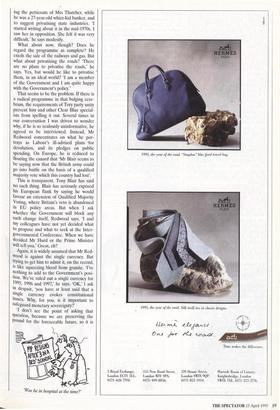 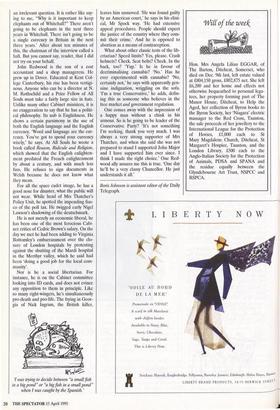 SPOCK OF THE VALLEYS

John Redwood is the brainiest man in

the Cabinet. Boris Johnson attempts to

find out what he actually thinks

IT IS SAID that the Tories need a man without taint. They need a man with broad vision, of towering intellect and right-wing rigour, a man with two children, a man who has never engaged in a three-in-a-bed romp nor consorted with arms dealers in tarbooshes. Yes, say some, they need John Alan Redwood, 44, to save the Tory party if and when the poltroons of the 1922 Committee finally make their way to Downing Street with the revolver on a cushion. Redwood, say his backers, is the dark horse who could come through on the Right if Heseltine once again fails at the last.

Not a moment too soon, then, if one takes all this leadership challenge business seriously, what with the Tories facing exter- mination in the May local elections, for The Spectator to be granted an audience at the the Welsh Office. The place is full of rather good paintings by Augustus John, and there is a Japanese doll, in deference to the tsunami of inward investment that has swept through the valleys.

Redwood sort of slouches towards one and shoots out his hand. His collar looks as though it is a size too big for his neck, rein- forcing the impression of the sixth- form swot. This is the man derided by his wetter colleagues as a crazed boffin, using the principality with its 2,300 officials and £7- billion budget as a laboratory for his dotty Thatcherite experiments.

He is responsible for everything except Home Office affairs, foreign policy and social security. He's fired shots across the bows of Gillian Shephard, calling for reli- gion to be taught more thoroughly in schools. He's angered John Gummer, apparently, with what the media called a plan to privatise Snowdonia National Park.

His approach to the environment in Wales recalls that of Nicholas Ridley, whom, though a non-smoker, he much resembles in temperament. In Redwood's vocabulary, the countryside is not to be conserved. It is to be 'renovated' or 'embel- lished'. For instance, he has infuriated environmentalists by deciding that Bryn- henllys, Powys, in the Black Mountains National Park, is to be embellished with an open-cast mine.

Wales has provided the pabulum for his moral indignation about the state of Britain, and one imagines that his tours of its post-industrial landscape would be a good subject for a Pre-Raphaelite allegori- cal painting: Redwood Meets the Single Mothers of the St Mellon's Estate in Cardiff. 'I say what I mean. I'm funny in that way,' he boasts.

But does he? The mystery of the present political position is why the Right is so silent about its so-called agenda. How are the Tories to win the next election? I asked him. Where, exactly, is this clear blue water?

Perhaps Redwood's most important con- tribution to British history thus far was to tug the petticoats of Mrs Thatcher, while he was a 27-year-old whizz-kid banker, and to suggest privatising state industries. 'I started writing about it in the mid-1970s. I saw her in opposition. She felt it was very difficult,' he says modestly.

What about now, though? Does he regard the programme as complete? He extols the sale of the railways and gas. But what about privatising the roads? 'There are no plans to privatise the roads,' he says. Yes, but would he like to privatise' them, in an ideal world? 'I am a member of the Government and I am quite happy with the Government's policy.'

That seems to be the problem. If there is a radical programme in that bulging cere- brum, the requirements of Tory party unity prevent him and other Clear Blue special- ists from spelling it out. Several times in our conversation I was driven to wonder why, if he is so zealously uninformative, he agreed to be interviewed. Instead, Mr Redwood concentrates on what he por- trays as Labour's ill-advised plans for devolution, and its pledges on public spending. On Europe, he is reduced to floating the canard that 'Mr Blair seems to be saying now that the British army could go into battle on the basis of a qualified majority vote which this country had lost'.

This is transparent. Tony Blair has said no such thing. Blair has seriously exposed his European flank by saying he would favour an extension of Qualified Majority Voting, where Britain's veto is abandoned in EU policy areas. But when I ask Whether the Government will block any such change itself, Redwood says, 'I and my colleagues have not yet decided what to propose and what to seek at the Inter- governmental Conference. When we have decided Mr Hurd or the Prime Minister Will tell you.' Great, eh?

Again, it is widely assumed that Mr Red- wood is against the single currency. But !lying to get him to admit it, on the record, is like squeezing blood from granite. 'I've nothing to add to the Government's posi- tion. We've ruled out a single currency for 1995, 1996 and 1997,' he says. 'OK,' I ask in despair, 'you have at least said that a single currency evokes constitutional issues. Why, for you, is it important to safeguard monetary sovereignty?'

don't see the point of asking that question, because we are preserving the Pound for the foreseeable future, so it is 'Was he in hospital at the time?' an irrelevant question. It is rather like say- ing to me, "Why is it important to keep elephants out of Whitehall?" There aren't going to be elephants in the next three years in Whitehall. There isn't going to be a single currency in Britain in the next three years.' After about ten minutes of this, the chairman of the interview called a halt. But you cannot say, reader, that I did not try on your behalf.

John Redwood is the son of a cost accountant and a shop manageress. He grew up in Dover. Educated at Kent Col- lege Canterbury, his rise has been vertigi- nous. Anyone who can be a director at N. M. Rothschild and a Prize Fellow of All Souls must take a fairly large size in hats. Unlike many other Cabinet ministers, it is no exaggeration to say that he has a politi- cal philosophy. Its nub is Englishness. He shows a certain parsimony in the use of both the English language and the English currency. 'Word and language are the cur- rency. You've got to spend your currency wisely,' he says. At All Souls he wrote a book called Reason, Ridicule and Religion, which showed that the English enlighten- ment predated the French enlightenment by about a century, and with much less fuss. He refuses to sign documents in Welsh because he does not know what they mean.

For all the space cadet image, he has a good nose for disaster, what the public will not wear. While head of Mrs Thatcher's Policy Unit, he spotted the impending fias- co of the poll tax. He twigged early Nigel Lawson's shadowing of the deutschmark.

He is not merely an economic liberal, he has been one of the most ferocious Cabi- net critics of Cedric Brown's salary. On the day we met he had been adding to Virginia Bottomley's embarrassment over the clo- sure of London hospitals by protesting against the shutting of the Mardi hospital in the Merthyr valley, which he said had been `doing a good job for the local com- munity'.

Nor is he a social libertarian. For instance, he is on the Cabinet committee looking into ID cards, and does not evince any opposition to them in principle. Like so many right-wingers, he's simultaneously pro-death and pro-life. The frying in Geor- gia of Nick Ingram, the British killer, was trying to decide between "a small fish in a big pond" or "a big fish in a small pond" when I was caught by the Spanish.' leaves him unmoved. 'He was found guilty by an American court,' he says in his clini- cal, Mr Spock way. `He had extensive appeal procedures. People should expect the justice of the country where they com- mit their crime.' And he is opposed to abortion as a means of contraception.

What about other classic tests of the lib- ertarian? Speed limits? Yes, please. Crash helmets? Check. Seat belts? Check. In the back, too? `Yup.' Is he in favour of decriminalising cannabis? 'No.' Has he ever experimented with cannabis? 'No, certainly not,' he says with apparently gen- uine indignation, wriggling on the sofa. 'I'm a true Conservative,' he adds, defin- ing this as someone who believes in the free market and government regulation.

One comes away with the impression of a happy man without a chink in his armour. So is he going to be leader of the Conservative Party? 'It's not something I'm seeking, thank you very much. I was always a very strong supporter of Mrs Thatcher, and when she said she was not prepared to stand I supported John Major and I have supported him ever since. I think I made the right choice.' One Red- wood ally assures me this is true. 'One day he'll be a very classy Chancellor. He just understands it all.'