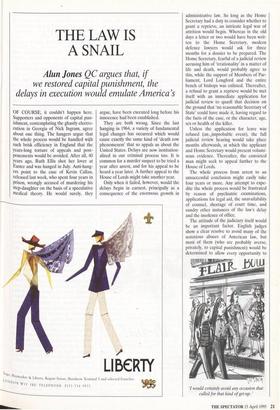 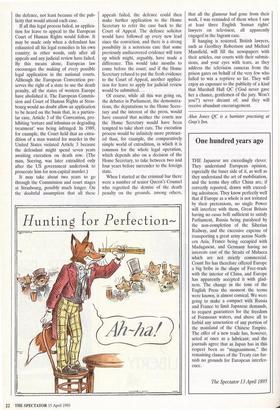 THE LAW IS A SNAIL

Alun Jones QC argues that, if

we restored capital punishment, the delays in execution would emulate America's

OF COURSE, it couldn't happen here. Supporters and opponents of capital pun- ishment, contemplating the ghastly electro- cution in Georgia of Nick Ingram, agree about one thing. The hangers argue that the whole process would be handled wish such brisk efficiency in England that the Years-long torture of appeals and post- ponements would be avoided. After all, 40 Years ago, Ruth Ellis shot her lover at Easter and was hanged in July. Anti-hang- ers point to the case of Kevin Callan, released last week, who spent four years in prison, wrongly accused of murdering his step-daughter on the basis of a speculative medical theory. He would surely, they argue, have been executed long before his innocence had been established.

They are both wrong. Since the last hanging in 1964, a variety of fundamental legal changes has occurred which would cause exactly the same kind of 'death row phenomenon' that so appals us about the United States. Delays are now institution- alised in our criminal process too. It is common for a murder suspect to be tried a year after arrest, and for his appeal to be heard a year later. A further appeal to the House of Lords might take another year.

Only when it failed, however, would the delays begin in earnest, principally as a consequence of the enormous growth in administrative law. So long as the Home Secretary had a duty to consider whether to grant a reprieve, an intricate legal war of attrition would begin. Whereas in the old days a letter or two would have been writ- ten to the Home Secretary, modern defence lawyers would ask for three months for a dossier to be prepared. The Home Secretary, fearful of a judicial review accusing him of 'irrationality' in a matter of life and death, would probably agree to this, while the support of Members of Par- liament, Lord Longford and the entire bench of bishops was enlisted. Thereafter, a refusal to grant a reprieve would be met itself with an immediate application for judicial review to quash that decision on the ground that `no reasonable Secretary of State' could have made it, having regard to the facts of the case, or the character, age, sex or health of the killer.

Unless the application for leave was refused (an .,improbable event), the full judicial review hearing would take place months afterwards, at which the applicant and Home Secretary would present volumi- nous evidence. Thereafter, the convicted man might seek to appeal further to the House of Lords.

The whole process from arrest to an unsuccessful conclusion might easily take four years or more. Any attempt to expe- dite the whole process would be frustrated by reason of psychiatric examinations, applications for legal aid, the unavailability of counsel, shortage of court time, and sundry other instances of the law's delay and the insolence of office.

The attitude of the judiciary itself would be an important factor. English judges show a clear resolve to avoid many of the notorious abuses of American law, but most of them (who are probably averse, privately, to capital punishment) would be determined to allow every opportunity to 'I would certainly avoid any occasion that called for that kind of get-up.' the defence, not least because of the pub- licity that would attend each case.

If all this legal process failed, an applica- tion for leave to appeal to the European Court of Human Rights would follow. It may be made only when a defendant has exhausted all his legal remedies in his own country; in other words, only after all appeals and any judicial review have failed. By this means alone, European law encourages the making of every possible legal application in the national courts. Although the European Convention pre- serves the right of a state to use the death penalty, all the states of western Europe have abolished it. The European Commis- sion and Court of Human Rights at Stras- bourg would no doubt allow an application to be heard on the basis that, in a particu- lar case, Article 3 of the Convention, pro- hibiting 'torture and inhuman or degrading treatment' was being infringed. In 1989, for example, the Court held that an extra- dition of a man wanted for murder in the United States violated Article 3 because the defendant might spend seven years awaiting execution on death row. (The man, Soering, was later extradited only after the US government undertook to prosecute him for non-capital murder.) It may take about two years to go through the Commission and court stages at Strasbourg, possibly much longer. On the doubtful assumption that all these appeals failed, the defence could then make further application to the Home Secretary to refer the case back to the Court of Appeal. The defence solicitor would have followed up every new lead since the conviction, and there is a strong possibility in a notorious case that some previously undiscovered evidence will turn up which might, arguably, have made a difference. This would take months to come before the court; and if the Home Secretary refused to put the fresh evidence to the Court of Appeal, another applica- tion for leave to apply for judicial review would be submitted...

Of course, while all this was going on, the debates in Parliament, the demonstra- tions, the deputations to the Home Secre- tary and the interest of the press, would have ensured that neither the courts nor the Home Secretary would have been tempted to take short cuts. The execution process would be infinitely more protract- ed than, for example, the comparatively simple world of extradition, in which it is common for the whole legal operation, which depends also on a decision of the Home Secretary, to take between two and four years before surrender to the foreign state.

When I started at the criminal bar there were a number of senior Queen's Counsel who regretted the demise of the death penalty on the grounds, among others, that all the glamour had gone from their work. I was reminded of them when I saw at least three English 'human rights' lawyers on television, all apparently engaged in the Ingram case.

If hanging is restored, British lawyers, such as Geoffrey Robertson and Michael Mansfield, will fill the newspapers with their articles, our courts with their submis- sions, and your eyes with tears, as they address the television cameras from the prison gates on behalf of the very few who failed to win a reprieve so far. They will enjoy an exposure to the publicity of a kind that Marshall Hall QC Nod never gave her a chance, gentlemen of the jury. Won't you?') never dreamt of; and they will receive abundant encouragement.

Alun Jones QC is a barrister practising at Gray's Inn.