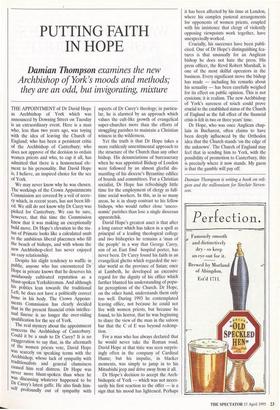 Archbishop of York's moods and methods; they are an odd, but invigorating, mixture

THE APPOINTMENT of Dr David Hope as Archbishop of York which was announced by Downing Street on Tuesday is an extraordinary event. Here is a man who, less than two years ago, was toying with the idea of leaving the Church of England; who has been a persistent critic of the Archbishop of Canterbury; who does not approve of the decision to ordain women priests and who, to cap it all, has admitted that there is a homosexual ele- ment to his personality. But David Hope is, I believe, an inspired choice for the see of York.

We may never know why he was chosen. The workings of the Crown Appointments Commission are covered by a veil of secre- cy which, in recent years, has not been lift- ed. We still do not know why Dr Carey was picked for Canterbury. We can be sure, however, that this time the Commission knew that it was making an exceptionally bold move. Dr Hope's elevation to the sta- tus of Primate looks like a calculated snub to the ambitious liberal placemen who fill the bench of bishops, and with whom the new Archbishop-elect has never enjoyed an easy relationship. Despite his slight tendency to waffle in Public, anyone who has encountered Dr Hope in private knows that he deserves his assiduously cultivated reputation as a blunt-spoken Yorkshireman. And although his politics lean towards the traditional Left, he does not have a politically correct bone in his body. The Crown Appoint- ments Commission has clearly decided that in the present financial crisis intellec- tual finesse is no longer the over-riding qualification for the see of York.

The real mystery about the appointment concerns the Archbishop of Canterbury. Could it be a snub to Dr Carey? It is no exaggeration to say that, in the aftermath of the women priests vote, David Hope was scarcely on speaking terms with the Archbishop, whose lack of sympathy with traditionalists and general clumsiness caused him real distress. Dr Hope was never more blunt-spoken than when he was discussing whatever happened to be br Carey's latest gaffe. He also finds him- self profoundly out of sympathy with aspects of Dr Carey's theology; in particu- lar, he is alarmed by an approach which values the cult-like growth of evangelical super-churches more than the efforts of struggling parishes to maintain a Christian witness in the wilderness.

Yet the truth is that Dr Hope takes a more ruthlessly unsentimental approach to the structure of the Church than any other bishop. His denunciations of bureaucracy when he was appointed Bishop of London were followed by an almost gleeful dis- mantling of his diocese's Byzantine edifice of boards and committees. For a Christian socialist, Dr Hope has refreshingly little time for the employment of clergy as full- time social workers. In this, as in so many areas, he is in sharp contrast to his fellow bishops, who would rather close 'uneco- nomic' parishes than lose a single diocesan apparatchik.

David Hope's greatest asset is that after a long career which has taken in a spell as principal of a leading theological college and two bishoprics he remains a 'man of the people' in a way that George Carey, son of an East Etid hospital porter, has never been. Dr Carey found his faith in an evangelical ghetto which regarded the sec- ular world as the province of Satan; once at Lambeth, he developed an excessive regard for the dignity of his office which further blunted his understanding of popu- lar perceptions of the Church. Dr Hope, on the other hand, understands them only too well. During 1993 he contemplated leaving office, not because he could not live with women priests, but because he found, to his horror, that he was beginning to share the view of the man in the saloon bar that the C of E was beyond redemp- tion.

For a man who has always declared that he would never take the Roman road, David Hope at that tithe was seen surpris- ingly often in the company of Cardinal Hume; but his impulse, in blacker moments, was simply to jump in to his Mitsubishi jeep and drive away from it all.

Dr Hope's decision to accept the Arch- bishopric of York — which was not neces- sarily his first reaction to the offer — is a sign that his mood has lightened. Perhaps it has been affected by his time at London, where his complex pastoral arrangements for opponents of women priests, coupled with his insistence that clergy of violently opposing viewpoints work together, have unexpectedly worked.

Crucially, his successes have been publi- cised. One of Dr Hope's distinguishing fea- tures is that unusually for an Anglican bishop he does not hate the press. His press officer, the Revd Robert Marshall, is one of the most skilful operators in the business. Every significant move the bishop has made — including his remarks about his sexuality — has been carefully weighed for its effect on public opinion. This is not cynicism; it is realism. The new Archbishop of York's sureness of touch could prove crucial to the established status of the Church of England as the full effect of the financial crisis is felt in two or three years' time.

Dr Hope, who was once Anglican chap- lain in Bucharest, often claims to have been deeply kfluenced by the Orthodox idea that the Church stands 'on the edge of the unknown'. The Church of England may feel that in sending him to York, with the possibility of promotion to Canterbury, this is precisely where it now stands. My guess is that the gamble will pay off.

Damian Thompson is writing a book on reli- gion and the millennium for Sinclair Steven- son.