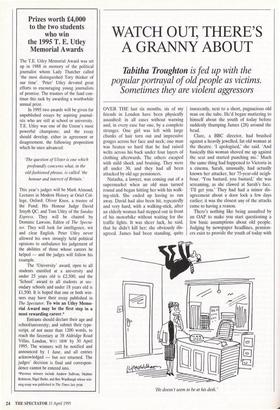 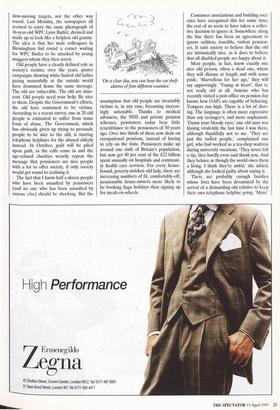 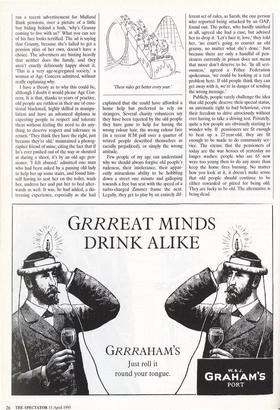 WATCH OUT, THERE'S A GRANNY ABOUT

Tabitha Troughton is fed up with the

Sometimes they are violent aggressors

OVER THE last six months, six of my friends in London have been physically assaulted: in all cases without warning and, in every case bar one, by a complete stranger. One girl was left with large chunks of hair torn out and impressive gouges across her face and neck; one man was beaten so hard that he had raised welts across his back under four layers of clothing afterwards. The others escaped with mild shock and bruising. They were all under 30, and they had all been attacked by old age pensioners.

Natasha, a lawyer, was coming out of a supermarket when an old man turned round and began hitting her with his walk- ing-stick. She ended up having to run away. David had also been hit, repeatedly and very hard, with a walking-stick, after an elderly woman had stepped out in front of his motorbike without waiting for the traffic lights. It was sheer luck, he said, that he didn't kill her; she obviously dis- agreed. James had been standing, quite innocently, next to a short, pugnacious old man on the tube. He'd began muttering to himself about the youth of today before suddenly thumping James (28) around the head.

Clare, a BBC director, had brushed against a heavily jewelled, fat old woman at the theatre. 'I apologised,' she said. 'And basically this woman shoved me up against the seat and started punching me.' Much the same thing had happened to Victoria in a cinema. Sarah, unusually, had actually known her attacker, her 75-year-old neigh- bour. 'You bastard, you bastard,' she was screaming, as she clawed at Sarah's face. 'I'll get you.' They had had a minor dis- agreement about a door lock a few days earlier; it was the closest any of the attacks came to having a reason.

There's nothing like being assaulted by an OAP to make you start questioning a few basic assumptions about old people. Judging by newspaper headlines, pension- ers exist to provide the youth of today with

slow-moving targets, not the other way round. Last Monday, the newspapers all seemed to carry the same photograph of 36-year-old WPC Lynn Butler, dressed and made up to look like a helpless old granny. The idea is that her male colleagues in Birmingham hid round a corner waiting for WPC Butler to be attacked by young muggers whom they then arrest.

Old people have a clearly defined role as society's victims; over the years, poster campaigns showing white-haired old ladies gazing mournfully at the outside world have drummed home the same message. The old are vulnerable. The old are inno- cent. Old people need your help. Be nice to them. Despite the Government's efforts, the old have continued to be victims. According to a recent survey, one in 20 old people is estimated to suffer from some form of abuse. The Government, which has obviously given up trying to persuade people to be nice to the old, is starting telephone helplines for the abused elderly instead. In October, guilt will be piled upon guilt, as the calls come in and the age-related charities wearily repeat the message that pensioners are nice people with a lot to offer society, if only society would get round to realising it.

The fact that I know half a dozen people Who have been assaulted by pensioners (and no one who has been assaulted by anyone else) should be shocking. But the 'On a clear day, you can hear the car theft- alarms of four different counties.'

assumption that old people are invariably victims is, in any case, becoming increas- ingly untenable. Thanks to medical advances, the NHS and private pension schemes, pensioners today bear little xesemblance to the pensioners of 50 years ago. Over two thirds of them now draw on occupational pensions, instead of having to rely on the state. Pensioners make up around one sixth of Britain's population, but now get 40 per cent of the 122 billion spent annually on hospitals and communi- ty health care services. For every house- bound, poverty-stricken old lady, there are increasing numbers of fit, comfortably-off, pensionable house-owners more likely to be booking Saga holidays than signing up for meals-on-wheels. Consumer associations and building soci- eties have recognised this for some time; the rest of us seem to have taken a collec- tive decision to ignore it. Somewhere along the line there has been an agreement to ignore ruthless, irascible, violent pension- ers. It suits society to believe that the old are intrinsically nice, as it does to believe that all disabled people are happy about it.

Most people, in fact, know exactly one nice old person, often a dead one, whom they will discuss at length and with some pride. 'Marvellous for her age,' they will say approvingly. 'Young at heart', that is, not really old at all. Anyone who has recently visited a post office on pension day knows how OAPs are capable of behaving. Tempers run high. There is a lot of shov- ing. The language is often more expressive than any teenager's, and more unpleasant. 'Damn your bloody eyes,' one old man was hissing virulently the last time I was there, although thankfully not to me. 'They are just the rudest people,' complained one girl, who had worked as a tea-shop waitress during university vacations. 'They never left a tip, they hardly even said thank you. And they behave as though the world owes them a living. I think they're awful,' she added, although she looked guilty about saying it.

There are probably enough families whose lives have been devastated by the arrival of a demanding old relative to keep their own telephone helpline going. 'Mum,' ran a recent advertisement for Midland Bank pensions, over a picture of a little boy hiding behind a bath, 'why's Granny coming to live with us?' What you can see of his face looks terrified. The ad is saying that Granny, because she's failed to get a pension plan of her own, doesn't have a choice. The advertisers are hinting heavily that neither does the family, and they aren't exactly deliriously happy about it. 'This is a very age-segregated society,' a woman at Age Concern admitted, without really explaining why.

I have a theory as to why this could be, although I doubt it would please Age Con- cern. It is that, thanks to years of practice, old people are ruthless in their use of emo- tional blackmail, highly skilled in manipu- lation and have an advanced diploma in expecting people to respect and tolerate them without feeling the need to do any- thing to deserve respect and tolerance in return. 'They think they have the right, just because they're old,' maintained a photog- rapher friend of mine, citing the fact that if he's ever pushed out of the way or shouted at during a shoot, it's by an old age pen- sioner. 'I felt abused,' admitted one man who had been asked by a passing old lady to help her up some stairs, and found him- self having to seat her on the toilet, wash her, undress her and put her to bed after- wards as well. It was, he had added, a dis- tressing experience, especially as she had 'These rides get better every year' explained that she could have afforded a home help but preferred to rely on strangers. Several charity volunteers say they have been rejected by the old people they have gone to help for having the wrong colour hair, the wrong colour face (in a recent ICM poll over a quarter of retired people described themselves as racially prejudiced), or simply the wrong attitude.

Few people of my age can understand why we should always forgive old people's rudeness, their intolerance, their appar- ently miraculous ability to be hobbling down a street one minute and galloping towards a free bus seat with the speed of a turbo-charged Zimmer frame the next. Legally, they get to play by an entirely dif- ferent set of rules, as Sarah, the one person who reported being attacked by an OAP, found out. The police, who hardly smirked at all, agreed she had a case, but advised her to drop it. 'Let's face it, love,' they told her, 'no court's going to convict an old granny, no matter what she's done.' Just because there are only a handful of pen- sioners currently in prison does not mean that more don't deserve to be. 'In all seri- ousness,' agreed a Police Federation spokesman, 'we could be looking at a real problem here. If old people think they can get away with it, we're in danger of sending the wrong message.'

Publicly, people rarely challenge the idea that old people deserve their special status, an automatic right to bad behaviour, even their freedom to drive atrociously without ever having to take a driving test. Privately, quite a few people are obviously starting to wonder why. If pensioners are fit enough to beat up a 27-year-old, they are fit enough to be made to do community ser- vice. The excuse that the pensioners of today are the war heroes of yesterday no longer washes: people who are 65 now were too young then to do any more than keep the home fires burning. No matter how you look at it, it doesn't make sense that old people should continue to be either rewarded or pitied for being old. They are lucky to be old. The alternative is being dead.