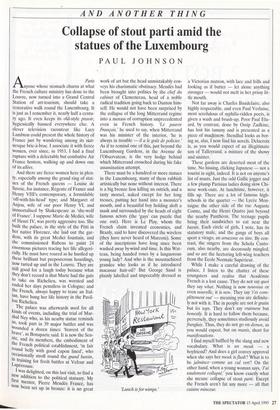 Collapse of stout parti amid the statues of the Luxembourg

yone whose stomach churns at what the French culture ministry has done to the Louvre, now turned into a Grand Central Station of art-tourism, should take a restorative walk round the Luxembourg. It is just as I remember it, nearly half a centu- ry ago. It even keeps its old-style pissoir, hygienically banned everywhere else. A clever television raconteur like Lucy Lambton could present the whole history of France just by wandering among its stat- uesque bric-a-brac. I associate it with fierce women, ever since, in 1953, I had a final rupture with a delectable but combative Air France hostess, walking up and down one of its alias.

And there are fierce women here in plen- ty, especially among the grand ring of stat- ues of the French queens — Louise de Savoie, for instance, Regente of France and Henry VIII's contemporary, a formidable 'off-with-his-head' type; and Margaret of Anjou, wife of our poor Henry VI, and Immortalised by Shakespeare as 'she-wolf of France'. I suppose Marie de Medici, wife of Henri IV, was pretty aggressive too. She built the palace, in the style of the Pitti in her native Florence, she laid out the gar- dens, with its great Medici fountain, and she commissioned Rubens to paint 24 enormous pictures tracing her life allegori- cally. He must have roared as he hustled up these brilliant but preposterous hoardings, now tarted up and in the Louvre. They are Still good for a laugh today because what they don't record is that Marie had the guts to take on Richelieu, was worsted and ended her days penniless in Cologne; and the French, always happy to tease an Ital- ian, have hung her life history in the Pavil- ion Richelieu.

. The palace was afterwards used for all kinds of events, including the trial of Mar- shal Ney who, as his nearby statue reminds US, took part in 39 major battles and was wounded a dozen times: 'bravest of the brave', as Bonaparte said. It is now the Sen- ate, and its members, the embodiment of the French political establishment, 'in fair round belly with good capon lined', who o. ccasionally stroll round the grand bassin, in training for fresh battles at Vefour and Laperrouse.

I was delighted, on this last visit, to find a flew addition to the political statuary. My irst mentor, Pierre Mendes France, has now been set up in bronze: it is no great work of art but the head unmistakably con- veys his charismatic obstinacy. Mendes had been brought into politics by the chef du cabinet of Clemenceau, head of a noble radical tradition going back to Danton him- self. He would not have been surprised by the collapse of the long Mitterrand regime into a morass of corruption unprecedented even in French history. 'Le pauvre Francois,' he used to say, when Mitterrand was his minister of the interior, 'he is always in trouble — il a le goat de policier.' As if to remind one of this, just beyond the Luxembourg Gardens, in the Avenue de l'Observateur, is the very hedge behind which Mitterrand crouched during his fake assassination attempt.

There must be a hundred or more statues in the Luxembourg, many of them rubbish artistically but none without interest. There is a big bronze lion killing an ostrich, and a tasty morsel, naked except for her long tresses, putting her hand into a monster's mouth, and a beautiful boy holding aloft a mask and surrounded by the heads of eight famous actors (the 'gays' can puzzle that one out). Here is Le Play, whom the French claim invented economics, and Branly, said to have discovered the wireless (they have never heard of Marconi). Some of the inscriptions have long since been washed away by4vind and time. Is this Wat- teau, being handed roses by a languorous young lady? And who is the moustachioed grandee who looks as if he introduced macassar hair-oil? But George Sand is plainly labelled and impeccably dressed as 'Lunch is for wimps.' a Victorian matron, with lace and frills and looking as if butter — let alone anything stronger — would not melt in her prissy lit- tle mouth.

Not far away is Charles Baudelaire, also highly respectable, and even Paul Verlaine, most scrofulous of syphilis-ridden poets, is given a wash and brush-up. Poor Paul Elu- ard, by contrast, done by Ossip Zadkine, has lost his tummy and is presented as a piece of mashinery. Stendhal looks as bor- ing as, alas, I now find his novels. Delacroix is, as you would expect of an illegitimate son of Talleyrand, a mixture of the showy and sinister.

These gardens are deserted most of the time. No hissing, clicking Japanese — not a tourist in sight, indeed. It is not on anyone's list of musts. Just the odd Gallic jogger and a few plump Parisian ladies doing slow Chi- nese work-outs. At lunchtime, however, it fills up. There are a lot of famous high- schools in the quarter — the Lye& Mon- taigne the other side of the rue Auguste Comte, and the Henri Quatre just beyond the nearby Pantheon. The teenage pupils bring their sandwiches to eat near the bassin. Each circle of girls, I note, has its statutory male, and the gangs of boys all sport a virago, an amazone en titre. By con- trast, the singers from the Schola Canto- rum, also nearby, are decorously mingled, and so are the hectoring left-wing teachers from the Ecole Normale Superieur.

While I make a careful drawing of the palace, I listen to the chatter of these youngsters and realise that Academie French is a lost cause. They do not say quoi they say what. Nothing is now nouveau or even nouvelle, it is new. They say Yes com- pletement out' — meaning you are definite- ly not with it. The in people are not le gratin but les tops. They don't say vraiment but honestly. It is hard to follow them because, perversely, they sometimes studiously avoid franglais. Thus, they do not go on demos, as you would expect, but on minis, short for manifestations.

I find myself baffled by the slang and new vocabulary. What is un meuk — a boyfriend? And does a girl convey approval when she says her meuk is flash? What is to be jalmince. comme un cut vert? On the other hand, when a young woman says, Tai totalement collapse,' you know exactly what she means: collapse of stout parti. Except the French aren't fat any more — all that cuisine minceur.