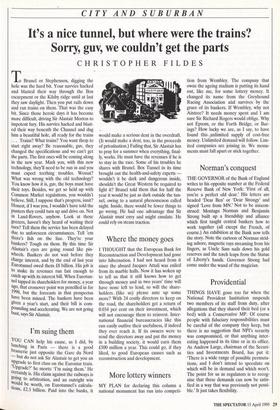 It's a nice tunnel, but where were the trains?

Sorry, guy, we couldn't get the parts

TBrunel or Stephenson, digging the hole was the hard bit. Your navvies hacked and blasted their way through the Box escarpment or the Kilsby ridge until at last they saw daylight. Then you put rails down and ran trains on them. That was the easy bit. Since those heroic days it has become more difficult, driving Sir Alastair Morton to impotent fury. His navvies hacked and blast- ed their way beneath the Channel and dug him a beautiful hole, all ready for the trains . . . Trains? What trains? You want them to start right away? Be reasonable, guy, they changed the specifications and we can't get the parts. The first ones will be coming along in the new year. Mark you, with this new technology, they'll need to be run in and you must expect teething troubles. Wossat? What was wrong with the old technology? You know how it is, guy, the boys must have their toys. Besides, we get so held up with Common Market regulations, you wouldn't believe. Still, I suppose that's progress, innit? Honest, if I was you, I wouldn't have told the Punters they could turn up and drive on. Not in Land-Rovers, anyhow. Look at those geezers, haven't they heard of waiting their turn? Tell them the service has been delayed due to unforeseen circumstances. Tell 'em there's fish on the line. They're your bankers? Tough on them. By this time Sir Alastair's eyes are going round like pin- wheels. Bankers do not wait before they Charge interest, and by the end of last year Eurotunnel owed them £8 billion. His job" is to make its revenues run fast enough to catch up with its interest bill. When Eurotun- nel tapped its shareholders for money, a year ago, that crossover point was pencilled in for 1998, but the forecasts in that prospectus have been missed. The bankers have been given a year's start, and their bill is com- pounding and accelerating. We are not going bust, says Sir Alastair.

YOU CAN help his cause, as I did, by lunching in Paris — there is a good brasserie just opposite the Gare du Nord — but do not ask Sir Alastair to get you an Upgrade to first class on the Eurostar train. 'Upgrade?' he snorts: `I'm suing them.' He certainly is. His claim against the railways is going to arbitration, and an outright win would be worth, on Eurotunnel's calcula- tions, £2.3 billion. Paid into the banks, it would make a serious dent in the overdraft. (It would make a dent, too, in the proceeds of privatisation.) Failing that, Sir Alastair has to pray for a summer when everything, final- ly, works. He must have the revenues if he is to stay in the race. Some of his troubles he shares with Brunel. Box Tunnel in its time brought out the health-and-safety experts — wouldn't it be dark and dangerous inside, shouldn't the Great Western be required to light it? Brunel told them that for half the year it would be just as dark outside the tun- nel, owing to a natural phenomenon called night. Inside, there would be fewer things to go wrong. He had one advantage that Sir Alastair must envy and might emulate. He could rely on steam traction.

Where the money goes

I THOUGHT that the European Bank for Reconstruction and Development had gone into hibernation. I had not heard from it since the absurd Jacques Attali was exiled from its marble halls. Now it has woken up to tell us that it still knows how to get through money and in two years' time will have none left to lend, so will the share- holders_ (like us) please ante up some more? With 24 costly directors to keep on the road, the shareholders get a return of 0.034 per cent on their investment, which will not encourage them to reinvest. Inter- national financial bureaucracies like this can easily outlive their usefulness, if indeed they ever reach it. If its owners were to send the directors away and put the money in a building society, it would earn them £500 million a year. This could go, if they liked, to good European causes such as reconstruction and development.

MY PLAN for declaring this column a national monument has run into competi- tion from Wembley. The company that owns the ageing stadium is putting its band out, like me, for some lottery money. It changed its name from the Greyhound Racing Association and survives by the grace of its bankers. If Wembley, why not Aintree? It needs money spent and I am sure Sir Richard Rogers would oblige. Why not Epsom, or the Forth Bridge, or air- ings? How lucky we are, as I say, to have found this pnlimited supply of cost-free money. Unlimited demand will follow. Lim- ited companies are joining in. We monu- ments must fall apart or stick together.

THE GOVERNOR of the Bank of England writes to his opposite number at the Federal Reserve Bank of New York: 'First of all, you're a perfect old dear.' His letters are headed 'Dear Ben' or 'Dear Strongy' and signed 'Love from MN.' Not to be miscon- strued: Montagu Norman and Benjamin Strong built up a friendship and alliance which first taught central bankers how to work together (all except the French, of course.) An exhibition at the Bank now tells the story. Note the cartoon of Norman strid- ing ashore, magnetic rays streaming from his fingers, as Uncle Sam nails down his gold reserves and the torch leaps from the Statue of Liberty's hands. Governor Strong had come under the wand of the magician.

THINGS HAVE gone too far when the National Provident Institution suspends two members of its staff from duty, after allegations that they shared their bed (or a bed) with a Conservative MP. Of course people with fiduciary responsibilities must be careful of the company they keep, but there is no suggestion that NPI's security was compromised, or that anything inter- esting happened in its time or in its office. As Andrew Large, chairman of the Securi- ties and Investments Board, has put it: 'There is a wide range of possible permuta- tions, and I. don't intend to speculate on which will be in demand and which won't. The point for us as regulators is to recog- nise that these demands can now be satis- fied in a way that was previously not possi- ble.' It just takes flexibility.