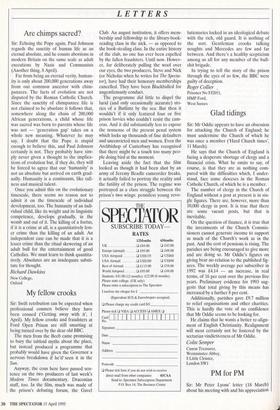 Sir: Echoing the Pope again, Paul Johnson regards the sanctity of human life as an eternal absolute, and he counts abortions in modern Britain on the same scale as adult executions by Nazis and Communists (Another thing, 8 April).

Far from being an eternal verity, human- ity is only about 200,000 generations away from our common ancestor with chim- panzees. The facts of evolution are not disputed by the Roman Catholic Church. Since the sanctity of chimpanzee life is not claimed to be absolute it follows that, somewhere along the chain of 200,000 African generations, a child whose life was sacred was born to parents whose life was not — 'generation gap' takes on a whole new meaning. Whatever he may say, I doubt that the Pope is stupid enough to believe this, and Paul Johnson certainly is not. They probably have sim- ply never given a thought to the implica- tions of evolution but, if they do, they will be forced to agree that our 'humanity' is not an absolute but arrived on earth grad- ually. Humanity is a continuum, like tall- ness and musical talent.

Once you admit this on the evolutionary timescale, there seems no reason not to admit it on the timescale of individual development, too. The humanity of an indi- vidual child, like its weight and its linguistic competence, develops gradually, in the womb and out of it. The killing of a foetus, if it is a crime at all, is a quantitatively less- er crime than the killing of an adult. An independent case can be made that it is a lesser crime than the ritual skewering of an adult bull for the entertainment of good Catholics. We must learn to think quantita- tively. Absolutes are an inadequate substi- tute for thought.