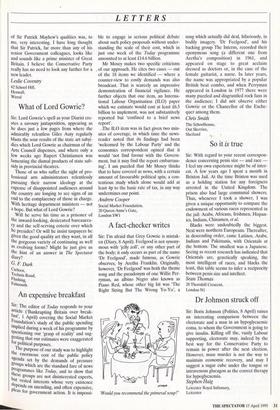 Sir: Boris Johnson (Politics, 8 April) raises an interesting comparison between the electorate and a man in an hypoglycaemic coma, to whom the Government is going to give insulin. Killing off the, vastly Labour supporting, electorate may, indeed by the best way for the Conservative Party to remain in power after the next election. However, mass murder is not the way to maintain economic recovery, and may I suggest a sugar cube under the tongue or intravenous glucagon as the correct therapy for hypoglycaemia.